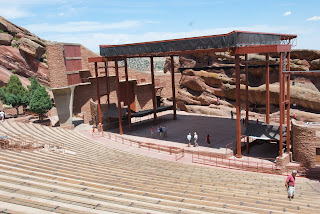 I drove out to Denver twice this summer to go see two different concerts at Red Rocks and also a great music festival. If you haven’t seen a concert at Red Rocks, you should really pull up their schedule of events next spring and plan a trip out there. It is an absolutely beautiful venue to see a concert.

Red Rocks is in Morrison, about 15 miles from Denver. Built by the Works Project Administration (WPA) and Civilian Conservation Corps (CCC), it was dedicated on June 15, 1941 and hosted shows ever since. The natural amphitheatre consists of two 300-foot sandstone rocks on each side – Ship Rock and Creation Rock. Look – just go see it. It is wonderful.

I’ve been to a reasonable number of concerts in my lifetime and one of the expectations any time you go to almost any kind of show is that there is going to be a hint of the fragrance of marijuana in the crowd. I had two different experiences on that front at Red Rocks.

The first show I went to see was Big Head Todd and the Monsters. Really good live performers. Rock with a soul of the blues throughout. The lead singer, Todd Park Mohr, has a great, low base voice and is one of my favorites. Since they were originally from Colorado, I expected an excellent show. I wasn’t disappointed.

The show was supposed to start at 7 p.m. No opening act. This being mid-summer, the sun was still well up in the sky when I arrived around 6:30 or so to grab a beer and take my seat, which was about 40 rows up from the stage. I met my seat neighbors and had a nice conversation about Denver and the music scene there and the band took the stage around 7:30. Now at a normal concert, the band would take the stage, the lights in the auditorium would dim, and people would take that as their signal to light up.

Outside concert. The sun was still up. No lights to dim.

Apparently, that wasn’t a problem for the smokers in the crowd, of which there were many. I think I saw more joints lit up in my immediate vicinity that an any other concert I’ve ever been to before.

I looked around and almost laughed out loud. I got the distinct impression that there was an unspoken agreement between the audience and the cops and security guards – stay cool, don’t cause a scene, and no one gets arrested or gets their dope taken from them. I’d never been to a concert in Amsterdam before. These Dutch folks rocked!

And I’ve got to say that there are a number of images that immediately draw a smile to my face. One of those is when I see an old couple (not just older – truly old – 75+ years old) holding hands in public or otherwise overtly showing that they are still very much in love. No matter my mood, it warms be up immediately. I added another image to that list at this concert.

Music brings back vivid memories in my mind — and I knew this was going to be one of those nights.

People in their 50s and 60s toking a nice, long hit at a concert. I don’t know what it is about that image that just brought a smile to my face. In fact, I’m smiling right now as I type, just remembering it.

I think if the same people were getting high at a house party, it probably would resonate with me as being more pathetic than anything, but at a concert, it seemed great. It was as if the people that had their formative years in the 60s and early 70s were briefly able to take a time machine back to their youth. The pleasure of their memory and their enjoyment of the moment they were in was contagious. I don’t smoke, but I still think I managed to get a pleasant contact high – not just from the smoke waifing around me, but just from being in close contact to people having that much fun. 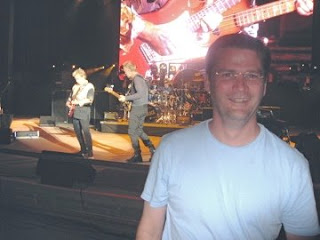 Me and The Police

A few other random thoughts and experiences from that show. Why is it that woman, much more than men, seem to have a visceral reaction to music? Women everywhere in the crowd were dancing, singing, shouting, and swaying to the music. This obviously wasn’t the first time I’d see this reaction before – go to any club and see the difference on the dance floor. Woman are out there dancing with abandon because they actually feel the music – guys are out there dancing merely in the hope of getting laid by one of the women that really gets taken away.

What I find strange about that is that music, or specifically its effect on people, wouldn’t seem to be a normal dividing line between the sexes. The male enjoyment of watching sports for hours on end on the couch verses the normal female distaste of the immense waste of time that entails? Sure, that makes sense. The joy a woman gets from shopping for whatever makes her happy verses the guy’s inevitable reaction of “you need another pair of black shoes?” Sure, that seems like a logical dividing line. But the different reactions to music make less sense to me.

I also heard a line from a guy in a bathroom that I thought was classic. As we were lined up at the urinals, he turns to his buddy next to him and says, “this will be Keystone Light by Thursday.” It reminded me of one of my favorite Monty Python jokes: “Why is American beer like making love in a canoe? Because both are fucking close to water.”

The second concert I went to was an entirely different experience. After I went to the Mile High Music Festival (www.milehighfestival.com) over the weekend, I heard that the Police were going to play Red Rocks that Monday night. I contact a local ticket scalper, and since I was a single, managed to luck into a front row seat.

Before I move on, the Mile High Music Festival is another experience I highly recommend. This was the first year of this festival, and if the first year is an indication, this is going to be one of the best-run music festivals in the country. Four stages with alternating music from noon until midnight. Two stages were normally going at the same time, so you had plenty of time to walk around and see everyone that was playing all day. Every single band took the stage exactly on time – and finished exactly on time.

That is except for John Mayer. He was supposed to take the main stage at 4:45 and finish at 6:15. He took the stage around 4:20 or so and finished at about 5:40 or so. Since everyone else was exactly on time, the crowd was a bit confused. He came back out after about 5 minutes and apologized profusely, and profanely, which I liked. Something along the lines of; “Well fuck. This is the first festival I’ve played. When the last band finished, I thought I was supposed to start playing. Guess I fucked that up. So, we played all the stuff we’d planned on playing today – hope ya’ll don’t mind if we just jam a little.” Then he played for another half hour – covering Van Halen songs, Jimmy Hendrix stuff, and a few of his own he hadn’t played originally. I’ve gotta say, he really moved up in my eyes after his performance.

In short, it was a really, really well run festival. Great food. Lots of beer stands. Not enough shade (it was 100 degrees on Sunday), but they couldn’t do too much about that. They did set up some big tents, but could have used a couple more. Great acts – John Mayer, O.A.R., Steve Winwood, Tom Petty, Dave Mathews, and many more. Well worth the price of admission.

So back to The Police concert at Red Rocks. It was on the Monday after the weekend music festival in Denver. I’d checked on getting a ticket before I drove out there through a local ticket broker, but on the drive Friday, the broker called me and told me that they were out of tickets. He said he was confident that he was going to be able to buy some more over the weekend and that he’d call me in the next day or two with an update. When he called back Sunday, he asked me again how many tickets I needed. I told him that I was a single. He said, “Great! I’ve got a front row ticket that I can’t get rid of because it’s a single. Face value good for you?” Uhhhhhh. . . yes.

Because of its age and the way things are set up, Red Rocks is a bit unique right up at the stage area. The stage is basically at floor level and there isn’t anything, aside from a single barred fence, keeping you from jumping right up on stage. Because of that, they place 5-6 security guards in seats, right up next to the stage, looking back towards the crowd, ergo the difference regarding the wacky weed that I noticed.

While my previous concert lead me to believe that it was cool to smoke weed at any Red Rocks concert, once I got down to the front row, I realized that impression needed a caveat: you apparently can smoke weed anywhere in the Red Rocks crowd except in the first 4-5 rows. Those security guards must have rushed up into the crowd to grab joints and pipes about a dozen times during the show. It was pretty assuming.

They obviously weren’t going into the crowd to stop people from taking pictures.

Other notes of interest. A woman in the 2nd row brought a pair of binoculars to look at Sting for a good portion of the show. I didn’t want to know on what she was focusing. The front row was also partly reserved for people in wheelchairs. It was really nice to see those folks pop wheelies and spin around in a wheelchair effort to dance with the music. Uplifting.

Go see a show at Red Rocks. You won’t regret it.