I believe there are small happenings in all of our lives that make us reflect on larger topics in deep and profound ways. Some merely bring old memories to life, while others make you contemplate your future.

One day you drive by an apartment complex, have a flashback about your college years and then the friendships and experiences you had there wash over you like an incoming wave. Or you hear a song on the radio and immediately find yourself laughing out loud while remembering a crazy friend that loved that band. Someone mentioning how much they hate their job over drinks after work hits you as a hammer of realization that you are also dissatisfied in yours and you resolve to start exploring other options, although the thought had before never crystallized itself clearly. Every time I hear Tom Cochraine’s song “Life is a Highway,” I think of a spontaneous weekend trip I took to Ocean City, Maryland, when I lived in D.C. Some cover band played that song a couple times that weekend in a bar, as I chased around the woman that invited me on the weekend with her friends. Can’t remember anything about her – but can remember that song.

When I hear Kansas, I think of my high school friend, Cullum Clark, who was obsessed with that band back then. I wonder what music he is into now. The Cars equals Tad Fordyce. Oingo Bongo equals John Lynch. Ah ha (I’m not going to look up the spelling, because its embarrassing that I acknowledge having listened to them) equals Diane. And Nora Jones is the incredibly fond memory of a jewelry box, tickets, and a surprise phone call from Memphis. Twice.

And so on. I have a very crowded skull.

My father took my brother and I on a golfing trip this summer to Ireland. Just the boys. As my mother would put it, a good bonding experience. We rented a large mini-bus to tote around our golf clubs, luggage and the three of us. The roads in Europe are quite narrow and tough to navigate and the size of this vehicle didn’t make that any easier. 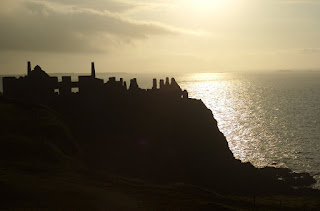 Dad took the first driving shift, from the Dublin airport up to Northern Ireland, which is where we were headed for our 1st round of golf that afternoon. Not great planning. We were scheduled to fly overnight to Europe, get in a van, drive three hours to Northern Ireland, check into the hotel, and play 18 holes. All of that fully jet-lagged. Day one on a European trip really shouldn’t involve anything that involves your mind, and even less, anything that requires some sort of physical coordination. I was up for a little sightseeing, a couple meals, some afternoon caffeine to stay awake as long as I could, then time at a classic Irish pub and an early night to bed. No such luck.

So we started driving up to Northern Ireland, on the left side of the road, of course. It started to rain lightly. We were on a major divided highway until we get close to Belfast, then we had to take regular roads through various towns, with frequent roundabouts interspersed every couple of miles. I’m actually a big fan of them, as they seem to make traffic flow much faster and easier than stop signs and stoplights, but the problem is navigation.

A typical roundabout is not like a four-way stop in the States. There are usually four, five or six different turnoffs you can take. The signs have combinations of road numbers (route A6) and lists of towns that you’ll get to if you take that road (Aberdeen/Killarny/Greenville). There isn’t a lot of consistency from roundabout to roundabout what sort of signs you are going to see, which obviously leads to more navigation problems.

Long ago, my parents lived in London for about six months. Between that experience and an earlier golf trip to Scotland a few years back, my brother and I figured that my father could handle the particular difficulties of driving in Great Britain. We were wrong. 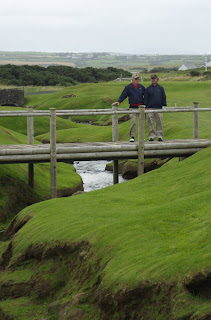 got from the company that booked our trip were wonderful. They were the sort of turn-by-turn directions you rarely get traveling abroad and they should have been easy to follow. As we came up on a roundabout, I’d tell my father “we need to take the 3rd turn towards Aberdeen. It might be labeled A5 also.”

We finally got to the town where we were supposed to stay for the first three or four days of the trip and tried to find the hotel. The directions were not as precise in the town as on the road getting there, but since it was such a small town, I didn’t think we’d have too much trouble finding the hotel. Almost every road was one way. We whipped around the city a couple times and couldn’t find it.

Not only couldn’t we find the hotel, my father was having a tough time keeping up with the traffic (and this wasn’t Cairo traffic) – he almost turned down the wrong way on a couple one way streets and seemed to be having trouble remembering which way he had already been before as we circled around. As his anger mounted, we decided to just go to the golf course, play, and get specific directions from the there back to the hotel.

The course was beautiful. It was perched on a hill overlooking the North Sea. But we were dead-tired and on about the 5th hole the rain started coming down harder. We decided to call it a day after nine holes and go check into the hotel. We got good directions, got back, checked in, ate dinner and got a good nights sleep. 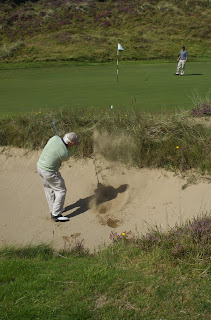 se booked for us and my father wanted to drive again. I’d written off his driving problems the day before on the effects of jet lag on all of us. I was wrong. We were in a more rural part of the country, but the same problems reoccurred again and again – difficulties on the roundabouts, troubles merging in and out of traffic, and the inability to follow my navigation instructions.

When we got the course, I turned to my brother and said, “I think I need to drive from here on out.” He nodded in somber agreement.

Right then, I had one of those moments. My father was old. It hit me hard.

I need to back up and tell you, my father was a kick-ass driver. Of his many talents, driving was one of the first ones I remember as I was growing up. He was a native Chicagoan and he could drive in any type of conditions. I vividly remember going to Dallas Maverick basketball games when I was in my early teens with him and him exiting off the highway onto the access road, looking to his right past all the traffic for the game clogging up the road and saying, “we need to get over these four lanes of traffic before that stoplight up there” with a gleam in his eye as he relished the challenge.

That stoplight only looked like it was about 100 yards away and there wasn’t anyone wanting to let you in front of them. And he made it. Easily. The guy could drive. And he loved doing it. It was just another way to compete against the world – and he was a winner.

Now he couldn’t compete in this arena, at least not nearly as well as he used to be able to. The only legitimate explanation was that he was getting old, but I’d never thought of my father as old. I’d made the obligatory jokes with him about his age for years. I’d been calling him “old man” for a decade, but I really never thought of him as truly old before this moment. 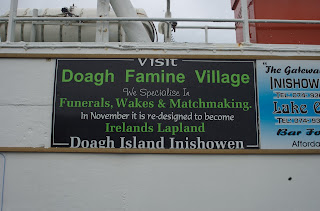 they could have thrown a wake... and found me a wife

It was the first time that I really thought about him dying. Happens to all of us, of course, but I think that those of us that were raised by fathers that we admire, subconsciously look at them as almost immortal.

That myth was shattered in my mind on those roads in Ireland, and as must flow from that, I began thinking about my own mortality as a result.

One of the many differences between golf on the British Isles and back in the State is the lack of golf carts over there. You either have a caddy or you sling the bag over your shoulder. Either way you are walking mostly alone for three hours. There is plenty of time to think as you walk and play for those three hours. We had ten days of golf yet to go. And I knew what I was going to be dwelling on for a lot of that time.

I need to do something to make him proud of me before his time comes.

16 thoughts on “Golf Trip in Ireland”