In the course of my adult life, I’ve driven around most of the United States. In fact, I’ve driven through 45 of the lower 48 states – missing Vermont, North Dakota, and Arizona. How the hell I’ve missed Arizona is beyond me.

The U.S. is incredibly beautiful. I love almost all of it, from the beaches and keys in Florida, up the Carolina lowlands, through Appalachia, the big cities on the eastern coast, the shorelines of Maine, the heartland (and yes, I also love driving through Kansas and Iowa and their flat farm fields stretching as far as the eye can see), the Black Hills and the Badlands, the Rockies, the Pacific Northwest, Highway 1 all the way down the Pacific coast, California, the inland deserts, the colors of southeast Utah. Almost all of it is incredible in my book.

West Texas and Oklahoma being notable exceptions. I thought I had seen most combinations of natural scenery before my trip.


But one thing I was unprepared for on this trip was the scenery in vast stretches of Peru and Chile – huge deserts that run right up to the ocean. In the States, almost all of the land that I’ve been in bordering both oceans is green and alive. Being from where I am, it just seems natural – up against large bodies of water, there is going to be lots of rainfall and lots of life.

That isn’t the case for massive portions of the western side of South America. Hour after hour our bus ate up the miles from the Ecuador/Peru border down to Lima. And there wasn’t a bit of life to be seen. Ocean on the right. Desolation on the left. It was like the beach started where you would expect it to, but then just kept on going inland. As far as the eye could see.

The bus would stop every six to eight hours to allow us to get off, stretch out a bit and get some food from little way stations on the road. It was so odd to me that you could smell the water – that unmistakable scent of the ocean – but at the same time you could smell the life that water represents, there was no life around you.

It felt so alien.

The same was true in northern Chile. Four. Six. Ten. Twelve hours went by as the bus drove down the straight-as-a-string highway. In the morning, the bus attendant closed the shades on the left side of the bus, facing east, to shade us from the sun. After noon, he opened the left and closed the right. And hour after hour after hour, all you could see was desert and ocean.

The Atacama desert in Peru is one of the driest in the world. The annual rainfall averages 1 millimeter. There is evidence to suggest there was absolutely no rainfall from 1570 to 1971. That’s over four centuries. Wowser.

The photos from Patagonia are awesome also.

Southern Argentina, Patagonia, was similar near the coast, but the distinction is that some life does exist. From Rio Gallegos south to Tierra del Fuego, about 1,000 kilometers, I looked out the window and just saw rolling hills covered with closely clumped tuffs of 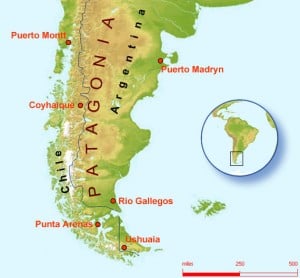 grass, none of which appeared to be more than about six to eight inches high. The color of everything out the window was between yellow and light brown, except for the occasional gray bush, some of which had a few green leaves. Hours would go by without a glimpse of a single tree.

It was barren, but not lifeless. Looking out the window, there wasn’t the mild feeling of despair that I got in the deserts on the western side – a feeling that I suppose arose from just the complete lack of anything that would indicate life was possible there. Here, you would occasionally see llamas grazing in the fields. I saw my first wild foxes running free just after making a stop at an immigration checkpoint. And the color was different – though not green, it still had the feeling of life in it.

I sat for a long time trying to think of what sort of terrain it reminded me of. It sort of reminded me of what I remember of South Dakota, but I’m sure that most of the land I saw up there was more cultivated than this. This land was 100% wild.

Eventually, the bus got to the Straights of Magellan and we had to take a ferry to cross into Tierra del Fuego (which is an island, unbeknownst to me before this trip). As the bus pulled to a stop, waiting on the ferry, I got out of the bus to walk around, with “Crisis? What Crisis?” playing on my iPod. (Because if you have been a avid reader, you know that music plays an important part in my memory.)

The wind was howling. As the ferry approached, you could see it fighting the fast current. The straights narrowed in this area and the water was visibly rushing towards the Atlantic. Although it was completely desolate, the cool temperature convinced me that I wasn’t taking a ferry across the River Styx.

It truly did feel like we were taking the ferry to the end of the world – Fin de Munde. Tierra del Fuego – the land of fire.

As the bus kept going south, we eventually starting going through some mountains, where there were lakes and trees and more signs of life.

I love trees. And water.