Perhaps the mental hangover from playing poorly in a poker tourny has slowed down my blogging. Don’t know why, but here are some notes on Uruguay.

I took the ferry from Buenos Aires over to Montevideo and then hopped on a bus for the two hour trip to Punta del Esta. Punta del Esta is referred to as Buenos Aires’ beach suburb. Its thought of as sort of the French Rivera of South America.

And its a pretty nice place, all in all. Certainly one of the more upscale places I’ve visited in South America. For example, all of the taxis are beige E Class Mercedes and the drivers wear suits — and also charge a heck of a lot more than anywhere else down here I’ve been to yet. The stores in town are have designer labels that even I can recognize. . .with the accompanying high prices. The beaches surround the town and extend up the coast both ways from town. The town itself is on a peninsula and no matter where you are in town, you are no more than 3 blocks away from a beach. I can see why its a popular spot with the well-to-do in South America. 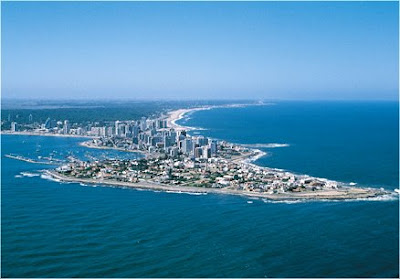 The less said about the poker tourny the better. It was a good event. I played very well for about eight hours, building my chip stack from the initial 10,000 chips to about 48,000 or so. There were about 200 entries into the event and with about 60 people to go, I had one of my typical blow-ups. The person to my right was a newer player that had recently been brought to our table. He made a raise in the cut-off position and I called his raise from the button. Both blinds folded. The flop came down K-4-6 with three different suits. He made a small bet, I made a complete and total bluff raise (I had 9-10 suited). He called my raise. I should have clearly realized at the point that I was totally lost and he wasn´t going anywhere. I didn´t and then bluffed again on the turn and the river, losing about 3/4s of my chips on a stupid naked bluff. I was out about a half-hour later in 60th place or so. O well. I should have learned that particular lesson long ago, but I guess relearning it will be good for me, eventually.

After getting knocked out, I wandered around upstairs looking for a live poker game. Problem is — no one plays live, cash game poker at these things. After they get knocked out, all the kids huddle up in the lobby, pull out their laptops and proceed to play 4-6 tables of online poker. The only live poker they play is in the tournament. I did manage to run into two really cool women from NYC that were in town for a couple days, Erika and Lauren. Both were high-ups at competing fashion magazines. I got a good craps lesson from the guy that was flirting with Lauren and got the low-down on how the magazine world works at the same time from Erika. And lost a couple hundred playing craps in the meantime. . .

Other thoughts about Uruguay. I haven´t seen a place with this many bookstores in a long, long time. Just wandering around Montevideo, the capital, I´d bet that I saw 20-25 bookstores and even more small magazine stalls on the streets. Of course, I had to feed my book addiction. And feeding that beast in Latin America is damn expensive. They apparently love their books here — and show it in the prices.

PDAs — public displays of affection. This is also apparently the norm in Buenos Aires and Montevideo. I couldn´t count how many couples I saw in full make out sessions in the plazas and just stopped on the sidewalks. Friendly and affectionate people, by the looks of it.

Montevideo is also a town on a peninsula, sticking out into the ocean. There are about a million people that live here, but you´d never be able to tell on a weekend. The town basically shuts down for Saturday and Sunday. You can find some places to eat and drink, but that is about all that is open downtown. Its like a ghost town on the weekend – nothing open and no one, I mean no one, on the streets. Eerie a bit actually. The town itself is pretty cool and laid back. Lots of fully grown trees planted everywhere in cut-outs from the sidewalks, which is a great thing in an urban setting. Mostly 2-3 story residental buildings all over the place. In that regard, it reminded me a good bit of Washington D.C., except with a more European flavor of architecture. I really love the rounded corners on the buildings here and in Buenos Aires.

Lastly, matte tea. I haven´t tried it yet, because the reviews I´ve even got from the locals that drink it hasn´t been that favorable. I suppose I should try it in the next couple of days though. They fill up these cups (below) with the crushed matte tea leaves. And by fill it up, I mean fill it up. The entire cup is totally full of leaves. Then they pour in some hot water (you see hundreds of people carrying these cups and a thermos of hot water everywhere walking the streets), mix it up with a special spoon that also functions as a straw and drink it through the spoon. Seeing everyone walk around with these a cup and a thermos is an interesting sight. 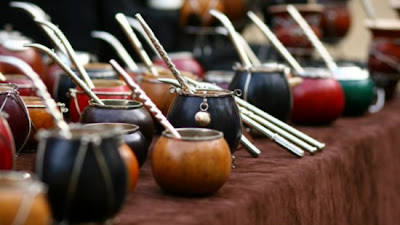 A walk through La Recoleta Cemetery in Buenos Aires

4 thoughts on “Uruguay Thoughts and Images”