I have kept a Mexico City roadmap in my backpack for all these months, because I was fascinated by the street names.

Most Latin American cities have a variety of streets named after important dates (assumably) in that country’s history. The Centro Historico district of Mexico City is no different: 5 de Mayo (even I got the significance of that one – though I still associate it 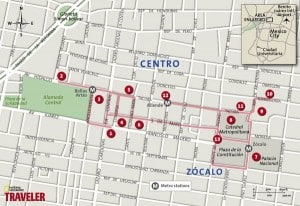 more with a Corona commercial than its true meaning) and 16 de Semtiebre roads. A variety of roads named after other countries in Latin America: Republica de Uruguay, Republica de El Salvador, Republica de Brasil, Republica de Cuba (the Republic part would be news to most Cubans), Republica de Colombia, and so on. I didn’t notice a Republica de Estados Unidos, but since we had taken about a third of Mexico from them a couple hundred years ago, that didn’t exactly surprise me.

It was the other districts of town that I really found interesting.

The Cuauhtemoc district had all its streets named after international cities: Londres, Liverpool, Tokyo, Genoa, Oslo, Copenhagen, Roma. Once again, no streets named after American cities. Hmmmmm. Liverpool and Hamburg get streets named after them (and pretty big ones in fact), but no Nuevo York or Chicago street?? I could understand why no Los Angeles avenue – we did sorta take California from them – but what about some cities east of the Mississippi?

Right across the Paseo de la Reforma was the Cuauhtemoc district with streets all named after rivers: Rio Nilo, Rio Po, Rio Tigris, Rio Elba, Rio Amazonas, Rio Sena, and . . . Rio Hudson. True, it was only one block long – wedged between Rio Panuco and Rio Lerma – but we made the map!!

The Polanco district was my favorite, all named after famous authors west of the Parque Lincoln (I feel pretty sure that was named after Abe) and famous philosophers 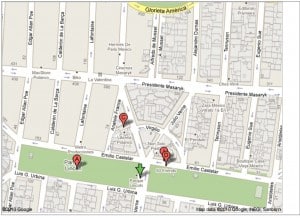 and scientists east of that. To the west: Dickens, Moliere, Ibsen, Tennyson, Oscar Wilde, Julio Verne, Alejandro Dumas and Edgar Allen Poe. To the east: Galileo, Aristoteles, Hegel, Newton, Schiller. There did seem to be a bit of confusion on a street here and there in this district: Platon and Socrates streets were to the west and Hans Christian Andersen and Homer were to the east.

The driving was completely and totally insane in Mexico City, but I do have a soft spot for any city where I can get in a cab and say: “take me to Florence and London please – right on the corner will be fine.” Or perhaps “to the bookstore right there at Aristotle and Homer.”

One of my Mexico regrets on this particular trip was not spending enough time on the Mexican coasts… I will have to come back again soon.