So the dinner tab last night for the remaining 10 people on the eight day safari I just finished was $862,000. Almost thought it was going to be the first million dinner tab that I was ever involved in.

What is also interesting here is that just about every place takes a variety of different currencies in payment. You can pay your bill in South African rands (600 to 1), Botswana pula (700 to 1), US dollars, or Euros (6,500 to 1), or of course, kwachas. Or any combination thereof, which lead to an interesting bill payment last night.

Everyone took a look at the bill and got an idea of what they owed. I usually hate dealing with bills this way — I’d much prefer everyone just paying 1/10th of the bill in this case — but whatever. And then everyone starting throwing money into the pile, which I was assigned to sort out. Not sure why I was the choice — I went to law school partly because I can’t do math. 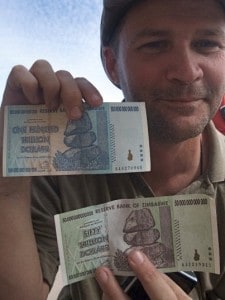 Into the pile went 200 South African rand, 27,000 kwachas, and $55 U.S. dollars. The last three people needed to pay their portions on a credit card. I did the math a few times and came up with about 442,000 kwatcha that we had in cash and the credit card payments made up the balance nicely. Of course this all took about a half hour to sort out.

It was compounded by Wulf, a 71 year old German on the trip (much more on him in a longer safari blog soon) insisting that his bill was 135 South African rand. He only had two 100-rand notes. The restuarant couldn’t make change for him in rand and he militantly refused to take back kwatcha in change. None of the other people in our group could change one of his notes in rand either. I eventually talked him into putting one of his 100 rand notes in the till and pretending that someone else lent him the balance — because he wouldn’t just let us cover the 35 rand difference. “That is RIDICULOUS!! I owe 135 rand and will pay my bill!!”

Gotta go — this stop at the internet cafe is going to cost me tens of thousands. . .

The Dangling Conversation with the @Everywhereist