Stone town is the old center of Zanzibar Town, on Zanzibar Island, which is offshore of Tanzania. It is an UNESCO World Heritage Site and quite and interesting place. 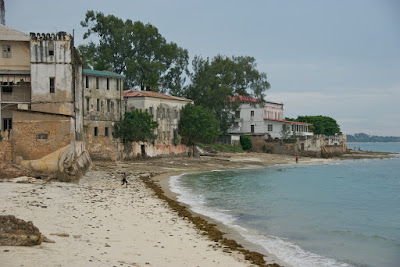 From Stone Town
Stone Town is an usual place. It reminds me a bit of Venice, obviously without the canals. The streets are incredibly narrow. Unlike Venice, there is some traffic on the streets — cars on the 3-4 streets big enough to handle them and scooters and bikes on the small ones. But its the same feel of a town almost randomly constructed. There is no method to which way the streets run. And around every corner, you never know what you will run into. Its quite small though and like Venice, getting lost in Stone Town is much of the fun.

And the doors! Wow. For any door fans out there, like my sister. . . 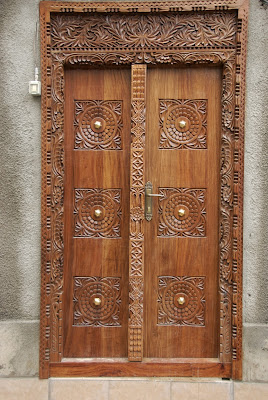 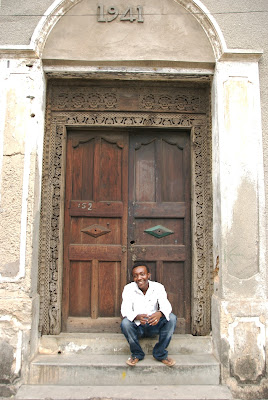 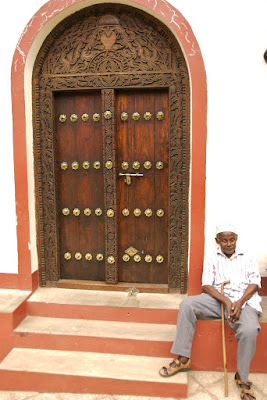 From Stone Town
The one thing that the guidebooks warn you about Zanzibar (and Dar es Saleem, the big port city on mainland Tanzania that you go to to get here) is about the scams and touts everywhere. On Zanzibar, they are called papasi, which means ticks in Swahili. They literally swarm you went you get off the ferry.

But before I fill you in on that, let me tell you about buying our ferry tickets. Aileen, Sonny and I got into Dar es Saleem around 3:45 p.m. on the two day train from Zambia. Earlier on the train, a Dutch girl named Evelynn had warned us about buying ferry tickets, saying that she got ripped off by getting directed to a fake ticket office. A couple guys came onto the train at the Dar es Saleem station, as we were getting out stuff out of our cabin, and offered their services for a cab ride. I’m normally not into giving the business to the guys that actively chase you down for it, but the last ferry was scheduled to leave at 4 p.m., so we needed a ride fast. They offered to take us to the ferry for $10,000 Tanzanian shillings (about $8). I got them down to $6,000 and we had a deal.

The two guys led us out of the station and into their van. Two more guys were in the van, the driver and an older guy dressed as a Muslim in the front passenger seat. Apparently, he was the designated nice guy. He told us we’d never make the ferry in time, but we could go there, buy our ferry ticket for the next morning and then choose a hotel to spend the night. One of the two guys back with us immediately showed us a brochure for a hotel he recommended.

As we drove through town to the ferry location, the old guy and another one of our escorts (a total of four of them and three of us), was repeating the advice that Evelynn gave us on the train. Lots of scam artists around. Got to be careful about buying your ticket. Aileen in the meantime had pulled out her Lonely Planet Tanzania guide to look up the reputable names of ferry operators and also a hostel for us — since it was obvious we weren’t going to make the 4 p.m. ferry at this point.

We got to the ferry area. The two guys that got us on the train hopped out and told us to follow them to the ticket seller. Sonny and I went with them and left Aileen to guard the luggage (yes, not very gentlemanly of us, but we weren’t thinking quickly enough). The guys took us into a small office. A guy was behind a crappy desk. Probably a 8 foot by 6 foot room. Nothing on the walls. No computer. No brochures or anything.

Clearly a scam operation. The two guys told us to buy the tickets from the guy at the desk. I said, “this doesn’t look like the office.” The guys with us pointed to a door in the back and said, “the manager is back there, this is just the front office.” The guy behind the desk said “what’s the problem?” in a surly manner.

No problem — we left immediately. The two guys were trailing us asking what was wrong. I headed for a place with the sign of the company that Aileen had found in the book. We bought the tickets there — from a couple people that barely wanted to sell them to us. . . which is a good indication that its the real office.

Then we got back into the cab. Aileen asked what was up, since she saw us exit the one place and walk quickly to the other place. I told her that we’d fill her in later. She told the driver the name of a hostel to go to. On the way, the two guys hopped out of the van at a stoplight and left us with the driver and the old guy. When we got to the destination, the driver tried to scam us into paying $15,000, though we’d agreed on $6,000 to the ferry stop and the hostel wasn’t that much further. We were smart enough to not even talk money until we all had out luggage safely out of the van (never leave your luggage somewhere that it can be held hostage) at this point. I explained that the two guys that drummed up the business told us $6,000 to the ferry. I told him, as I handed the bills to him and walked away, that $10,000 was all he was going to get.

Aileen only wanted to give them $8,000. Tough girl, as almost every single female traveller I have run into is. No way I’m negotating against her in the future.

All in all, not a big deal. The next morning we caught the ferry, got off in Zanzibar, and went through Zanzibar immigration (oddly, they seem to think they are a seperate country — though they are part of Tanzania. As soon as we exited the ferry stop, about eight of the papasi came up to us and offered to show us to hostels. They literally just swarm all over you. We politely told then we were fine and that we knew where we were going and they just wouldn’t stop offering us direction — “no, turn this way for Jambo Hostel.” We just kept walking. . .and getting lost of course. Every time we stopped to look at the map, they would re-swarm. At one point, we thought we were down to about two of them, but when we stopped, six or seven immediately showed up. Annoying, but not physically threatening in any way.

Which leads me to another comment on Zanzibar. These guys are all over the place, trying to sell you stuff everywhere or offer you guided tours of this and that. Really annoying. But on the other hand, I’ve not felt this safe in many towns before. Everyone says this place is safe and I agree 100% with them. I’ve walked around with my laptop under my arm for a couple days and never felt threatened at all. Walking around at night is totally fine also. 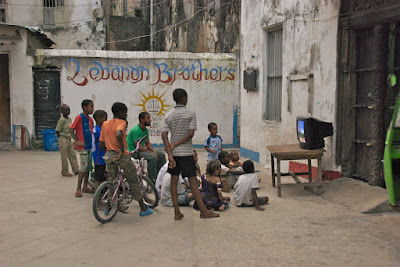 The place is full of contradictions. Partly a Muslim town — there are some fun places to get a drink here, but at the same time, only about one in four places serve alcohol. Annoying touts everywhere, but completely safe place. Part of Tanzania, but they think they are independent. And so on.