My cargo freighter arrived in Brisbane, Australia on the morning of December 13th. I found my way into town and got a room at a local hostel. The owners were reported to be very helpful about travel plans, which was important to me, since I had no idea how I was going to spend my next couple weeks. I had a last-minute harebrained thought (par for the course for me) to rent a car and drive to Alice Springs to go see Ayers Rock/Uluru.

There were a couple factors running around in my head. I hadn’t driven on this trip, except for one day in Capetown. I am am American, which means I am addicted to driving — and in my case, it is really true — I love driving. I wanted the freedom of being able to pull off the road whenever I wanted. And I wanted to see some of the Australian interior, which even most of my new Australian friends haven’t done.

I asked the two owners of the hostel, Wendy and Chris, about renting a car and whether it would be possible to get from Brisbane to Ayers Rock by the next evening, my 42th birthday for an Australian road trip. They said they thought it was about 2,000 kilometers and they would check on rental car prices for me while I pulled some stuff up on the internet about other options and made my decision. 2,000 kilometers is about 1,200 miles. That’s a pretty easy two day drive in my book. Assuming I could get an early start on the 14th, sunset at Ayers Rock/Uluru might even be possible. Sign me up.

Chris told me that they couldn’t get a hold of their friend with the good rental car deals until the next morning. They also pulled up the map to Alice Springs (the nearest town to Uluru) and it showed a distance of 2,500. Still feasibly doable in two days, but making sunset at Uluru didn’t seem likely. As I went to bed on the 13th, in my head, I’d decided that if the rental fee was $50 or less per day, I’d go for it. 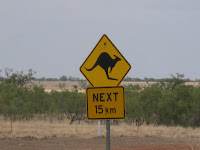 The next morning, I was told the rental fee for unlimited mileage was $54 per day. That included $18 per day for insurance. Now, I hate insurance. Rental car insurance is a horrible, horrible scam. One of the worst value things you can ever buy (right up there with extended warranties).

Plus, I’m incredibly lucky. I was going to have the car for about 10 days and not getting the insurance would save me almost $200, which is real money for sure. I asked them if the drivers in Australia were bad enough where I should worry about insurance and they both said, “it’s not the other drivers, it’s the kangaroos.”

Apparently, there are kangaroos everywhere in the hinterlands and they regularly just jump across the roads and run into cars. Chris said that he has run into one before, but only one. He said it was a real risk though. He also pointed out that if a rock chipped the windshield, the insurance would pay for itself. If I paid the $200 for the insurance, the maximum I would be out in case of an accident would be the $330 deductible. If i didn’t get the insurance, I would be maxed out at $3,000 in case of an accident.

I decided to get the insurance. Good idea. 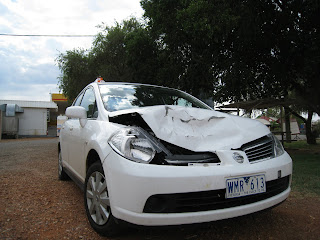 glad I ended up getting that insurance….

Basically, I have no idea how people do NOT hit kangaroos, at least on the roads that I was on. I must have seen 200 of them in a stretch of a hundred kilometers at one point. They just sit on the side of the road. You have no idea when they will hop across the road. They are incredibly erratic and you cannot predict what direction they are going. Hell, I was lucky to hit only one of them, but it was a big one.

Vital tip. You simply cannot drive at night. During the day I haven’t seen as many of them as the one night I drove (and hit one). For what it’s worth, I haven’t seen too many of them in the far interior, but they seem to roam in packs and I bet I just haven’t run across any big packs in the last couple days. There have been at least 300 ‘roo carcasses I have seen on the road in three days. It is amazing.

As a friend put it, the question sometimes is merely, what do you do when things go wrong?  And on the road, you better be ready for lots of those moments.  Made me wonder why I didn’t stay on the east coast of Australia a bit longer! 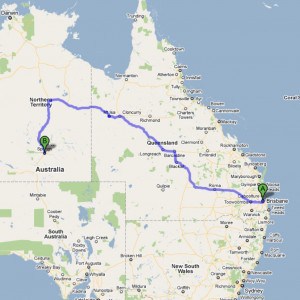 looks so close on a map

As to the trip, it was a hell of a lot longer than 2,500 kilometers. Turns out that route was about 1,000 kilometers of non-sealed (meaning dirt or gravel) road. I didn’t figure that out until I was about to turn down that way and looked at an atlas during a gas station stop. So I stayed on the main sealed road route and the total mileage is going to end up being about 3,500 kilometers each way from Brisbane to Uluru. I am writing this from Alice Springs — it took me three full days of driving to get here. Uluru is about 450 more kilometers from here.

A friend of mine just recently wrote another post about hitting a kangaroo in Oz.  Seems common.

8 of the Best Australian National Parks