Pretty much every person back home that I know that has visited New Zealand thinks it is the best place on the planet, both because of how friendly the people are and the scenery. I haven’t been motivated enough to see enough of the scenery to make any sort of complete comparison of other places I have seen, but I have met enough Kiwis to say they may be the nicest people in the world. Because, let’s face it — there are some great people in the world and… not so great.

Before I got to New Zealand I sent out messages asking friends if they knew anyone that lived here. Between friends of friends and Kiwi’s I’ve met on the road, I had a nice base of people to give me advice about these two small islands. One thing that a number of them asked me if whether I was going to do any hitchhiking in New Zealand. I hadn’t really thought of it before then. In Africa, I had to do a little bit of it to get around some areas without public transport, but I’d figured I would just be taking trains and buses here.

The other thing they wanted to know was if I was going to do some camping in New Zealand, which I actually also got a bit of a chance to do, but not as much.

Once I got here, some other travelers I ran into in Napier also said it was the best place in the world to hitchhike.

So I did. When I went to buy a bus ticket from Napier to Martinsbourgh, the ticket lady told me the bus only went as close as Featherston, which is about 20 kilometers from Martinsbourgh. She said, “you won’t have a problem getting a ride from there.” OK, sounds good to me. 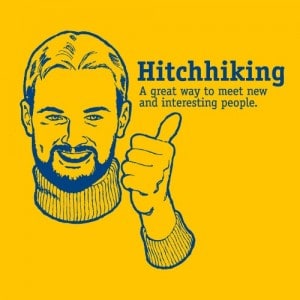 I took a couple buses down to the southern part of the North Island, at Featherston and got off in that small village. After taking a quick look around, I saw the road sign for the Martinsbourgh and started walking down the road. Sure enough, the third car that drove by stopped and picked me up for the 20-kilometer drive.

Shawn was a Kiwi from Wellington, which is the capital of New Zealand and is about an hour’s drive from where he picked me up. He was on his way to his new fiancée’s parents’ house for what was essentially and interview with them, as he put it. He had only been dating her for ten weeks and had proposed just a few days before. He was now on his way to meet her parents for the first time.

What amazed me what that he told me: “They are having a BBQ tonight. I’d just bring you on over, but it might not be the best night for that.” And he was dead serious about just bringing a total stranger that he met 3 minutes before over for dinner with his soon-to-be-in-laws, who he hadn’t met yet. Amazing Kiwi hospitality that I never would have got without hitchhiking in New Zealand.

Shawn dropped me off in the center of town and I wished him well in his interview. He gave me his email and told me to drop him and line so we could have a beer down the road. I then walked into the Martinsbourgh Hotel and asked them if they had a room available. The woman behind the desk looked at my backpack and me and said quite nicely: “We only have one room left tonight, but it is $200.” As she said this, she didn’t even wait for my reply but pulled out a local map and said “there are a couple other places in town that might be good for you” as she made a couple X marks on the map and told me the names of them.

As she is pointing out the two (cheaper) other places in town, a guy walks by and says, “hey Allie, why not just call the motel and see if they have a room. If not, I can drive him over to the place outside of town.” Yet another nice offer from a total stranger. She called the motel, which was close enough to walk to, and sure enough, they did have one room left for $65 a night.

When I got to the motel, I was met by the husband part of the husband and wife team that owned the place, Colin. He asked if I knew the deal for the room and I told him that I thought it was $65 a night. He said, “yea, usually, but the room is a bit small. How about $60. Does that sound OK?” Since I’d already said $65 was fine, I wasn’t going to argue with him bidding against himself.

I had a great couple days in Martinsborough. I rented a bike the next day and rode around to about 8-10 wineries on a beautiful, clear, sunny, 70-degree day. It was a Thursday and hardly anyone else was tasting. It was a really nice day.

When I left, I needed to hitchhike back to Featherston, where I was planning on catching the train to Wellington. This time it took me a lot longer to get a ride – almost fifteen minutes. Then Carl, Carol and Rob pulled over to pick me up. They asked where I was going to and I told them Featherston. They said they weren’t going that entire way – they were turning off about halfway there to head north – but asked if I wanted to get a ride with them until the turnoff. I hopped in, we set off, and Carl, the driver started asking me about my trip, how much cars cost in The United States, my trip and so forth. After a few minutes he said, “well, I guess we can just go to Featherston and take the roundabout, scenic route back home.”

Seriously, the friendliest people I’ve ever run into, I think.

For those that want to do some backpacking in New Zealand, make sure you check out my friend’s blog with tons and tons of other tips.

8 thoughts on “Hitchhiking in New Zealand”