A quick mini-post. I love movies. And for some movies, there is simply no better place to see a movie on the big screen – watching on a television, no matter how big is no substitute. Lawrence of Arabia. Blade Runner. Star Wars. Saving Private Ryan. And so on and so forth. Plus, just the event of sitting in a theatre is one that I really like.

I haven’t seen too many movies on this trip, which is one of the few things I miss. I saw Slumdog Millionaire in Santiago, Chile, which was interesting because it was in English with Spanish subtitles. Obviously that would normally be good for me, but if you saw Slumdog Millionaire, you might recall there was a good portion of the first half of the movie were the dialog was in Hindi (I think) and there were English subtitles. . . unless you saw it in Santiago, where the subtitles were in Spanish. Made for interesting guesswork on my behalf.

I saw Avatar in Alice Springs, Australia before camping out in the Uluru area and it may be, in my opinion, the most overrated movie I have recall in my adult lifetime. The script seemed to be written by a college freshman as part of a Intro to Movies 101 class. Horrible. The special effects were wonderful, but ask yourself this, was there a single character that you will remember in ten years (or ten months for that matter). Any Han Solo? And Chewbacca? Hell, not even a R2D2.

Sitting here as you read this, do you recall any of the characters names without googling it? No doubt the 3D special effects are cutting edge, but they won’t be in just a small bit of time. If that movie wins the Best Movie Oscar. . . worst Best Movie winner of all-time. In a decade, it won’t even be a debate. People will laugh at how stupid the voters were.

And there endith the rant and my effort of having a short and easily readable blog. On to the two movie experiences I had in New Zealand. I was bored one afternoon in Nelson and decided to go see It’s Complicated. The movie was fine – typical stuff from Nancy Meyers. Some reviewer called her movies “kitchen porn” and that seems about right. What I found fascinating was that it was the first time I’d ever had assigned seating in a movie theatre. When I bought my ticket, the clerk pulled out a seating chart and had me pick out my seat. E-1. Not a big deal, but just thought it interesting that first time I had an assigned seat was in the small town of Nelson, New Zealand.

Yesterday, I went to see The Imaginarium of Doctor Parnassus. Perhaps the worst title ever for marketing. Even if you loved it, you aren’t going to remember the name. It is a Terry Gilliam movie and he makes some wild and weird stuff (Brazil is a true classic). This movie is a bit famous, because it was Heath Ledger’s last movie, before his untimely and early death. Speaking of him, check out many movies he made before he died. Heath Ledger’s Movie List. I had no idea until I looked. He was a really talented actor, in my opinion, and was quite good in this movie. He died in the middle of filming and 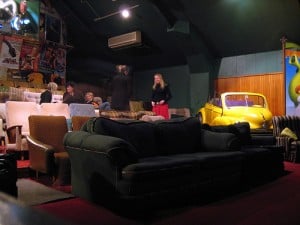 the method (and other surprise actors) that Gilliam covered for his loss is perhaps the best part of the entire movie.

What I liked about the experience was the theatre: Paradiso Cinema/Café/Bar. Ripped off name, but great little place. The seats in the theatre are big couches, overstuffed chairs, bean bags, and even a small car, with the top sawed off. You can order beer and wine and bring it on it with you and the same for full meals from the attached kitchen. Really nice concept.