Most of the long-term travelers that I have met have some variation of the “it’s a small world” story that runs in a similar fashion – I ran into so and so a number of countries and weeks after I saw them last time. No matter how many times I have heard variations of this fairly common story, it never ceases to totally amaze me when it happens to me, as it has three times on my trip.

You have already heard the first time this happened to me on my post about the people I met on the cargo freighters. I took a freighter from Brasil to South Africa with a few people, including Ian. Our ship got to Cape Town in early April. I then went overland, basically up East Africa, from there, until I got to Addis Ababa, Ethiopia, around the end of June. Four months and 3,500 miles later. There, in a hotel bar one afternoon, in walked Ian, out of the blue.

The second time was a lot less awe-inspiring. I hung out with a Brit named Stephen for two or three days in Hanoi, Vietnam, when I arrived there. Nice guy, we had some beers, talked about football (international style), and compared notes on what we were thinking about doing in Southeast Asia. The then took off to go to southern Vietnam and over to Camb 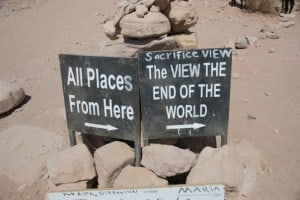 odia. I went a little further south, then turned west to Laos, then down to Cambodia, then back to Thailand about six weeks later. I had a late-night train from Bangkok to northern Thailand and was killing a few hours in a pub before the train, actually watching some Premier League football, when Stephen walked in. We both had our backpacks with us – he was leaving in a few hours on a bus, going south.

The latest one happened just a couple days ago, here in New Zealand. In February of last year I meet three girls in Ecuador, two from the U.S. and Lily, from Canada. These were the three that I did the bridge jump with in Banos. Since then, I haven’t been in touch with her at all. She went back to Canada, worked, and a few months ago, decided she wanted to toss her life up in the air a bit and moved to New Zealand. This was all totally unknown to met.

So a couple days ago, I hitchhiked from Fox Glacier to a little lake town in the southern middle of New Zealand, Wanaka. A brother and sister from Oregon were nice enough to pick me up and bring me here. The brother had been traveling around New Zealand for a while and once we got here, he took us to a little local pub off the beaten track, with some cheap beer. 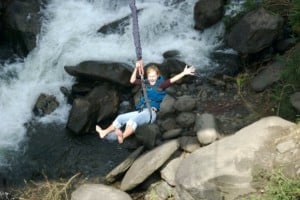 Lily, post-bridge jump when we met in Ecuador

We walked in around 8 p.m. and were the only three customers in there. As we went up to the bar and ordered, from the other side of the bar I heard a quite loud “Michael!” It turns out Lily had landed in Wanaka less than a week ago and just got a job at this bar three days before I walked in. One year later. Literally almost all the way around the world.

It truly is a small world. And we celebrated such a revelation by then going to another bar to torture innocent patrons with our versions of karaoke classics.

So here is what I’d really like to assemble some more of these stories here. If you’ve got a story, post it in the comments section. If you have written a blog post about one of these situations, please feel free to link it here. I love hearing these stories.

15 thoughts on “It IS a Small World After All”