Skip to content
Home » Blog » Craziest Person I Have Ever Met

The craziest person I have ever met was a German, claiming to be a doctor, that came in one evening to the bar I was drinking at in San Juan del Sur, Nicaragua. I’ve offended many different people before, so let me begin by saying I am not casting general aspersions on Germans, doctors, older men, people that go to bars, or expatriates. Now back to our originally scheduled programming.

Club Iganya is a beachside bar in this sleepy town, seemingly dominated by expatriates from Canada and the States. I’ve written about San Juan del Sur before and suffice it to say that it is has a very interesting collection of expats.

I walked in for my daily sunset drinks and as I walked by a table with two guys and girl, they asked me to sit down. One of the guys was a Canadian expat and the other was just a Canadian down on vacation. They were both a little off, which was something I was getting used to in this wonderful little odd town. Angela was a hippy lawyer from the States, graduate of Dartmouth, Brown and Yale, who was backpacking her way home through Central America after spending six months opening an English school in the Kasmir region of Pakistan.

The interesting mix got much more interesting as the two Canadians wandered off to go find dinner and this German guy, who appeared to be in his late 50s or early 60s, walked up and started talking to us.

He asked us where we were from. We told him and asked in return. “I live in a tree in Africa.” We chuckled. Not that funny, but I’ve heard worse. We assumed he was joking, so we asked him to tell us about his tree. He did. Without cracking a smile. We asked what he was doing here, if he lived in a tree in Africa. He said it wasn’t difficult to get back and forth. And we realized that we needed to try to find a way to end this conversation as quickly as possible.

Then he told us he was a doctor and was in San Juan del Sur to do some very secret and important research. We had to ask. He was here helping make experimental pills that would slow aging to a crawl, allowing you to live decades longer. The pill cost $10,000. He then said he had to go back to the tree for a bit, but he’d be back soon. We hoped not. 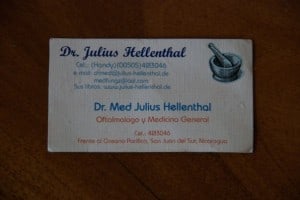 But alas, he was back in about 10 minutes. We asked how he got to his tree and back so fast, and he said he shouldn’t tell. I was certain we were soon to embark onto a conversation about time travel and/or Star Trek beaming technology. He then pulled out a business card and told Angela, who had encouraged him more than I had, that he’d write out the prescription for the secret pill.

If I hadn’t taken a picture of it, I really would have chalked up the whole experience to beer memory. 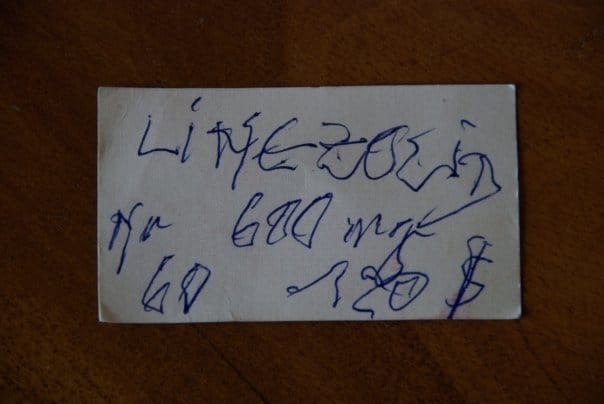 the magic cure for aging and all that ails you

25 thoughts on “Craziest Person I Have Ever Met”