Well, now that the sites for the 2018 and 2022 World Cup have been announced, it is important to get a guide published for one of the big questions that every British, German, Aussie….. well hell, almost every football/soccer fan is asking.

The Islamic religion forbids the consumption of alcohol.  How am I going to be able to get my drunk on at the 2022 World Cup in Qatar?

First, let me appear scholarly by stating that the Islamic prohibition on the consumption of alcohol comes from the Quran where, “intoxicants and games of chance” were called “abominations of Satan’s handiwork,” intended to turn people away from God and forget about prayer, and Muslims were ordered to abstain. [Quran 5:90-91] (Quotes from wikipedia) Well, not that scholarly, I guess, since I just looked it up on wikipedia, but whatever.

Back to the point — the Quran prohibits alcohol and gambling?  I’ve been to Vegas a few times and I’m not sure that the obscenely rich Muslims, especially the various princes from the region, got this memo.

Scrolling further down in the article it states: “However, there are no prohibitions on using alcohol for scientific, medical, industrial or automotive use…”  So I am thinking that if your side loses a match, you might be able to get an alcoholic drinking exemption to “medically” deal with your grief. 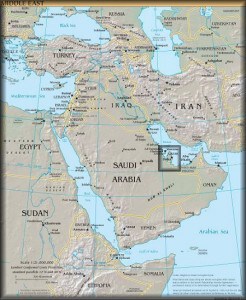 let’s be blunt, most of my readers are Americans and we aren’t great with geography

Aside from that slim possibility, let’s get specific about how to legally buy beer and liquor in Qatar.

Make no mistake, cold beer is going to be a necessity, not only for normal World Cup celebration purposes, but just to deal with the heat.  In addition to being the smallest country to ever host a World Cup, Qatar is going to the be the hottest.  The average summertime temperatures there are 95 degrees Fahrenheit (35 degrees Celsius) and the highs approach 108 degrees Fahrenheit (42 Celsuis).  I was in the Middle East in August of 2009.   It’s hot.  It’s Africa hot.

I am going to make more fun of how dumb it is to award the World Cup to a country this small in another post, but let’s get the good news about liquor out of the way first.

There is a place to buy liquor in Qatar.

The bad news?  There is exactly one liquor store in the country.  The good news?  Whoever owns it is going to set the Guinness World Record for “Most alcohol ever sold from one location in a month.”

The only liquor store in Qatar is called Qatar Distribution Centre, in Doha.  Luckily if you are going to the Cup, the location is convenient.  Qatar has exactly one international airport (that certainly won’t be a problem with the incoming spectators for the world’s largest sporting event) and it is in Doha, the capital.  So you can hop off the plane and head right for the liquor store.

Alas, there is a small catch to buying liquor at the one store in the entire country– you need a license to purchase anything.  “To purchase things there, you must have a license that can only be obtained by having a written letter of permission from your employer. You can only get a license when you have obtained your residency permit and you will need to get a letter from your employer confirming your salary in addition to paying a deposit for QR1000 (currently about $275 U.S.).” (from wikitravel on Qatar)

‘O yea, I forgot to mention that to buy beer and liquor at the store you have to have a resident visa there.  Meaning that tourists can’t buy anything.  Small hurdle.  Don’t worry about that deposit thing — you are going to want the booze enough to pay that if you can get over that tiny non-resident problem.

Here is a forum that I found talking about getting a liquor license in Qatar.  Some highlights, “you could be fined if you are caught transporting the alcohol any where other than straight from the liquor store to your home” and “they determine a monthly amount that you can spend at the store [based on your local income].”

Seriously… Qatar?!!  FIFA couldn’t have awarded the games to Burma?  They’ve got some problems, sure, but I think you can get a beer there without getting arrested.

I am willing to go a long way to get an alcoholic drink, but these hurdles…..

Another side note: public displays of affection between men and women are not only discouraged, but can be a punishable offense.  I didn’t see anything about same-sex affection, so you might be able to hug your friend after your team scores a goal…. if your friend is your gender.

As a bonus, it is illegal to bring any alcoholic beverages into Qatar, though when then confiscate it, they will give you a receipt to pick it up on your way out of the country.  So you got that going for ‘ya, which is nice. 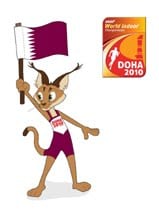 Saham, the cute mascot for those big indoor championships – INDOORS

From talking to friends that have lived and worked in Qatar, you can apparently buy drinks at the western hotels located there.  I am sure that those prices will be completely reasonable during your stay there for the World Cup.  Almost no chances those prices will be jacked through the roof.

As to whether Qatar will allow beer or alcohol sales at the actual event sites, I have not been able to find any information at this time, but Qatar has hosted huge sporting events before — they hosted the 2008 Asian Indoor Athletics Championships.

Special Note — there is no need to do a Drinking Guide to Russia for the 2018 World Cup.  At those venues the rules are simple.  Event organizers will be handing out vodka starting at 10 a.m. every morning and each and every person attending a game is required to get drunk by early afternoon, so they can more fully appreciate the essence of Russian culture.  On the other hand, smiling will be strictly prohibited and punishable with immediate deportation.

So, I think it is fairly safe to assume that these strict restrictions are going to be modified or lifted when the time comes for Qatar to host the World Cup.  They must have made some extensive promises to FIFA (aside from the requisite bribes) about a number of topics that will ensure that there is a good turnout for the games, including mundane ones, like non-Muslim fans having access to a pint.

Given the religious and political climate in the Middle East, I am also sure that there will be no imams, terrorist leaders or other opinion makers in the region that will stoke up anger and resentment towards the “Western imperialists that are defiling a Muslim country by forcing them to sell liquor — and also allowing infidels to get drunk and cause maheam in the holy lands of the Middle East.”

Yea, I’m buying my tickets immediately.  This is going to be a blast.  Literally.

In case you are planning to move there, so you can buy a beer to celebrate your team’s victories — here is the info on the Qatar Distribution Company:

Directions from the airport:

Drive along C-ring road from the airport. You will come to Ramada junction – traffic light signals with the Ramada hotel on your right. Turn left onto Salwa Road. Drive over the fly-over and along Salwa road. Eventually you will come to a roundabout with a sign pointing towards the wholesale markets.

Take the third exit off the roundabout. Drive along the road (whole market street), going straight ahead at the roundabout by the markets, for several kilometres. Eventually you will come to a building with black railings. Turn left straight after the railings, and just before the Qatar Technical College. Follow the road round and you will come to the Qatar Distribution Company.

5 destinations to see in the Middle East now