Take the pledge with me, please.

Too much, you say?  Do you remember a wonderful movie from the 80s called Broadcast News

? There was a great speech in it from Albert Brooks, when he tells Holly Hunter’s character that the simple minded William Hurt character is the Devil:

What do you think the Devil is going to look like if he’s around? Nobody is going to be taken in if he has a long, red, pointy tail. No. I’m semi-serious here. He will look attractive and he will be nice and helpful and he will get a job where he influences a great God-fearing nation and he will never do an evil thing… he will just bit by little bit lower standards where they are important. Just coax along flash over substance… Just a tiny bit. And he will talk about all of us really being salesmen.

Now that is some damn good writing.  And it is pretty much how I feel about Top 10 lists.

They are pablum.  They are the mindless dreck that comes from wanting to knock out a quick post…. wait… an idea forms….

Deal with the format, in its own format. Similar to my tongue-in-cheek 2010 year end wrap-up idea, true, but let’s roll with it.

I should do this with some cool video that would reveal them with the appropriate background music, but my technical skills to not rise to the level of my distain.  So instead, I’ll embed a appropriately reverential and respectful song (that features the mental state I feel every time I see these damn things) here via the above clip.  Please just hit play and scroll down slowly, pretending all is revealed in sync with the tune.

With no further ado, I give you…..

9. You didn’t think you were really going to get 10 reasons, did you?  Let’s start with some respect for worthwhile Top 10 lists, for instance the Ten Commandments or the Bill of Rights.  Actually, now that I think about it, even those suck.  Not making a carved image is on the top 10 commandments of a major religion or two? Not working on Sunday (or Saturday, depending on your definition) is more important than requiring charity and compassion for others?  The Golden Rule is one rule, not a g**damn top 10 list.  The Third Amendment in the Bill of Rights is protection from the quartering of troops in your house. Really? That makes the top 10?

8. No one even bothers to do them right — A Top 10 list should be a countdown from 10 to 1.  Some sense of order leading up to the most important or best.  Is there no appreciation for the build-up to the best anymore?  If you are going to do a crappy idea, at least do it properly.

7. Every good Top 10 has been done — Now we are subjected to an endless array of the overdone (Top 10 Beaches) or moronic and nonsensical (Top 10 Photos featuring Blue).  There actually is a Top 10 List website.  On its front page today, honest to god, two of the posts are: Top 10 Vegetables and Top 10 Ways to Pick your Nose.  Enough already.  Letterman does it better than any of us, leave it in his capable hands and stop being a follower.

6. They insult your readers — What you are basically saying is that no one cares to read anything unless it comes in bite-sized pieces.  While this may be true in our attention-deficit, click-and-move world, don’t feed the beast.   Shameless kiss-up to my readers… I have more faith in you.

5. They are just done for SEO purposes — SEO, for the non-blogging readers here, means search engine optimization.  All of us publishing on the web want our stories to appear near the top of the Google or Bing searches, and unfortunately people get on google all the time to ask for the “top 10” this and that. 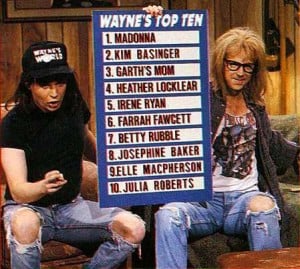 OK, maybe they aren’t all lame

4. It is lazy writing — throw up some photos of beaches and call them the top 10 best beaches in the world.  Throw up one measly sentence about this or that and call it the Top 10 Best Whatevers.  No depth, no thought, just damn lazy.

3. They are lame — Take a stand.  Ten is a cop-out.  Go for the Top 3 beaches or take a real stand and just go with your very best beach of all time.  Do we get to cast 10 votes for President?  Of course not. You get one vote.  Pick your best choice and run with it.

2. What the hell is up with 10?  Are there really always ten best of every single thing in the world? Why not 7 or 12 or 16, if you aren’t going to pick one? Ten is contrived. It is the number you pick out before you decide what is worthwhile. Ten made some mathematical sense in the old days, but we are now in the digital age, which is binary.  Go with Top 2 lists, I say.

1. Because it is long past time to put substance over style.  I shall endeavor to make this point with a simple question — can you think of any Top 10 post that you thought was an example of truly great and thoughtful writing?

Middlin’ to Average Moments in 2010