The Ultimate Train Challenge was a concept that I developed in my head a few months ago, while traveling in South America.  I have been a huge train fan, being an overland traveler for quite some time and was looking for a new sort of travel challenge after I got back from my round-the-world (RTW), overland trip in 2009-10.  My mind wandered to the question: “What is the world record for longest continuous train journey?” 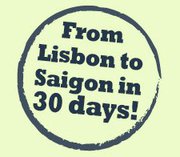 And so, the Ultimate Train Challenge was born.

Here is how it is going to work.  I have invited a number of great travel bloggers to join me in Lisbon, Portugal for a one-month train journey that starts on September 1st and ends thirty days later in Saigon, Vietnam.

Everyone is free to take whatever route they want to get to the finish line.  The variations of train routes in Europe are likely to be dramatic between all of us. The person or team that ends up in Saigon with the most miles traveled by rail will be deemed “the winner,” as long as they follow the rules.

The rules are likewise quite simple.

To make it a ‘continuous train journey,’ you can’t stop and sleep anywhere except on a train — no taking a sleeping break in hostels or hotels.  To make sure that people don’t just pile up easy mileage, you can’t go back into a country once you leave it and you can’t repeat a length of rail (e.g. you can’t take the Paris to Lyon bullet train back and forth to pile up miles).  Obviously, you also have to complete the entire journey by train.

The spirit of the trip is that it is an actual a train journey — that you are trying to get from Lisbon to Saigon — and in the meantime, you are traveling on the longest existing, continuous stretch of train tracks currently on the planet. 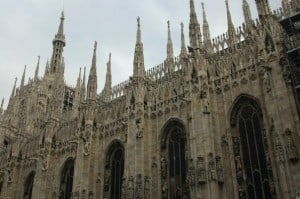 will someone chose an Italian route?

But just sitting on trains, trying to set a world record would be boring, so we are going to add a lot of entertaining side competitions and to-do’s for the traveling bloggers, which hopefully will bring enjoyment to those of you following along.  Given that I bring a slightly oddball sense of fun and humor to how I travel, I hope that everyone that is participating will dive in fully to those activities, because I think those experiences will be the ones that we will all be talking about at the wrap-up party in Saigon.

So here are the travel bloggers that I’ve invited to join me in this effort.  Ayngelina Brogan of Bacon is Magic, Derek Earl Baron of Wandering Earl, Anil Polat of Fox Nomad, Phil Paoletta of Phil in the Blank, Pam Mandel of Nerd’s Eye View, Jenny Leonard of Where is Jenny? And our fearless technology master, Chris Richardson of The Aussie Nomad.

As of today, Chris and I have got the Ultimate Train Challenge website up and running.

It is a bit of a skeleton right now, but we’ll be adding more content and explanation soon.  There are forums there, where we’d like people to participate in the planning stages, by given us ideas of routes and some fun challenges we can do on the way.  Go on over and check it out — subscribe to the RSS feed, and become a part of the challenge.

ADDED: An we are now excited to announce that Eurail.com is our primary sponsor!

71 thoughts on “The Ultimate Train Challenge — Welcome to the Adventure”