In honor of “Blog for New Zealand,” which is an effort to get the word out via dozens of travel blogs that New Zealand is open for business after the latest massive earthquake in the Christchurch area, I thought I’d do a post highlighting some of the many great reasons people should put New Zealand on their wish list of destinations.

I have written more about New Zealand than any other single location in my 300+ posts and for good reason. The people are perhaps the friendliest in the world and New Zealand packs more things to do in a smaller area than anywhere else I have ever been.

The Wellington Sevens – I love this event and I will be back there, if only to experience this weekend more fully (this time, I want to get tickets and actually go to the games). The Wellington Sevens is an international rugby tournament — seven being the number of players on each country’s team. The action is incredibly fast and furious and the entire game takes a total of 15 minutes and there are about 35 games packed into each day of the event. 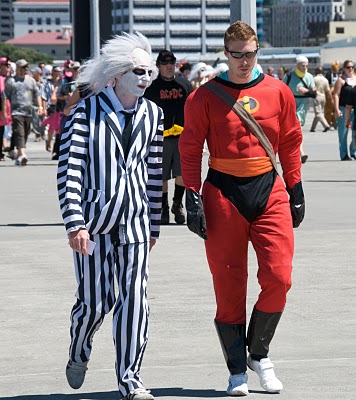 a couple long-time buddies going to a game

But the action of the game isn’t the only reason for my love of this particular weekend. The fans are insane. Everyone dresses in costume. Quite elaborate costumes. Think Bourbon Street on Halloween. Plus, add the Kiwi version of drinking, which is only rivaled by the Aussies (yes, the Brits can drink a lot, but frankly, the Kiwis and Aussies do it with the same volume, happinesses, and a none of the belligerence).

Hitchhiking in New Zealand – Another topic that I have written about multiple times, but certainly one worth emphasizing over and over again. The Kiwis might be the friendliest and nicest people on the planet. When I arrived and was discussing my travel thoughts for the two islands, numerous Kiwis asked me if I was going to hitchhike at all. Frankly, I’d never even considered the option, but on their universal recommendation I did. And then I did it again, and again, and again.

This was my first hitchhiking effort in New Zealand, where I got invited to meet my driver’s fiancees’ parents at a BBQ party…. and he hadn’t ever met them in person yet. Here was another hitchhiking effort on the South Island and yet another down there, where a local gave me a ride and some great insights on Queenstown. One thing I wish I had done, but didn’t, was renting a campervan and hitting some camping spots in New Zealand. 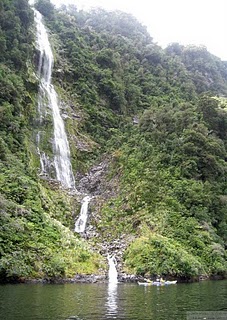 luckily it had rained earlier in the day

Milford and Doubtful Sounds – As if the people aren’t enough reason to go visit New Zealand, the scenery is so spectacular that you’d want to go even if the islands were uninhabited. Milford Sound is rightly world famous as one of the most scenic fjords in the world, but for my money, I prefer its neighbor, Doubtful Sound.

Milford Sound has more stunning vistas, but it also has the predominance of tourists, since it is far more accessible. I ended up doing a two-day kayak trip in Doubtful Sound and, aside from the sandflies, feel in love with the peaceful and relaxing experience of it all. Do both if you are in the neighborhood, but I’d suggest a boat tour on Milford with the tourist crowd and then two days in kayaks on Doubtful Sound to round off the whole experience.

And if anyone is there during the Great Naked Homer Tunnel Race (yep, an annual event), you might just see me running in it. Its on my long list of reasons to head back to these islands.

Fox and Franz Josef Glaciers – On the west side of the South Island are two of the most interesting glaciers in the world in that they descend from the Southern Alps right down to almost sea level, and peter out in lush, warm, temperate rainforest at that level. Though retreating quickly due to global warming, they are still a awe-inspiring sight and quite easy to access. I ended up going to see Franz Josef Glacier and got some great photos in addition to good exercise (I walked the 3-4 kilometers from town and back).

Things to do on my next trip back there: skydive over the glacier — one of the world’s best dives, which I couldn’t do on account of weather — and take a guided tour up and on the actual glacier.

Dolphin Cruise, Bay of Islands – One of the parts of the country that doesn’t get enough love in the press or from tourists is Northland, the spit of land on the North Island that juts up north of Auckland. Home to some of the best scuba diving in the world at the Poor Knights Islands and also the rugged 90 Mile Beach, I ended up spending some time around the Bay of Islands, which I couldn’t more highly recommend.

I ended up doing a dolphin cruise in the Bay of Islands (check out the last photo in that post), where I wanted to swim with the dolphins, but the pods that we ran into had infants in them, so we weren’t allowed to. As a side note, I was quite impressed with the professionalism of the guides and complete respect for what was good for the animals in not letting us get down in the water with them, but it is yet another reason I need to get back there soon. Northland is an area that you could spend a couple weeks in by itself, but I only had a few days.

I could go on and on about this fantastic place. Napier, a city completely destroyed by earthquake in 1931 and rebuilt in Art Deco style. The many and varied wine regions all over both islands. The famous All Blacks New Zealand Rugby team. The snow skiing in the Wakaka region (which also boasts one of my favorite little art house movie theaters in the world). The multi-day hiking on the nicest and best maintained hiking trails in the world. World class surfing. Whale watching in Kaikoura. The world’s first and most famous bungee jump. Black water cave rafting. The Maori cultural experience. Great train rides. Volcanic hot spas.

And did I mention the nicest and friendliest people in the world?

Back a few decades ago before I started any international travel, I was clerking during law school at the law firm in Little Rock Arkansas that Bill Clinton used to work at. One of the partners had a world map on the wall of his office with dozens and dozens of push-pins stuck in it. They were all the countries in the world that he and his wife had traveled to so far. There must have been 80 of them.

I asked him what the best countries in the world he’d been to. He said, “Well, New Zealand is number one. There are a dozen others that I love and can talk about forever, but number one is the easiest choice of the lot for me.” He went on and on about how good the food was in NZ as well.

After hitting about 55 so far in my travels, I can’t say that opinion was mistaken in anyway whatsoever.

I didn’t fly there, but there are plenty of good flights to New Zealand when and if you are ready to head down there. Seriously…. it is a must-see country that should be on everyone’s list of places to go to.

Heard (and seen) at the Wellington Sevens Rugby Tourny

36 thoughts on “Best of New Zealand”