Globetrotting travel writer Lara Dunston has authored, contributed to and updated some 50+ guidebooks for Lonely Planet, Rough Guides, and…. a lot more…  as well as published travel articles in magazines, newspapers and websites around the globe, from Wanderlust to National Geographic Traveler.

Are you getting my overarching feelings of jealousy and envy?  Wait, it gets better.

She and her photographer husband started travelling together 20 years ago. Based out of the Middle East since 1998, the couple have literally lived out of their suitcases since 2006. From 2010 to 2011, they traded hotels for holiday rentals and went round the world on a contemporary grand tour, an experiment in slow and sustainable travel, local travel and experiential travel, in partnership with www.homeaway.co.uk, in an negotiated deal that I will be forever in awe of.

They blogged about that on Grantourismo and she tweets here also. So go check out her stuff out in the many and varied locations you can find it and enjoy her answers to the Lucky 13:

1 – Your ideal dinner menu, if costs and logistics are no obstacle.

It would be low-budget and local, cause I’m a proponent of slow and sustainable travel, so you won’t find me eating oysters from Brittany in Bangkok. My ideal menu would be anything my husband chooses to cook for me, in whichever apartment we’re renting in whatever country we happen to be at the time – only with the lights out, candles on, and laptops and iPhones off for the night.

Although if you’re paying of course, I’ll take a couple of business class flights to Adelaide, Australia, with a car waiting at the airport to take us to Coffin Bay, where I’ll settle for two dozen succulent local oysters and a bottle of Grosset Clare Valley Sauvignon Blanc served up on the deck of a beach house you’re going to book us for the weekend. ☺

cupcakes, macarons and bagels, which I hear (sigh) are taking over from macarons in the silly food obsessions department. Girls, grow up. If you’re no longer a teenager and you’re not a mother, it’s time to start baking adult food.

intolerance [punishable by]  24 hours trapped in an elevator with your worst enemy. 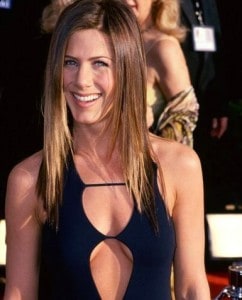 4 – Who plays you and your husband in the movie about your life?

Depends on the genre, but how about we make it a romantic comedy, as I’ve spent over half my life in love with my husband, who reckons I have a knack for physical comedy – especially at airports and train stations. (Don’t ask.) If it’s being made in Hollywood, where everything is pure fantasy, then why don’t we go all out and get Jennifer Anniston to put some weight on, not get her hair cut for a few months, and learn to speak Australian. We just need to make sure she doesn’t take lessons from Meryl (‘the dingo’s got my baby’) Streep, who sounded more like a Kiwi than an Aussie in that movie (which incidentally an old school friend’s father wrote). Jen will play me of course. ☺ 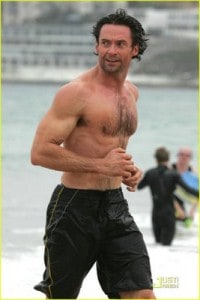 for the ladies out there…

As for who to cast as Terence, well that’s tricky… we could go for George Clooney, though I’m not sure he’d get the Aussie accent right. Russell Crowe is too beefy and not very funny. Mel Gibson is funny without intending to be but he’s too old and haggard. Let’s go for Hugh Jackman. I think Jennifer would like that.

5 – What is your favorite article of clothing?

(This is an unusual question for a guy to ask…) It would be a tie between a wildly patterned purple and white shirt that I bought in Buenos Aires 14 years ago that is sadly in storage in Dubai – I haven’t seen anything like it since – and a camel-coloured snake skin jacket that I bought from a thrift shop 20 years ago that is in storage in Sydney.

When I travel, the clothes I buy fall into two categories. I’ll buy clothes purely for practical purposes, and give them away when I no longer need them or we’re changing climates, and I’ll buy clothes by local designers as mementoes as much as anything and keep them long after I’ve stopped wearing them. I envisage that one day I’ll be an eccentric old lady wearing clothes from different eras and different places around the world.

If you need that kind of advice then it sounds like it’s been a long time since you’ve read a book, so just go out and buy anything, as long as it’s made of paper and smells as if it just came off the printer. Remember that smell? And anyone else who is reading this who hasn’t held a book in their hands for a while should do the same.

When you’re finished reading don’t leave it at the hostel or trade it for another – if people can afford to travel the world, they can afford to buy their own books – go and leave it at a local school or university instead. If you really want a recommendation: Alain de Botton’s The Art of Travel

7 – If it was totally paid for, would you and Terence go to a 5 star nudest resort? 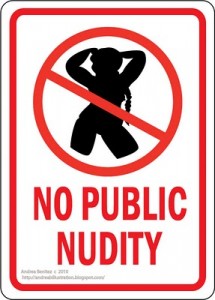 scared for life from hippy parents…

Most definitely not. My parents took me to a nudist camp when I was a kid in the late 1970s when they were going through a hippy phase. It scarred me for life. I now have a well-developed sense of aesthetics and I can tell you from experience that the vast majority of naked bodies are not very pretty to look at. What’s a “5-star” nudist resort anyhow? And how do you know?

Twitter of course! Because I can ask the world for advice and someone out there will generously give up some of their time to give it to me. The travel tips I get might not always be the best nor might they come from the leading authorities on the place, but it’s the same with a guidebook (remember those?) – a review of a restaurant might be out of date, but there’s a high chance it will take me to an area that has other restaurants. Twitter will do that too, but what will also happen is that one tweep will connect me to another and before you know it I’ve befriended a whole flock of chatty locals who are happy to share their secrets. Another book recommendation: Paul Smith’s Twitchhiker

9 – Best gift that you have given in your life? Best you have received? 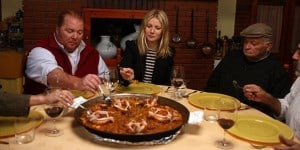 who came up with this TV show idea?

Is my spouse playing a nasty trick on me or does he genuinely want me to have a good time? If it is the former then it would have to be a vegan meal with someone like Gwyneth Paltrow – why would a vegetarian who doesn’t eat pork do a foodie-travel show in Spain? I guess if I asked her that question over aperitifs I could be thankful that the dinner would be curtailed quickly.

If it’s a gift, then it would be Alain de Botton, one of the world’s great contemporary minds. No other writer has got me thinking more about how we travel. I carried his ‘Art of Travel’ around for years. It would need to be a long meal, as I’d want to dissect the book and discuss all the bits I underlined.

11 – What is the most embarrassing thing on your iPod?

. I only bought it for that song ‘Get Back in My Life’ – all the other songs are crap – it was a huge hit one summer when we were travelling around Europe, and I like what it reminds me of more than the song itself. Don’t you love the way music does that?

12 – If you weren’t in the travel field, what would your ideal profession be?

I guess I’d be a filmmaker, which was my first passion before I fell in love with travel. Only when I was young, I made arty experimental works of fiction, now I’m older I’d make gritty documentary films rooted in reality.

13 – Four dinner companions you’d like to invite to dinner, with the caveat that they all have to be dead (dead now, obviously not at dinner).

All these questions about dinner are making me hungry. I’m going to choose two strangers and two friends. One of the Lumiere brothers to share what it was like to make the world’s first films and show them to audiences who’d never before seen the exotic lands that flickered on the screen. Freya Stark

, one of the world’s greatest women travellers, who charted out journeys to places still considered frontiers, such as remote parts of Yemen and Iran. My bohemian uncle, Sandy, who died far too young of an accidental death, who backpacked through Asia and Europe with little more than a toothbrush, some paperbacks, and a notebook, well before it became the cool thing to do. And my father, who also died well before his time, of cancer – he was another great traveller and storyteller who travelled all over Australia, but didn’t get to see as much of the wider world as he would have hoped. It was through him that I learnt that the best thing about travel is the people you meet in the places you go to.

15 thoughts on “Interview with Lara Dunston of Grantourismo:Lucky 13 Questions”