Skip to content
Home » Blog » Wadi Rum, Jordan: What Happens When It Rains in the Desert?

In the weeks leading up to my trip hosted and sponsored by the Jordan Tourism Board, I was excited about the opportunity to do a number things I hadn’t had time to do and see the last time I was through the area, but none was higher on my list then getting to see Wadi Rum and spending the night in a Bedouin camp there. 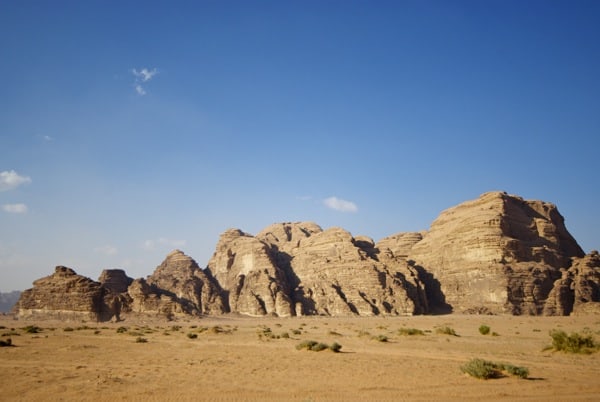 the harsh, but beautiful landscape of Wadi Rum

Wadi Rum is only about 40 miles east of Aqaba, where I’d just come from and after enjoying the many fun things to do in Aqaba, I was realy for a little relaxation.. It is the largest and most famous Wadi (meaning valley) in all of Jordan. It is one of Jordan’s most famous tourist locations, popular with hikers and rock climbers and also those that want a camel safari though its unique terrain.

But that wasn’t at all what I was fascinated by.

As you know by now, I am a huge movie fan. One of my favorite movies of all-time and one that should be on everyone’s list of movies to see on the big screen (it must be seen on a huge screen to get the whole effect) is Lawrence of Arabia.

Wadi Rum is Lawrence of Arabia

It is obviously just a fraction of the size that you should enjoy this Top 10 Movie of All-Time (a top 10 list that does not suck), but take the three minutes out to click on that clip and enjoy second of cinematic genius. It defines the word ‘epic.’

We got to Captain’s Desert Camp where we were going to spend the night, dropped off our stuff and then took and afternoon jeep ride through Wadi Rum. 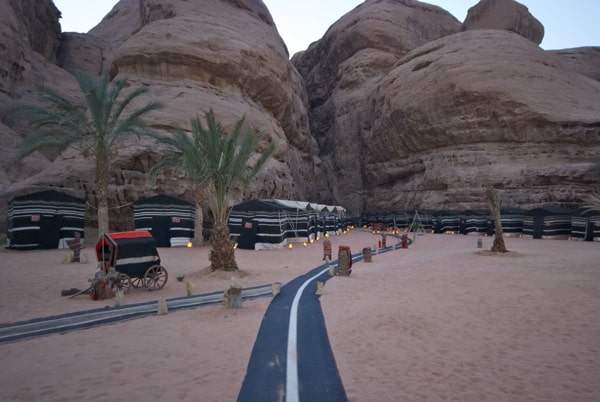 the tents at Captain’s Desert Camp at dusk

Wadi Rum itself was what I’d be anticipating for days. The color of the sandstone walls seems at places as if slowly melting into the floor of the desert beneath them. When the jeep stopped and I got out to take photos, the complete silence engulfs you, only to be disrupted by the sound of the wind.

When I shut my eyes, I could imagine that I was actually in Lawrence of Arabia

and about to join the rag-tag army attacking the mighty Turkish guns of Aqaba.

The hills in Wadi Rum reminded me a bit of the hills of Namibia — or eastern Utah. The colors are rich oranges, blood reds, and vivid rust. The shadows play across the crags and faces of the hills, bringing highlights and contracts to the shapes and colors. A simply magical place.

T.E. Lawrence, in his book, Seven Pillars of Wisdom

described it far better than I ever could:

‘They were not unbroken walls of rock, but were built sectionally, in crags like gigantic buildings along the two sides of their street… They gave the finishing semblance of Byzantine architecture to this irresistible place: this processional way greater than imagination… Landscapes in childhood’s dream were so vast and silent’.

After we drove around Wadi Rum for a few hours, we went to a spot which was supposed to be a good spot to see the sunset. There were low-hanging clouds over the horizon and as we pulled up, the driver turned to my guide and I and said, “rain tonight.” 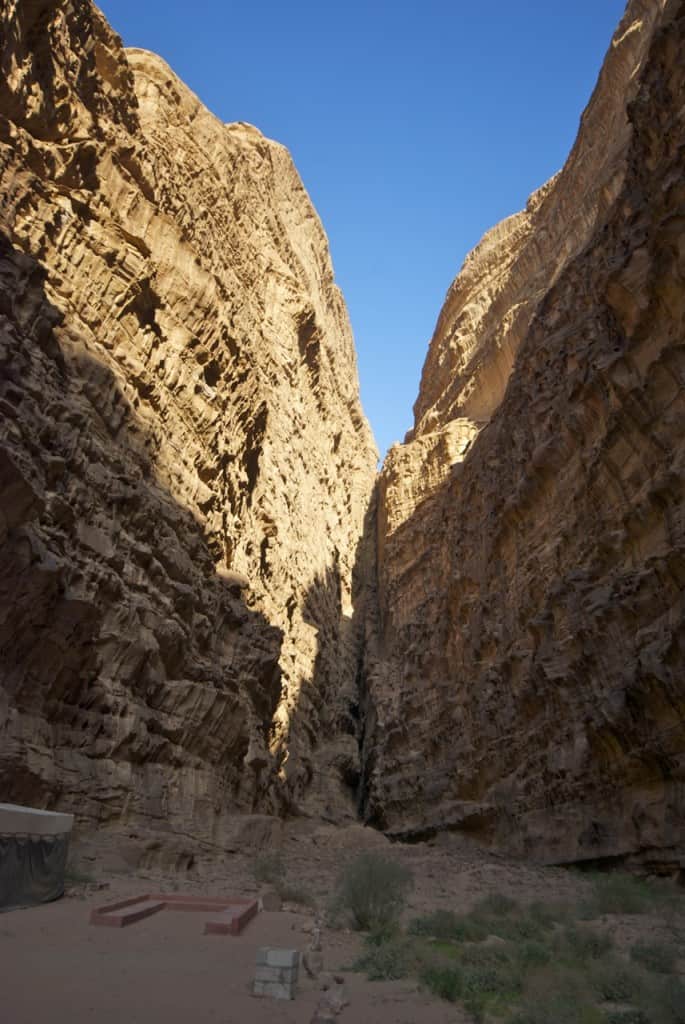 one of the slot canyons

No truer words have ever been spoken.

My personal run of magic ended shortly before sundown. The clouds on the horizon made it so that I wasn’t able to enjoy the sunset, so we drove back to camp for dinner. The traditional Bedouin meal was excellent. The rain started to fall gently right after dinner.

Afterwards, a few of the locals broke out a drum and a guitar and sang a number of songs for us as we drank Bedouin tea.  I wish I would have learned how to play guitar so I could have joined along with them. It was such a nice way to end a peaceful day.

I went to my tent early, around 9 p.m. and watched a TV show or two on my computer before falling asleep.

But there would be no sleep in the tents on this night.

The rain picked up its intensity. A slow drip started from somewhere above me onto the corner of my bed, but it didn’t seem like that big of a deal. I didn’t have any lights in the tent, so I didn’t really pay that much attention to anything.

About an hour later, I could hear Mohammad, my guide, outside walking up and down saying, “Michael, where are you?  Michael?” I asked what was wrong, and he said “some of the tents are flooding – we need to move to Aqaba tonight. Now!”

Now, Wadi Rum is in a fairly arid part of the world, but it does occasionally rain there.

Although I was there in one of the best months to visit, I had caught a bit of bad luck with this torrential downpour. Once I got my stuff packed and got out of my tent, I realized how hard it was raining.

It wasn’t Old Testament-style rain, but you could almost see the Good Book from where I was standing. I could have sworn I heard someone banging around like they were building a big boat… or ark… or something.

Pools of water were overcoming the walkways. It was amusingly difficult to find our way to the car, in order to make the drive to Aqaba and a more normal hotel. My boots were caked with mud by the time I hoisted my backpacks into the car and followed them in myself.

After we got all our stuff in the car and closed the doors, Mohammed turned to me and said, “are you sure this is OK?” (meaning moving to Aqaba that night instead of the morning).

I told him, “absolutely… rained out in the desert? Much better story than a simple night’s sleep.”

And I’d go back tomorrow. Now, off to Amman and the Royal Automobile Museum to check out more history.

the tents, tables, cushions and more set up for a dinner feast 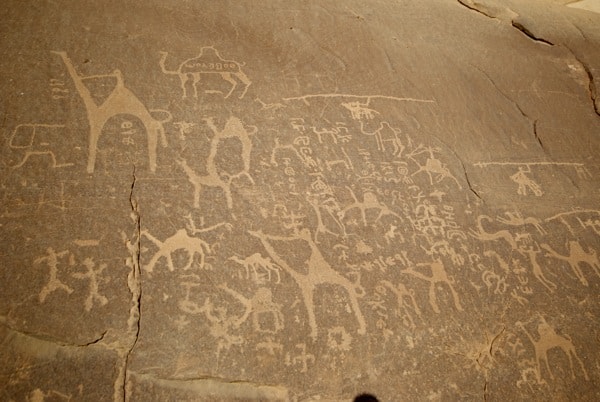 ancient carvings in the wide of one of the mountains 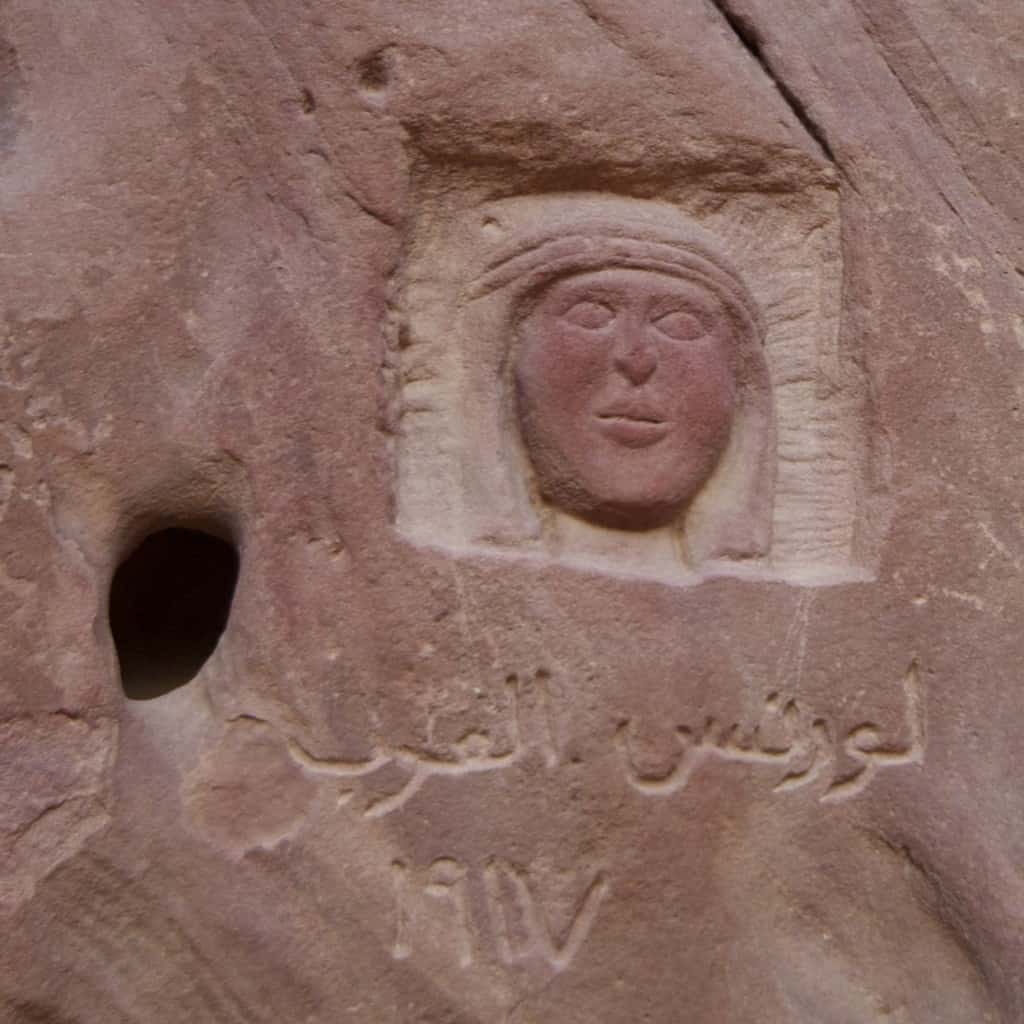 portrait of Lawrence of Arabia carved into a rock 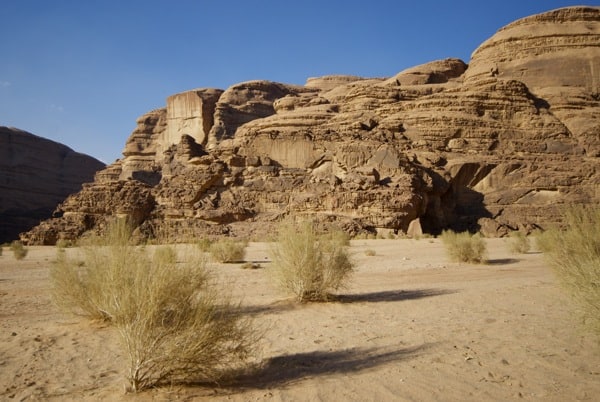 For the story of a non-rainy night with a real Bedouin experience, check out my friend Melvin’s post. Keith saw Wadi Rum from above… and made me very jealous for not leaving the ground myself.

50 thoughts on “Wadi Rum, Jordan: What Happens When It Rains in the Desert?”