Skip to content
Home » Blog » TBEX 2011 Review (Part One): In Need of Some Professionalism and Basic Organization

Yesterday, I was getting a post-TBEX bite to eat with some of my favorite travel bloggers, Ayngelina of Bacon is Magic, Jenny of Where is Jenny, Gareth of Tourist2Townie and Dylan of The Travelling Editor. We walked up to the street food cart and the guy working there asked, “are you guys travel bloggers here for that TBEX thing??” We told him yes and he said:

I heard it was so unorganized that it was more the intentional “unconference.”

When the guy running the local food cart knows your conference is unorganized, you have a problem.

The food stand guy’s name is Michael and his Twitter handle is @reupbbq.  The food is great and if you are in the area, make sure to hit up his stand for some wonderful barbecue.  And if you hate this post, don’t harass him, he was just passing along what he’d heard. 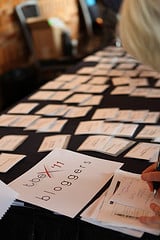 First things first — It was beyond amazing to meet everyone at TBEX. The travel blogging community is one of the most talented and interesting that I’ve yet encountered. Meeting people here was great, but I want to talk about the actual conference for a bit.

Gary Arndt from Everything-Everywhere gave the keynote speech ending TBEX and as usual it was chock full of thoughtful insights, one of which was basically a call for us bloggers to “be more professional.”

TBEX could stand to take a big dose of Gary’s wise advice.

Disorganization is a sign of unprofessionalism. For every talk I heard from amazing travel writers that said things like “misspellings and typos reflect on you as being an unprofessional writer,” I wanted to raise my hand and say…

“Sort of like microphones or AV systems not working in almost every meeting room shows this conference was put together half-assed and unprofessionally?”

For me, the disorganization began long before the actual TBEX conference started. There were speakers that didn’t get the topics they were supposed to talk about until about a week before the event. As a result, no one knew what topics were going to be offered until just a couple weeks before the event. 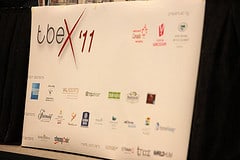 There were also what seemed like a dozen parties that were thrown by sponsors that very few people knew about in time to sign up. Private parties are fine, but it struck me as rude that three parties were listed on the official TBEX schedule where the invites were limited attendance and exclusive events that not everyone was invited to.

The first thing that struck me on-site was there wasn’t any coffee. Look, I realize this is an incredibly minor point, but seriously — I don’t think I have ever been to a conference that doesn’t have coffee. We asked the poor, overworked interns and volunteers at the front desk about it and they said we should just go across the street and buy some coffee.

Unbeknowst to them, there was a very nice hospitality suite sponsored and paid for by American Express around the corner with coffee and food.

How the hell do you not tell the people working for you that room exists?! Can you imagine how American Express must have thought about that? They paid $25,000+ to sponsor the event, set up a nice room for all of us to enjoy their hospitality, then the people working the event don’t even know about it.

Minor point for sure, but it set the entire tone of unprofessionalism for this entire conference. Some more examples:

To some extent, all of this stuff is minor, but appearances matter. Like misspelling words in your pitch letter to an editor  — you are just telling your audience you don’t take them seriously.  I was hearing from literally dozens of bloggers (and more than a fair share of sponsors and PR people) that were aghast at how poorly the whole event was put together.

This event has now been around for three years and the organizers knew months and months ago that 500+ people were going to show up.

If you are incapable of running a conference of that size, then damn it, go hire a professional and have them do the ground work, while you concentrate on the substance.

Here is why all of this should matter. TBEX is attempting to set itself as some sort of unofficial travel blogger association (and is thought of as just that by far too many bloggers, in my opinion) and its disorganization and unprofessionalism reflects on those us that attend. 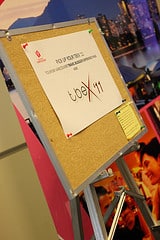 I could almost hear some of the PR people I was talking to thinking to themselves, “if the conference putting themselves forward as leaders in this industry is this unprofessional and unbusinesslike…. why the hell would I want to work with the attendees?”

In my eyes, this event just smelled like it was put together during a happy hour by a few people that wanted to make a bunch of money leveraging the appearance of 400 or so travel bloggers to cash in with PR people and sponsors. The disorganization, almost complete lack of planning, and unprofessionalism gave off the strong stench that the primary concern was maximizing profits from the whole endeavor, instead of doing everything humanly possible to make this event worthwhile to bloggers, PR people, and sponsors.

A couple points that I am sure are going to be made in the comments that I might as well address now:

“We only paid $80 for our ticket, how much should we really expect?”

First, this event makes huge money. Let’s do some math (and I’ll address this more in one of the subsequent posts). 400 bloggers paying an average of $60 per ticket, including the discount prices, equals $24,000. 100 PR people paying $400 per person, again factoring in early prices, equals $40,000. I am told that some sponsorships went for $25,000 per sponsor. I haven’t verified more on that side of it, so lets do a conservative guess and say $150,000 of sponsorship income. That’s more than $210,000 worth of gross income.

Secondly, most of the stuff I am talking about isn’t money related. Having video, audio and microphones work isn’t a cost issue, it is simply a “give a shit” issue. Having people properly informed at the front desk isn’t a cost issue. Knowing what the damn speakers were going to talk about and having the rooms organized is not a cost issue. Would hiring a conference organizing professional cost some money? Absolutely, but given what I have heard about the huge amount of money they make from this event — it would seem to be a worthwhile investment.

Third, the ticket price isn’t the only cost to people. Many bloggers flew in from quite distant locations, changed their travel plans, and incurred significant costs in food, lodging and plane tickets to get here and stay here.

“We should give the TBEX crew credit for starting this whole thing and giving us all a great opportunity to meet each other.”

But they are delivering a half-assed product when it actually comes to the conference itself. Getting to meet all the travel bloggers was great, but this conference was a stunning disappointment to me. I am in awe of the talent of the travel blogging community, but far less impressed with the product I consumed this weekend here — though that was absolutely no fault of the speakers or participants.

Part II of my review is here. Thanks.

My surprising love of the big city of Toronto

215 thoughts on “TBEX 2011 Review (Part One): In Need of Some Professionalism and Basic Organization”