Skip to content
Home » Blog » Running of the Bulls in Pamplona, Spain 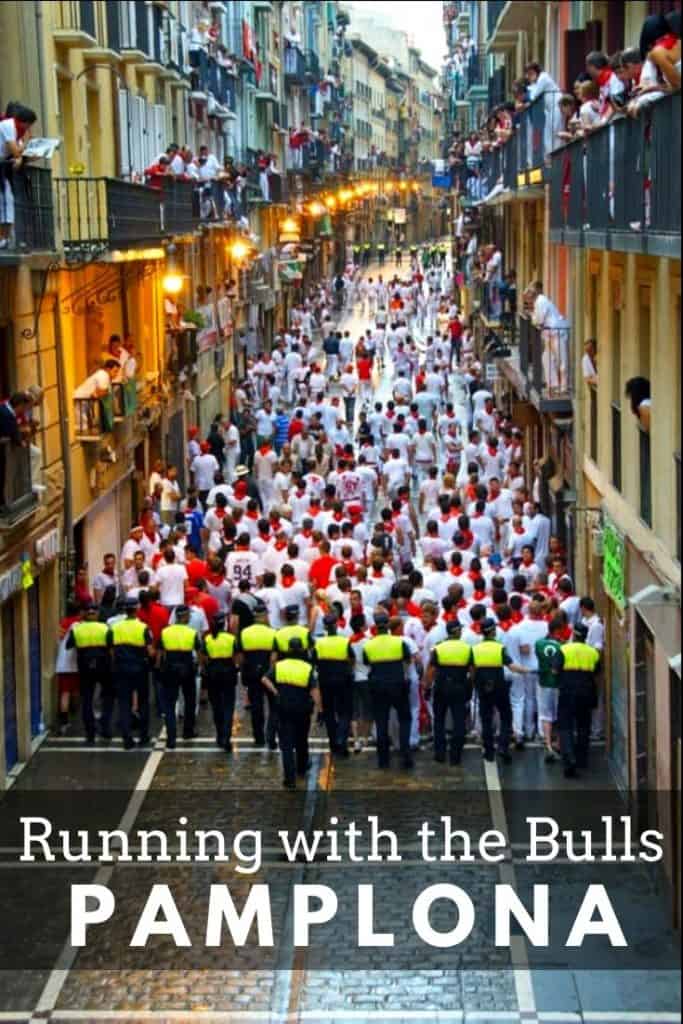 The seven-day festival in Pamplona during the Festival of San Fermin has become, since Ernest Hemingway made it famous in 1925 in The Sun Also Rises

, all about the Running of the Bulls. It is a testament to the power of the written word that its current popularity still has so much to do with a book written almost one hundred years ago.

I went to Pamplona on my second day in Spain, after a rather long night out, jet lagged, with Sherry Ott and Russ Brooks, which meant that the train ride over and most of that Friday were spent working off a slight wine hangover. How so very Hemingway of us.

Russ had found us a nice place a little outside the main part of town, which was quite a feat given the number of people in town. The prices for everything in town during this week, especially the room rates, are massively inflated and every place is booked. There are kids camping all over the place, including sleeping in various parks and even right outside our hotel, on blow-up mattresses. Are they here for the running with the bulls… or the party? Perhaps both, but they do bring a certain energy to the whole thing. 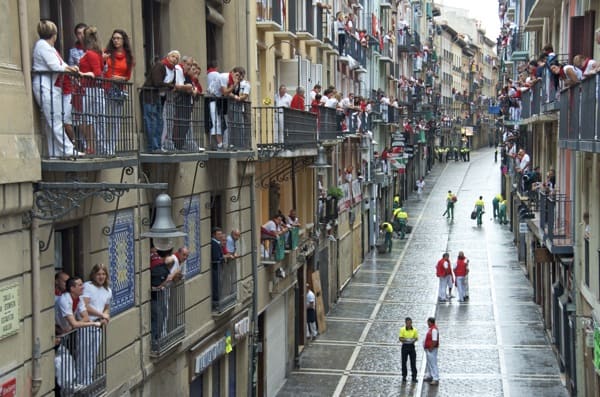 watching from the balconies overlooking the route, beforehand

In fact, one of the negative themes to the weekend was on that front: kids partying all over the place. I’m all for a good drink or three, but the level of partying in the downtown area each night (and morning) was at a level I just simply can’t, or won’t do anymore. There is something about seeing a bunch of people still wasted at 6 a.m., as we came into town for the running, and still drinking who’s appeal, if it ever existed before for me, has long past its way.

On the other hand, one of the amazingly cool, and completely unexpected things, about the entire time is that everyone dresses up.

Pamplona’s normal population is about 300,000 people or so. During the Running of the Bulls, reports are that approximately a million people show up during the week.

I’d bet well over 80% of all those people (including the locals just walking around town) are wearing white pants, a white shirt, a red scarf around their neck and a red sash tied to their waste. You can find the outfits all around town and it will cost you about $20 to buy the whole thing. Do it. Not only because you just should, just to do it, but because literally everyone is wearing it and you should make an effort to fit in. 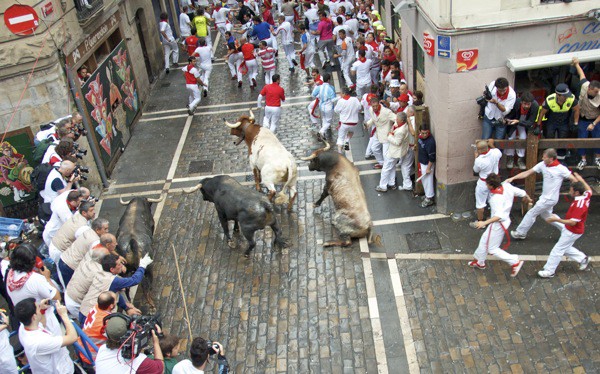 bull down… bull down!!

Russ and I ran with the Bulls on Saturday morning.

Here’s the short version of what you need for the running of the bulls in Pamplona:

You need to get to the street where the running takes by about 7 a.m. at the latest. You can mill around on the street for a while, but the police will start pushing everyone back from the middle portion of the route, pushing them to closer to the beginning or end, around 7:15 or so. It gets pretty crowded in the area where they push you back to, but the spirit is good in the crowd and that is usually when the chats, songs, and clapping amongst those of you about to run begins. 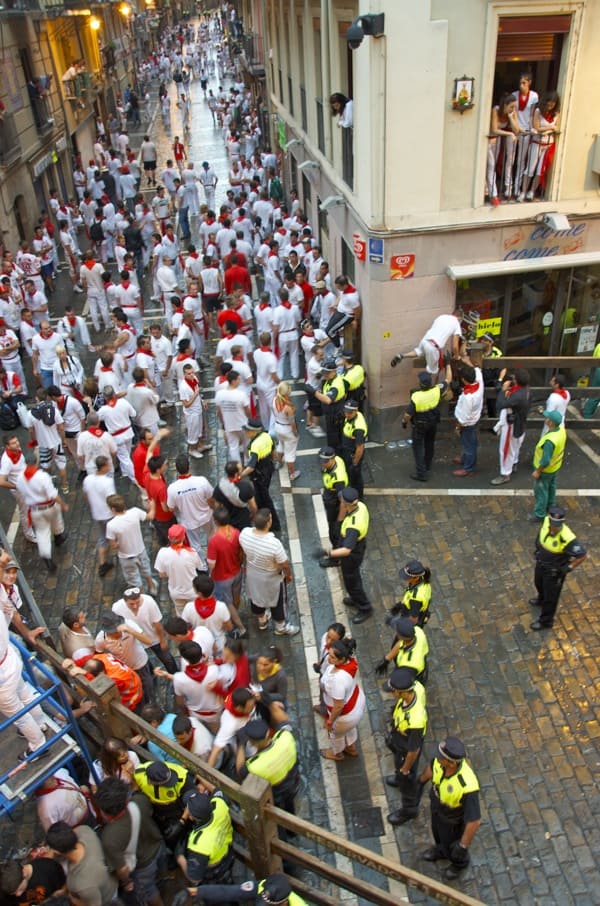 police moving the runners back, before the race 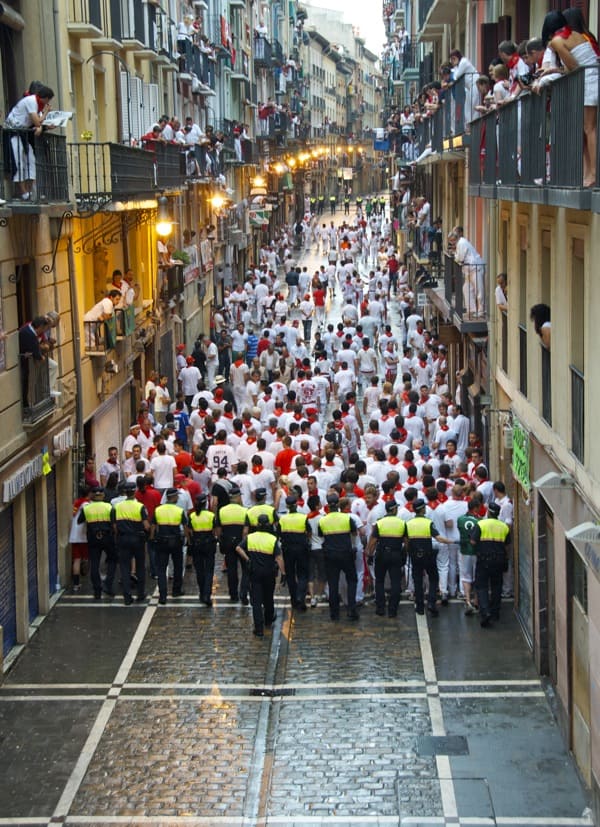 pushing the crowd back down the main street, pre-race

At about 7:45 or so, the police step back and let the runners on the street go to wherever they want to start their run. Russ had done some research, unlike me, and had decided that we should set up just the other side of Dead Man’s Corner. The bulls come running down the street into that 90 degree turn and usually bounce off the barrier there, before starting down the main street to the bull ring.

We positioned ourselves on the side away from where the bulls bounce off the barrier and prepared for the excitement.

At 8 a.m. you hear a rocket go off in the distance. That is the signal that the gates of the corral holding the bulls has been opened. A couple minutes later, you hear a second rocket go off. That means that all the bulls are on the streets and running.

It is at that point that the crowd starts getting a little restless and jittery. You know the whole Running with the Bulls only takes about three or four minutes and that they aren’t far off from whereever you are waiting for them, but because of the size of the crowd, you really can’t see where the bulls are coming from. 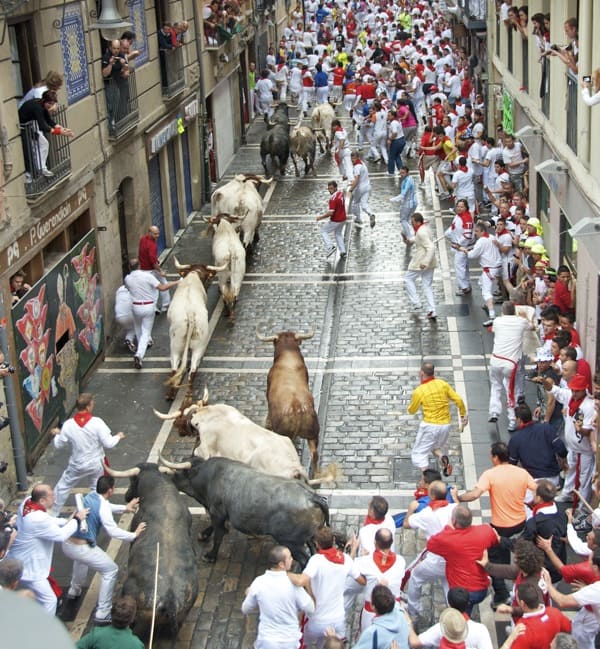 A short minute after the second rocket, the crowd started surging forward. The bulls must be just on the other side of the people coming towards us. Then we heard the telltale sounds of the bulls running into the barrier about 100 meters from where we were standing.

The Running of the Bulls…. It was on. 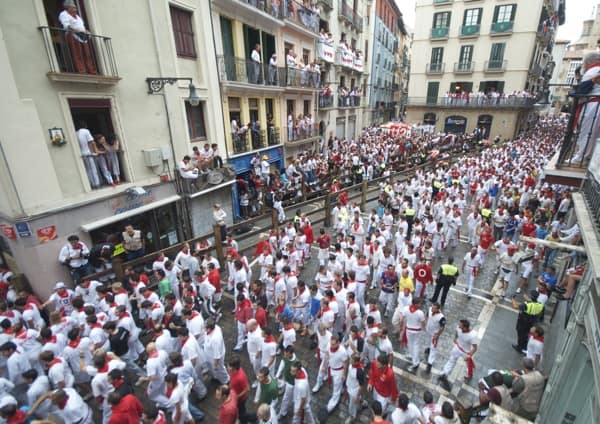 runners moving into place, after the police let everyone by

And as quickly as that, it’s over. The first group of eight or so smaller (and faster and more dangerous) bulls raced right pass where we were. We perhaps ran next to them for 20-30 meters, maximum.

The second group of larger bulls came by about thirty seconds later, with the same rush of people before they got to us, and we were slightly more ready that time. We ended up running with them for maybe 40-50 meters or so and then attempted to keep running, in order to get into the bull ring before they shut the gates (the bulls run into the bull ring and out the other side, but they release some young bulls with taped horns to run amok with the runners that get into the ring before they shut the gates).

We didn’t make it down there before they shut the gates off.

All in all, Russ and I both decided it was one of those events that was worth doing once in life, but that it was incredibly anti-climatic. Now, if you want to run down the middle of the road, right in front of the bulls like some do, you are going to get your full fill of excitement, but it is also a great way to get trampled.

(Side note, if you do fall down in the running, stay down. Let the bulls trample over you, until someone picks you up and moves you to the side. Getting trampled is far less dangerous than trying to get up, getting your body right at horn level, and getting gored, which is how the last person that died during the running died.) 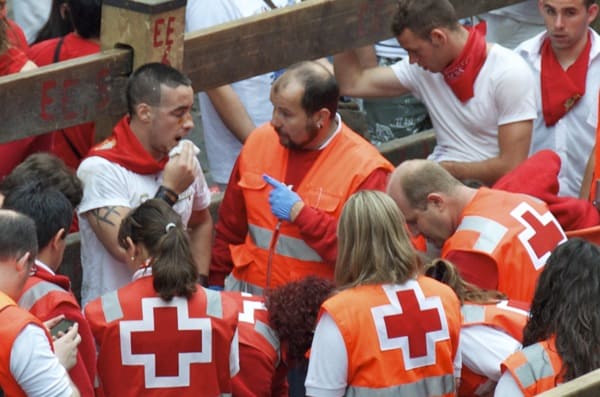 slightly beaten-up guy with EMT after the race

So after Saturday, Russ and I were a little bummed, though we didn’t drown our sorrows with the partying kids that night on the main square.

Luckily, the next day made the entire weekend worthwhile.

We knew we wanted to watch the Running of the Bulls from one of the balconies for rent over the route. Russ called a couple people from numbers that were posted up on the balconies and fliers on the street (helpful hint: a good bit of Spanish is necessary for these calls). We took at a look at one place and thought it would be OK, but then we went to the second place and it was close to perfect.

It was right on Dead Man’s Corner, with a view up the main street after the bulls turn that corner. The sight lines were great. The price was high (75 Euros), but totally worth it. I love my shots from up there and Russ is going to post a video he edited off his camera and my smaller point and shoot — both of which were running the entire time.

It was a true spectacle to behold from above, where you can really see the action. It made the entire weekend not only worthwhile, but one of the better sporting events I have seen in my life. Fast, furious, dangerous and likely to be outlawed in the near future (the Catalonia region of Spain has already prohibited it), this is one of the events in the world that you should get to see as soon as possible.

And to finish this post off, for those of you that want to know why it might be a bad idea to run right in front of the bulls and risk their wrath, enjoy this photo sequence. 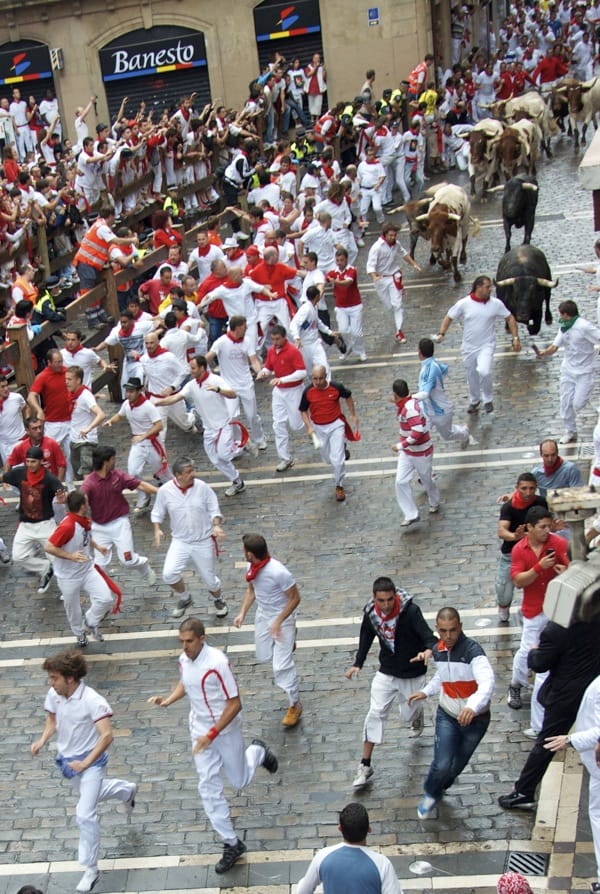 keep an eye on the guy to the upper right 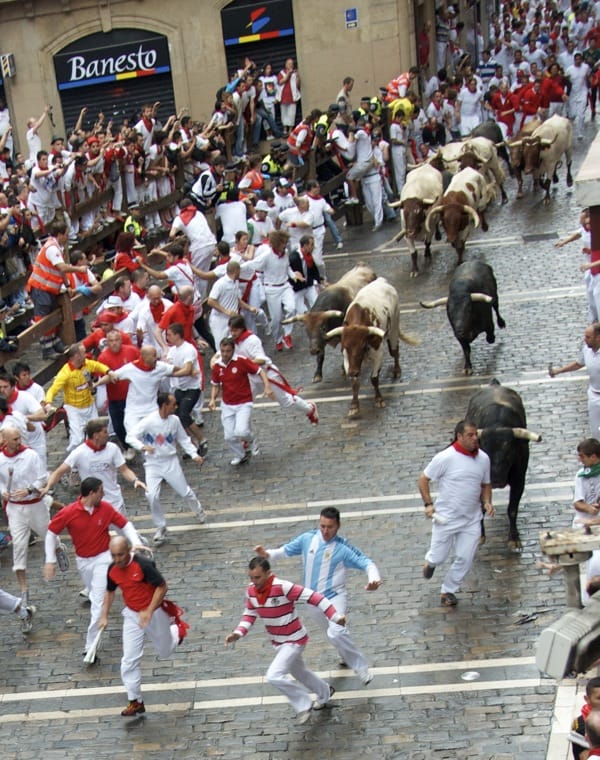 ummmmmm, these bulls can actually change direction and go after me??!! 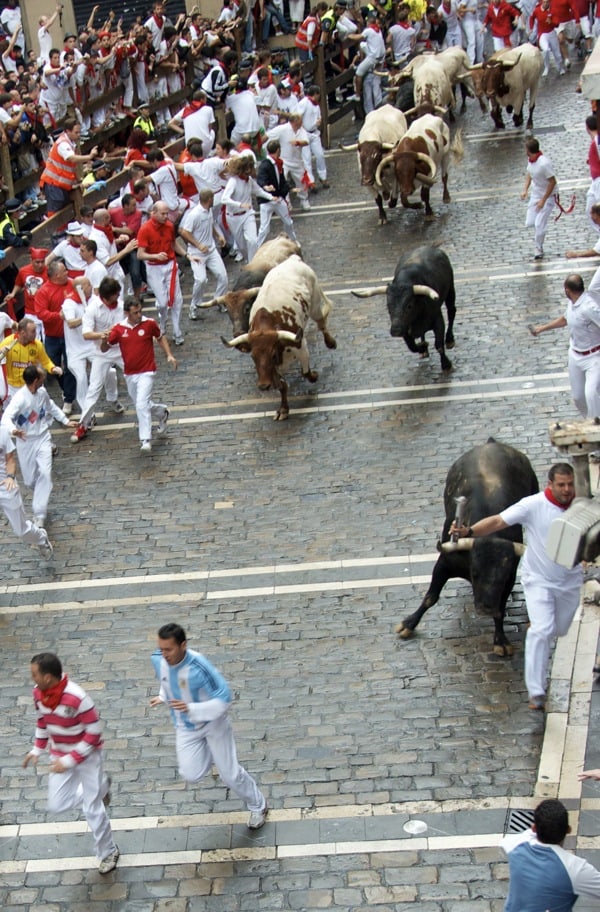 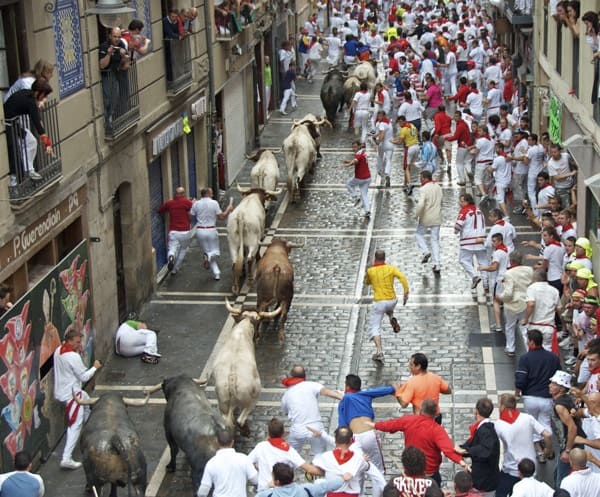 the last guy actually got away, the guy on the ground in this shot was very trampled though

Russ on the balcony at the end 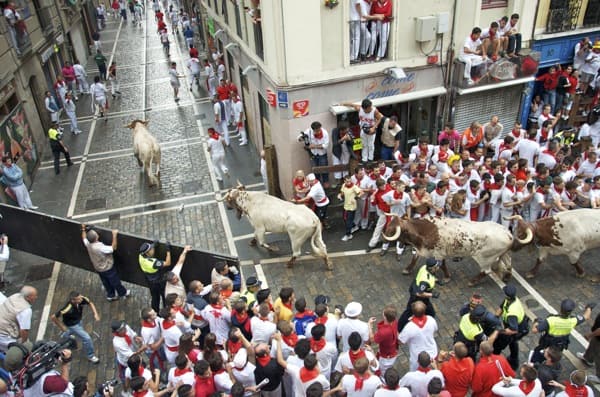 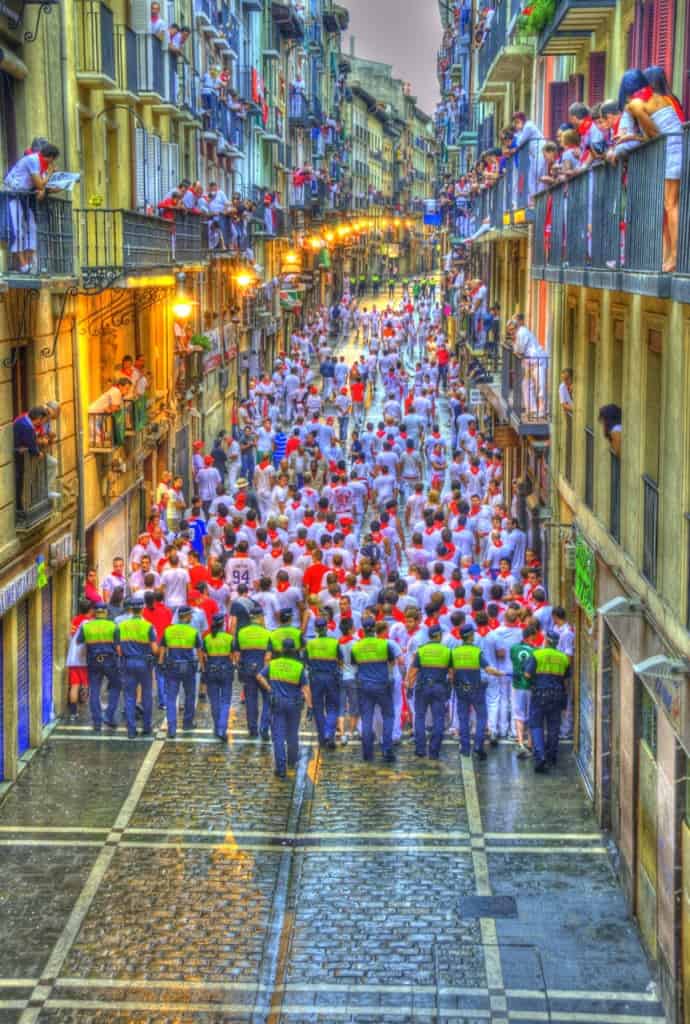 another one of my funky tweeked out shots 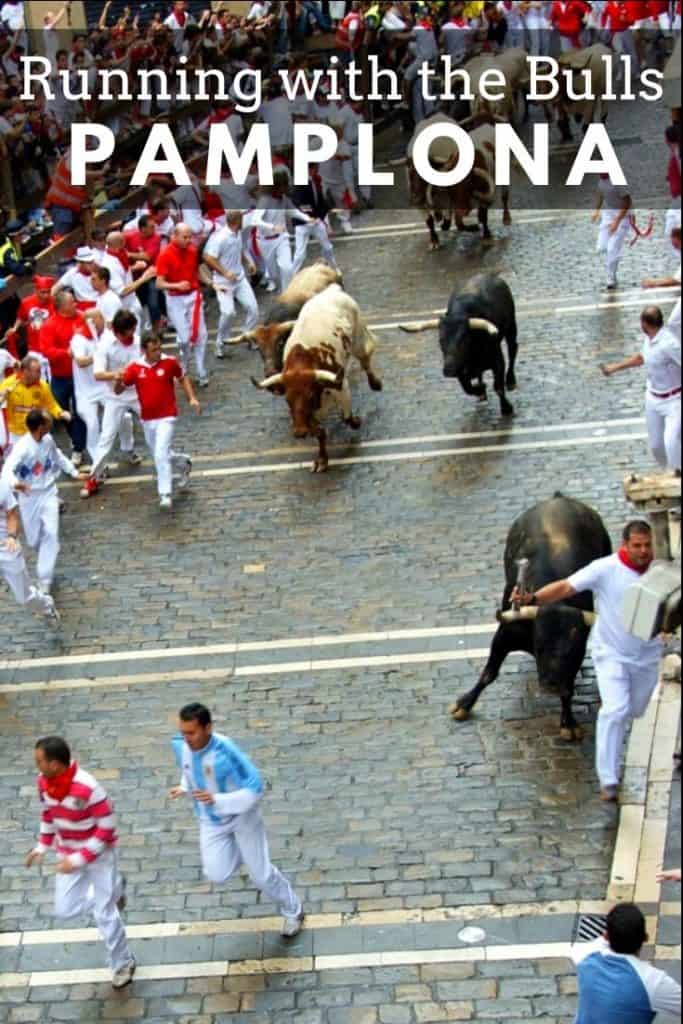 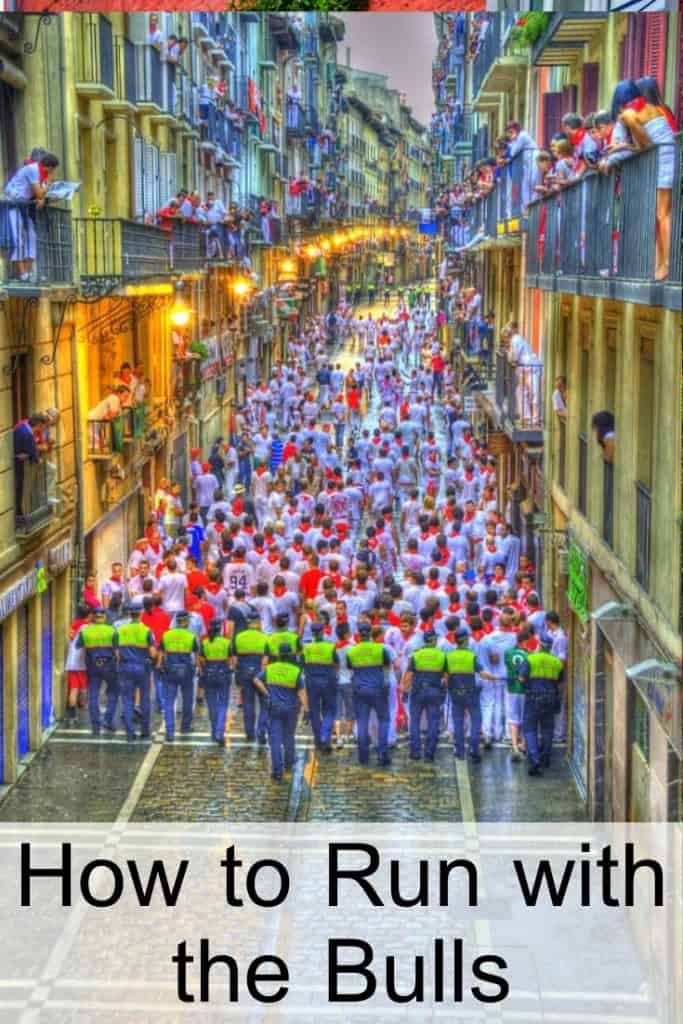 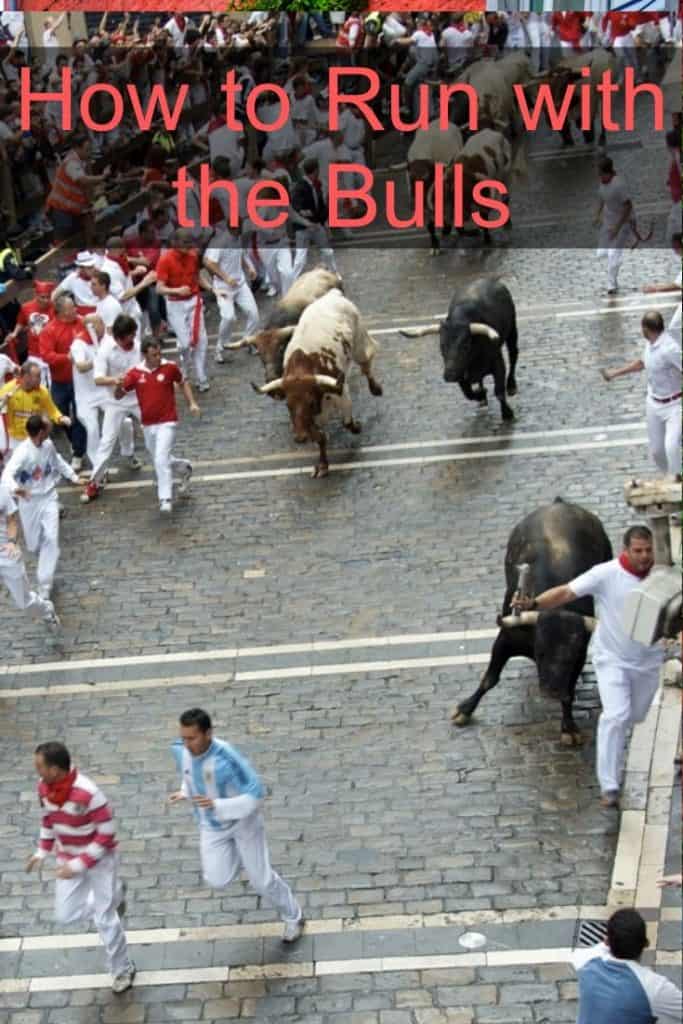 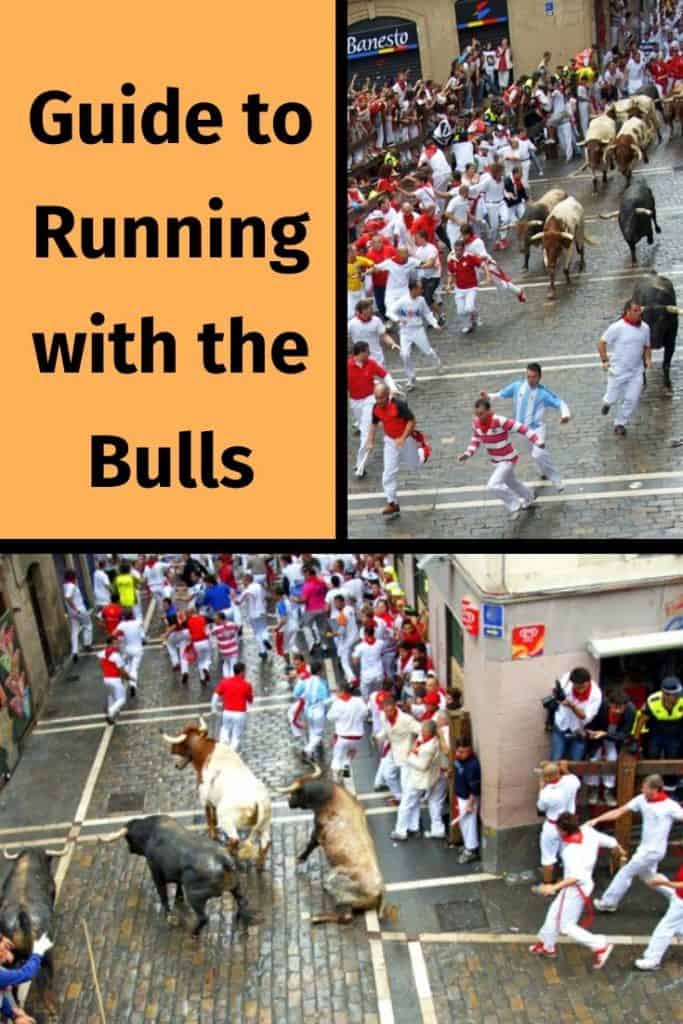 Running with the Bulls in Pamplona

to Khartoum, Sudan from Gondar, Ethiopia

69 thoughts on “Running of the Bulls in Pamplona, Spain”