I was in Vancouver for about ten days, before and after the 2011 TBEX Travel Bloggers Conference, a few weeks ago. It was my first time in British Colombia and I have to say, I can away quite impressed. Vancouver is pretty expensive for my Third World tastes these days, but it is a wonderfully diverse city, perched on a series of points overlooking a pretty spectacular body of water surrounded by snow-capped mountains.

One of the reasons I stayed a few extra days was that the finals for the NHL hockey league (the Stanley Cup) were being played while we were there, between the Vancouver Canucks and the Boston Bruins. I’m not a huge hockey fan, but the chance to see the local fans here cheer their team on, in their national sport, was too good to pass up.
httpv://www.youtube.com/watch?v=clAo1lSXTJ4

Odd side note: during the games, one of the Canadian banks had a television ad on it that said something like, “it’s been 18 years since Canada had the Cup — bring it back to Canada.” I thought that couldn’t possibly be true. Has it really been that long since a Canadian team won it all? After all, this is the national sport of Canada. So, I looked it up.  Amazingly, the last Canadian team to hoist the Stanley Cup was the Montreal Canadians in 1993.

So while I was going to say that Canada had something over the States, in their hockey skills and dominance… guess it is just yet another thing big brother does better than little brother. (And yes, I am completely kidding — love me some Canada and Canadians).

One thing that Canada does completely kick our American asses at is our respective national anthems, at least in my eyes. I am not a huge fan of the Star Spangled Banner — O’ Canada is so much better to my ears.

You can really belt it out with some passion, as these fans did before Game 7 at the bar where we watched the game (above video).

Before the game, I walked around the open air part of downtown where a large crowd was going to watch the game on a massive television set up slightly outside the stadium.

I really didn’t get that great of video from there, but at one point a few Boston Bruin fans walked through the crowd in their Bruin jerseys — brave group of folks.

As you are no doubt aware, the post game situation deteroriated into a horrible situation. Basically there was a small group of idiots that were planning on starting some riots — personally, I think no matter if the Canucks won or lost.

As it turned out, they lost, and a small bit of downtown was engulfed in some mayhem that you likely heard about. 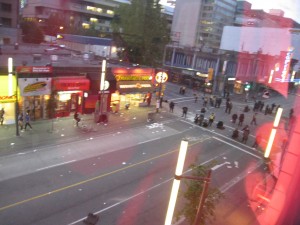 the police massing on Granville Street

The epicenter of the riots was actually on the street right outside the hostel I was staying at, on Granville Street. So, Jenny from Where is Jenny and I watched for a bit from her dorm room on the second floor of the hostel.

It was interesting to watch, until the police decided they were going to disperse the crowd. The method…. tear gas.

Although we were watching from behind closed windows on the second floor of the hostel, when the tear gas went off on the street right below us, it quickly billowed upwards and blew us away. The effect was immediate and all I can say is that I was incredibly thankful the window was closed. I don’t think I could have taken it if it wasn’t. 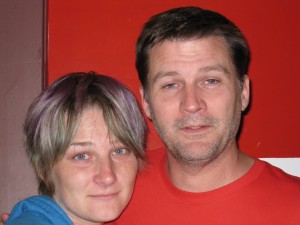 Just the short burst we got caused my eyes to immediately water up, my throat to constrict, as if it was full of cotton balls (cotton balls that also tasted horrible). It caused an immediate coughing fit and although we didn’t get it bad at all, I’ll be happy if that is the only time I ever get tear gassed in my life.

One fun note from The Globe and Mail, which is the newspaper of the area, a couple days after the riots. There was a section of the paper where people could write in and try to get in touch with someone via the newspaper. I loved this one:

Wednesday, June 15, 8:30 p.m.. Georgia Street, near the post office. You: Female, 38 to 45 in an old-school blue Canucks jersey. You were posing for a photo in the front of a burning car with the backs of your hands tucked under your chin, and smiling in a totally cute way. Rhinestone -studded sunglasses on your forehead. Me: I was standing next to the guy who snapped the pic. Burrows jersey, shorts, baseball cap and beard. (My friends tell me I look like Turtle from, like, season two of Entourage). Glad to know there are still women in the city who aren’t all worried about straightening or whitening their teeth, are willing to let their roots show and who aren’t all paranoid about over-plucking their eyebrows. I hang at T-Barz. Let’s hook up, and make something good come of this riot.

Let’s hope that happened in the end.

Great places to eat in Vancouver

How to beat the winter blues in Beautiful British Columbia