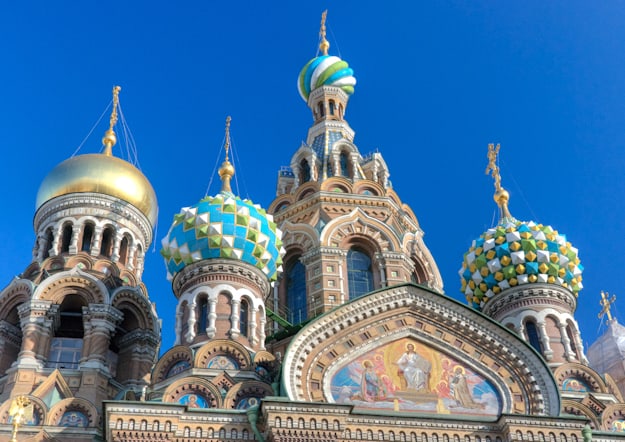 Church in St. Petersburg from my last trip, but get in the Russian spirit and roll with me here

Well, it is September 15th, and I have made it to Moscow. This will not come as a shock to any of you that read this site, but I am here a day early, because I didn’t pay any attention to the various emails from Jeannie, the Nomadic Chick and Nora, the Professional Hobo on when they were going to arrive. I thought they were showing up today also.

Planning is not my forté.

Before I get to the update, I have a plea, a request, a heartfelt “HELP US, PLEASE” from the three of us.

We are trying to raise $10,000 as part of this quest — from you, our readers and followers — all for charity. Not a penny for us. We simply want our journey to make a slight bit of difference to those that really do need our help.

We are so far from our goal that I can barely think of anything else.

We have partnered with the Vietnam Veterans of America Foundation (VVAF) to help children suffering from disabilities in Da Nang, Vietnam.

Since 2006, Vietnam Veterans of America Foundation (VVAF) has worked closely with the Center for Children with Disability/Agent Orange, and Children of Disadvantaged Background, run the Da Nang Association of Agent Orange Victims (DAVA). It’s a rehabilitation, day-care and respite center for children with disabilities.

100% of donations from individuals and organizations will go to the DAVA center to support the on-going activities, including rehabilitation, day-care, special education, vocational training for children with disability, home-based rehabilitation programs, support for parents/care-takers, funds for surgeries, wheelchairs; programs to train physical, occupational, and speech therapists.

Eurail.com has been nice enough to agree to kick in some money for every booking that comes through the UTC website, so make sure you head over there to buy your Eurail Pass.

The three of us are going to the center after the Ultimate Train Challenge to deliver a check. I ask of you, implore you, and down on our knees, beg of you — if you can find your way to contribute $25 or $50 or $100 or more… we will be in your debt. And more importantly, you will be making a difference to hundreds of kid’s lives — kids that didn’t do anything to deserve the fate handed to them.

Here is what you can do to help today:

Click on the graphic below, which takes you to the VVAF website. On the left side of the site is their PayPal account. Just contribute via there and we’ll keep track of how much we raise in that fashion.

Again, thank you for your help. Every little bit helps. I just clicked through and made another donation myself. If you can see fit to do the same before you scroll on down and hear more about my train mishaps, thank you.

Back to our regularly scheduled programming:

If you have been following along on the Ultimate Train Challenge website, either by looking at our fancy map there, or by just reading my latest post on the blog, you know that I have been taking the northern route to Jeannie and Nora’s southern plan. And you know that the last few days haven’t gone as planned for me.

In short, I pulled a muscle in my leg and could barely walk for a couple days, and worse, missed a train and had to take a bus for part of the way. O’ yea, and it turns out trains didn’t run on the route I wanted, so I needed to make an emergency stop to get a transit visa through a country I had no intention of going through. Go over to my post on the UTC website to get the full details of my mishaps and foibles.

I posted that up immediately  before I walked to the train station in Vilnius to catch the overnight train to Moscow. As I walked up to the station, I stopped at a vendor outside and bought a sandwich and a beer, paid for with almost my last Lithuanian litas left in my pocket.

I’m glad I still had 20 litas left over after I bought them. 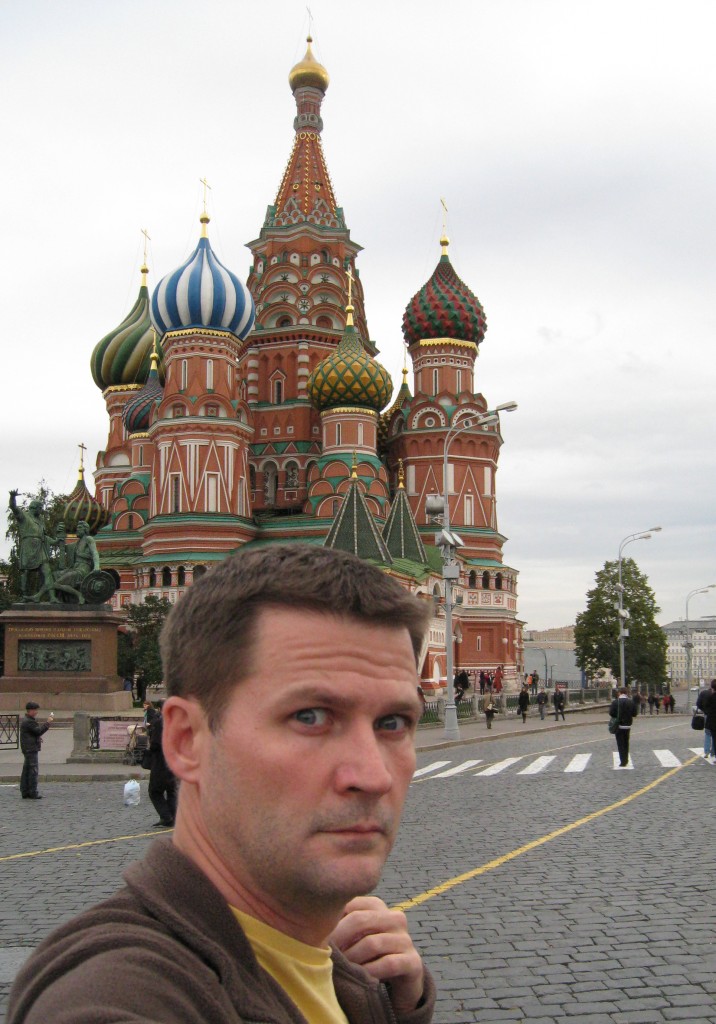 Crazy eyes from my last trip to Moscow... I think this was my expression yesterday

I sat down on a bench outside, ate my sandwich, drank a bit of my beer, and read from my Kindle, as I waited for them to open up the train doors and let us on the sleeper car. Up walked two Lithuanian policemen waving their fingers and me and saying something in a language I didn’t understand. I replied in English with a “I’m sorry, what?” and got back the reply “beer — no beer — no alcohol.”

As a former criminal defense attorney, I have a major aversion to cops.

Apparently, you can’t drink in a train station. Well, at least according to these two cops. The reason I say apparently is that it quickly took on the scent of a shake-down. They took me to their office at the station and extinguished their English with “pay us 50 Euros cash, or jail” and “no beer — no alcohol — 50 Euros” (as he pointed to the palm of his hand for emphasis).

Note the 50 Euros in every sentence.

Luckily I was almost cashed out at this point. I protested for about 3-4 minutes that I didn’t know it was illegal (amazing that drinking ANYWHERE is illegal in this part of the world, given what you see all over the place). I pointed out the stand that I bought the beer at, which was about 50 feet from their office. I throw out “U.S. Embassy” a few times.

But my train was scheduled to leave in about 15 minutes and I had already paid a pretty penny for that ticket, so I finally just pulled out all the money I had on me and threw it down on the table.

My first bribe and my first shake-down. All at once. I had been all the way through Africa and never had either happen (though I tried to bribe a border official multiple times in Ethiopia) and I got it in Lithuania. Sort of like my getting teargassed in Vancouver — not the country I would have bet on for this happening, especially because it is a EU country.

Just one day short of the mid-way point, the whole Ultimate Train Challenge was seeming more like a chore than something I was truly enjoying.

The events of the last 48 hours had worn me out. Being injured or sick is like kryptonite to travel happiness.

This was all compounded by the minor annoyance of the music from the cabin next to me on the train, shortly after we boarded. There was a Lithuanian basketball team on board (three of the kids were in my cabin) and they all were congregating next door for an impromptu karoyke session to the music from someone’s iPod pumping through some speakers.

There is nothing like the completely and totally dispassionate Slavic sounds of 4-5 guys singing — well, not singing really, just shouting along with the song — the quality rap lyrics:

I missed my $24 dollar beer. I really missed my beer.

It was as though the events of the last two days had stretched me thin on some medieval torture device and now I was being sonically flayed to death.

So, I did what I usually do in such occasions. I pulled out my iPod, plugged in my earbuds, picked out some great music (in this case, a 80s playlist) and sat back and relaxed. Fifteen or twenty minutes later, I looked out the train window at the approaching storm and saw the most perfect rainbow.

It started on one side of the train tracks, went right over the tracks, and down to the other side. It was absolutely perfect.

The arch of understanding sympathy.

It would all be better soon. And in the end, it was.

35 thoughts on “Mid-Point of the Ultimate Train Challenge, #UTC11 Update and Plea for Help”