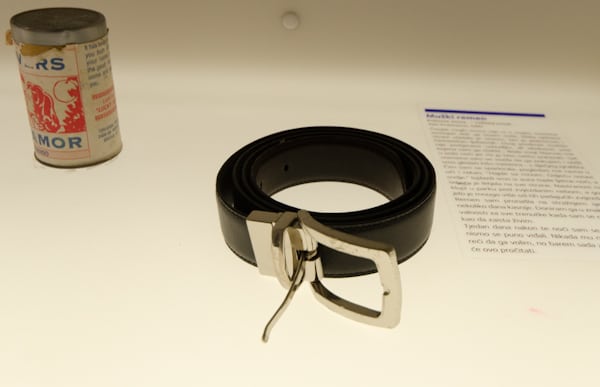 The man of my dreams didn’t even exist in my dreams until I met him. Our physical passion ruled the relationship; he was a unique and spectacular lover.

This item may not be very exciting, but the circumstances by which it came to my possession… oh my! He called me in the middle of the night because he had something he wanted me to see. I drove over an hour to pick him up and we went to watch a meteor shower… from a playground. The second I parked the car he looked me dead in the eye and said “Follow me. Leave your clothes.” We spilled out of the car into the warm summer night, articles of clothing flying everywhere. Kinkiness on a park bench underneath a blazing sky, there was more on fire than just those shooting stars.

I found the belt on the backseat of my car days later. I am donating it as a token of thanks for all the moments he made me feel alive. A week after that night I moved away and saw him little after that. I never got the chance to tell him that I love him, but at least everyone who reads this will know.

The Museum of Broken Relationships won the European Museum award in 2011 for most innovative new museum and it is easy to see why.

From poignant to humorous to heartbreaking to bitter, the full panoply of human emotions that love evokes are on display, in a format more expressive than almost anything I have ever felt – aside from going through it myself, of course.

It grew out of a travel exhibition and still tours around the world, currently in London until September 4th. The concept is simple: people donate some memento and its story to tell their personal tale of love, or love lost, or regret or joy from past relationships.

The museum is in the upper section of Zagreb, a few blocks away from the outdoor cafes where I was prone to enjoy a few beers and a cigar in the late afternoon. One day, I wandered up to take a look around and see if there were any good photography opportunities in the area. As I passed by the sign saying “Museum of Broken Relationships,” I walked in out of curiosity and bought my ticket on a lark, thinking it would likely be fodder for a funny post mocking it.

I walked out thinking it was the best museum I’d ever experienced.

Feel free to send them your mementos and story. I am certainly thinking about something in my storage shed that might be in the mail to them when I get home.

The words describing the items are those that sent them to the museum by their owners — there was no need for me to add anything else. 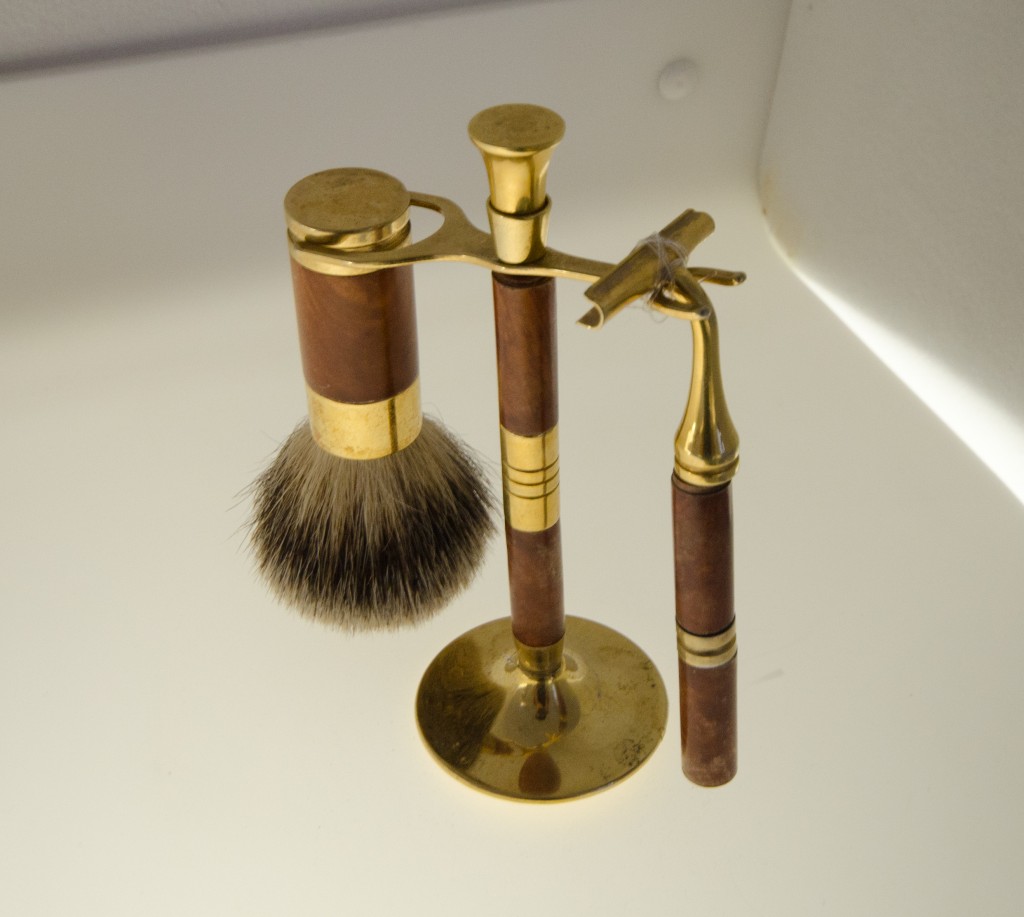 She bought me this shaving kit for my birthday. I haven’t used it for quite some time but I kept it as a memory of her.

Our love was passionate and we tried to break up a few times. She was 17 when we met; I was 27, married, with three children. We broke up after 10 years, but the love on my side is still as strong as it was back then. In the meantime she got married and had one daughter. I hope she doesn’t love me anymore. I hope she doesn’t know she was the ONLY person I ever loved. 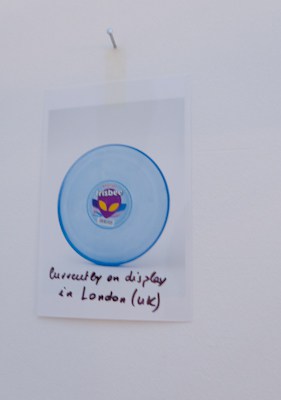 Description: a stupid Frisbee, brought in a thrift store, was my ex-boyfriend’s brilliant idea – as a second anniversary gift. The moral was obviously that he should be smacked with it in the middle of his face the next time he gets such a fantastic idea. Since the relationship is now preceded by the word “ex,” the Frisbee remains in the Museum as a nice memory and expelled negative energy. Feel free to borrow it if you like.

PS Darling, should you ever get a ridiculous idea to walk into a cultural institution like a museum for the first time in your life, you will remember me. At least have a good laugh (the only thing you could do on your own). 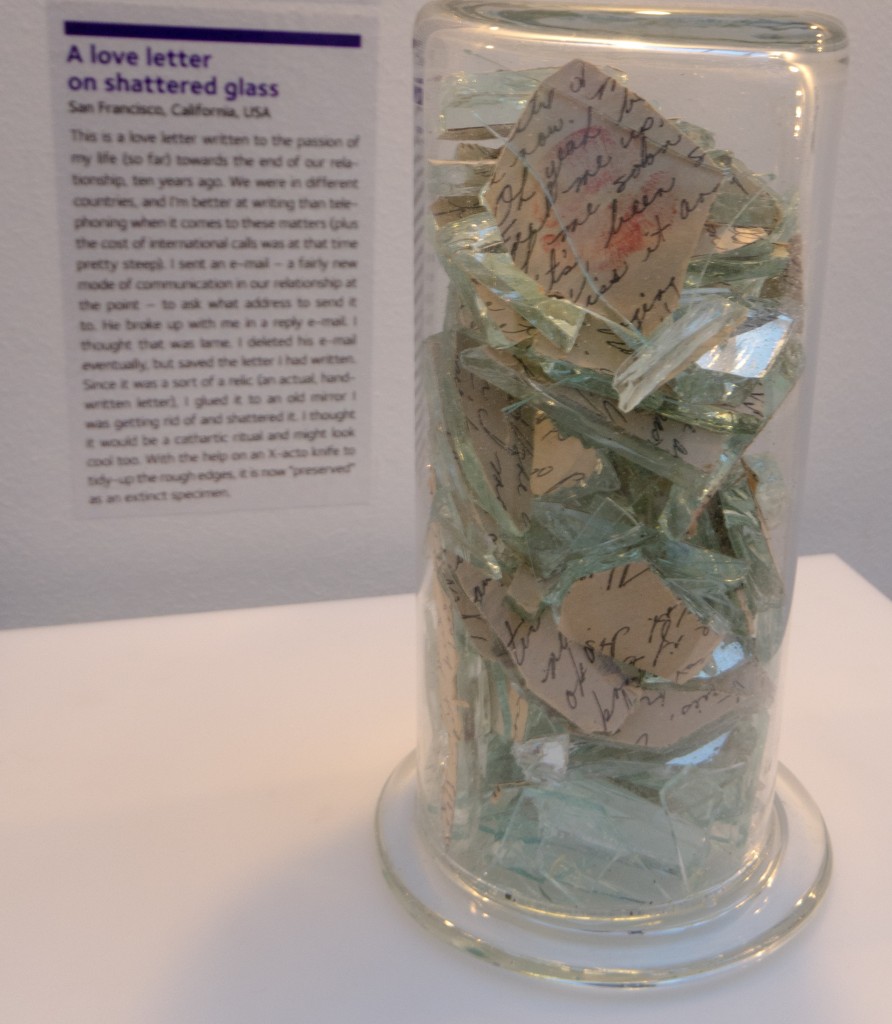 A love letter on shattered glass

This is a love letter written to the passion of my life (so far) towards the end of our relationship, ten years ago. We were in different countries, and I’m better at writing than telephoning when it comes to these matters (plus the cost of international calls was at that time pretty steep). I sent an e-mail – a fairly new mode of communication in our relationship at the point – to ask what address to send it to. He broke up with me in a reply e-mail. I thought that was lame. I deleted his e-mail eventually, but saved the letter I had written. Since it was sort of a relic (an actual, handwritten letter), I glued it to an old mirror I was getting rid of and shattered it. I thought it would be a cathartic ritual and might look cool too. With the help of an X-acto knife to tidy-up the rough edges, it is now “preserved” as an extinct specimen. 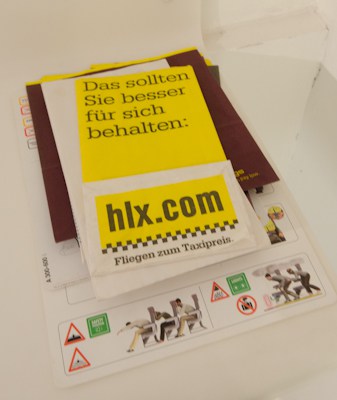 A range of air sickness bags as a memento of a long-distance relationship. One Croatia Airlines, one Lufthansa, one Hapag Lloyd Express and three GermanWings. I think I still have those illustrated safety instructions as well, showing what to do when the airplane begins to fall apart. I have never found any instructions on what to do when a relationship begins to fall apart, but at least I’ve still got these bags. 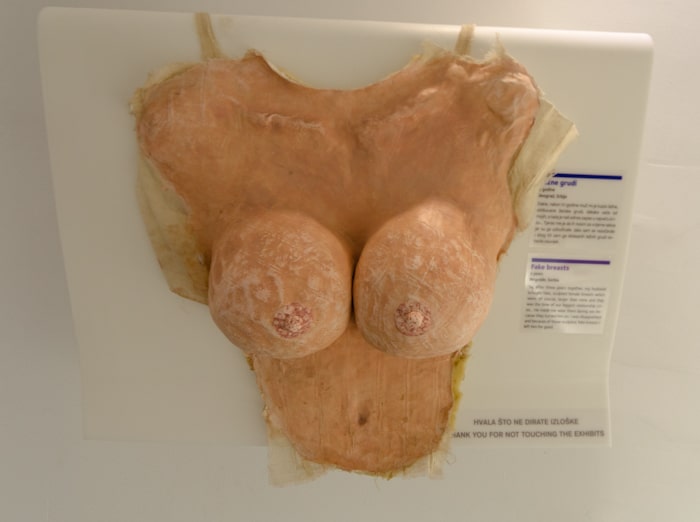 So, after three years together, my husband bought fake sculpted female breasts which were, of course, larger than mine and that was the time of our biggest relationship crisis… He made me wear them during sex because they turned him on. I was disappointed and because of those sculpted, fake breasts I left him for good. 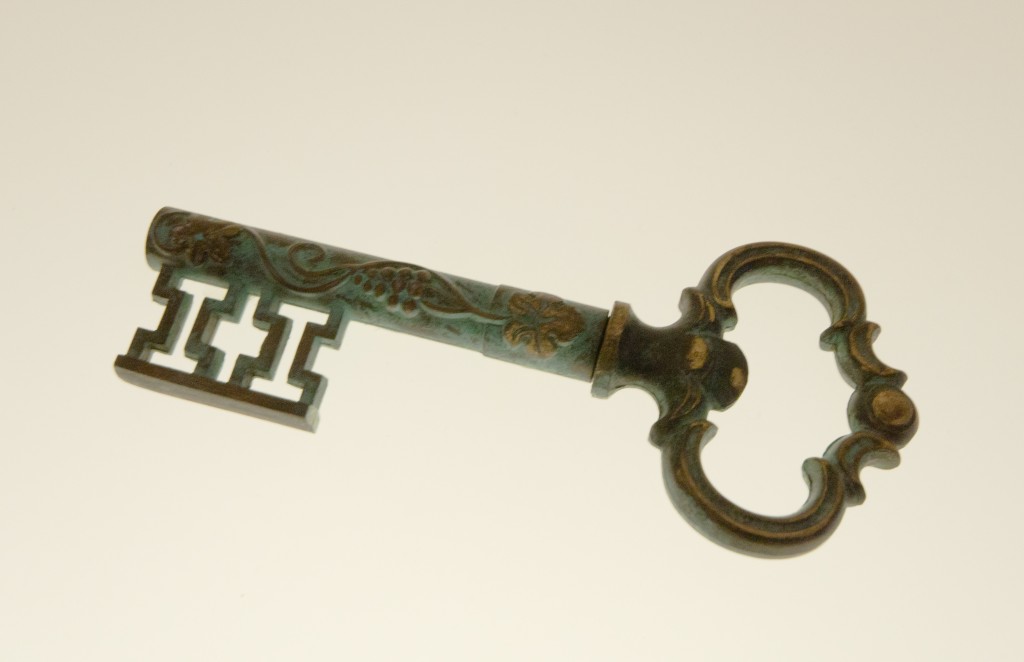 You talked to me of love, gave me small gifts every day; this is just one of them. They key to the heart. You turned my head; you just did not want to sleep with me. I realized how much you loved me only after you died of AIDS. 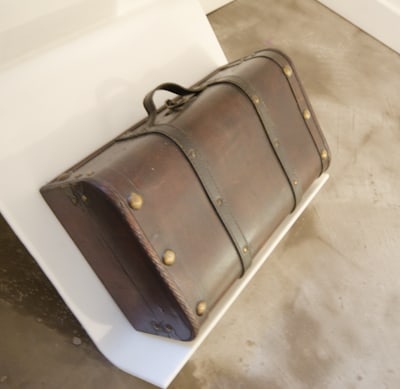 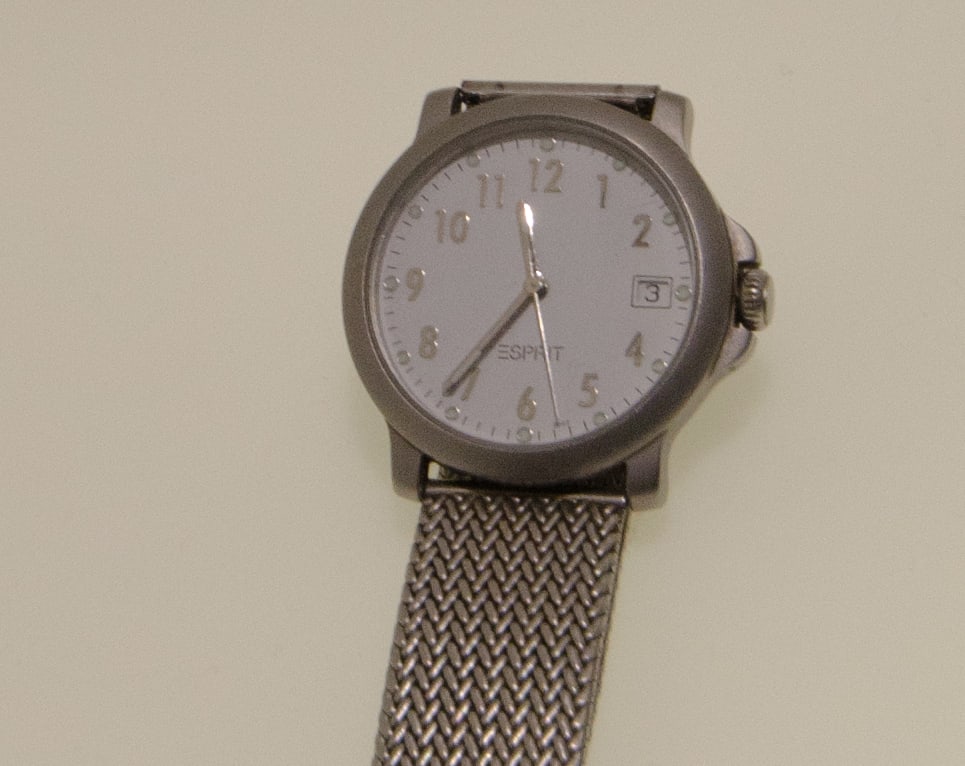 The first time my ex told me he loved me, he took off my watch and pulled the pin out to mark the time he said it. After that I could never bring myself to push it back in or wear it again. But had I known then that he was really only ever going to steal my time, I would have pushed it back in and walked away instead of waiting too many years for my life to start again. 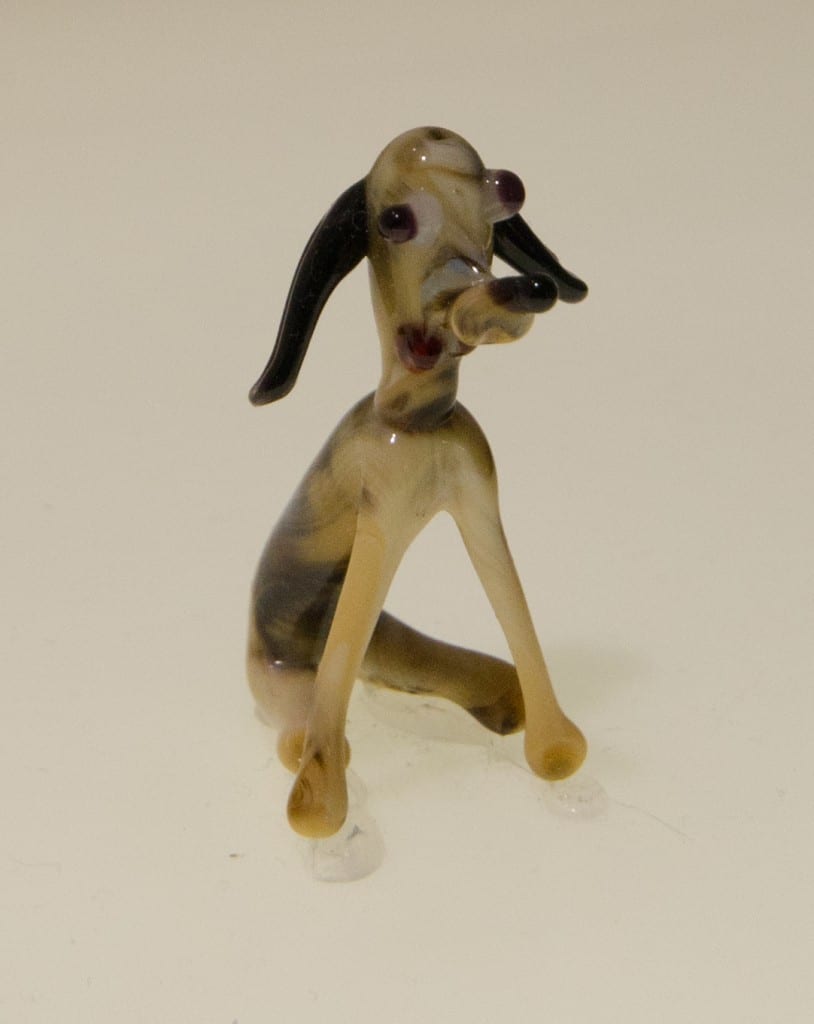 A great love from the Second Gymnasium in Belgrade, from the times of student protest in 1968. We lasted for ten years. I got married and we broke up. Then he got married. I travelled all over the world and renewed our relationship at the prom dinner a few months ago. This time the relationship didn’t last longer because he did not have the energy for double relationships. Our youth took us back powerfully and dynamically. Both of us realized we should have stayed together and got married because we were made for each other. But, again, we did not have the courage. I give you my puppy as a token of my long lost love and my wish that others will have more courage to follow their hearts, without being as weak as I was.

The Museum of Broken Relationships: A rare find in Zagreb

You should, you shouldn´t, and it must go away