I would have never thought that a visit to the Berlin Music Festival would be one of the more emotional experiences I have had in quite a long time, but as I came through the terminal entrance of the Berlin Tempelhof Airport, on my way to the runway side of the building, I started choking up a little bit.

Frankly, as I sit here now remembering and writing, I am getting a little misty.

Berlin Tempelhof Airport is the site of one of the truly amazing and inspirational feats of the last half of the 20th century — the Berlin Airlift. 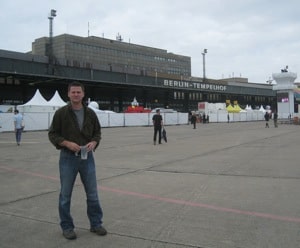 On June 20, 1948, the Soviet Union began the Berlin Blockade, an effort to drive the Western allies (U.S., U.K. and France) out of the three sectors of Berlin occupied by those three. Since Berlin was deep in the middle of the sector of Germany controlled by the Soviets, the effect of blocking the road from the rest of Germany to Western Berlin meant that the allies either had to give up the city or fly in all the necessities of life for the two and half million residents of the city.

We chose the latter.

For eleven months, the allies (mainly the U.K. and the U.S., but supported by numerous other countries) flew over 200,000 flights into the city and delivered an average of 4,700 tons of material daily. They needed to provide everything: food, coal, water, milk, clothing, military supplies — just think about all the things that two and a half million people would need to have to survive on for a year.

The logistical effort was truly mind boggling. The schedule was such that a plane either took off or landed every three minutes. Every day. For eleven months.

When America Stood for All That is Good

During these days, when large numbers of people in the United States think that government can do nothing right and that acting communally is considered socialistic or worse, I long for days in our not-too-distant past when most everyone realized that we could do some great things when we acted together.

This wasn’t a case of just going off and bombing something (the one government effort that does seem to get support these days), but of a purely humanitarian effort, done in order to save two and a half million people from falling subject to the oppression of the Soviet hegemony.

Frankly, my country has screwed a lot up around the world in the last few decades — and I get to hear about it all the time from people around the world as I travel. But as an American standing there in the shadows of the immense Tempelhof terminal, I welled up with a little pride of a time when America was the preeminent force for good in the world.

I miss those days. 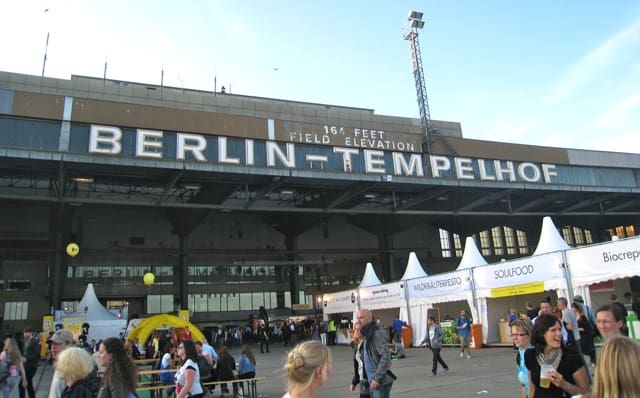 even in the shadows of concession stands, it moved me

The juxtaposition of a vibrant music and art festival with my melancholy feelings made for a bit of an odd day, but one I will not soon forget.

This was about the mid-way point of the Ultimate Train Challenge. The easy part, Europe travel via the wonderful sponsorship of Eurail.com, was to end in just a couple days. Then I was meeting up with Nora and Jeannie for the last 15 days of pretty constant train travel. Those days were amazing, as were the ones leading to this one, but this might have been the single most poignant moment on my 30-day jaunt of train craziness. 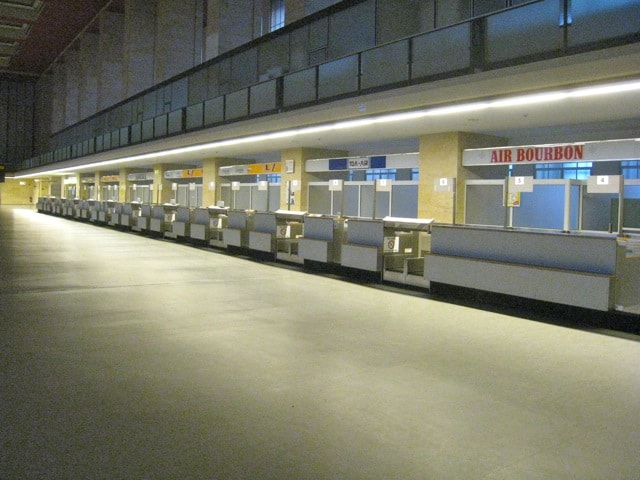 the empty counters were eerie 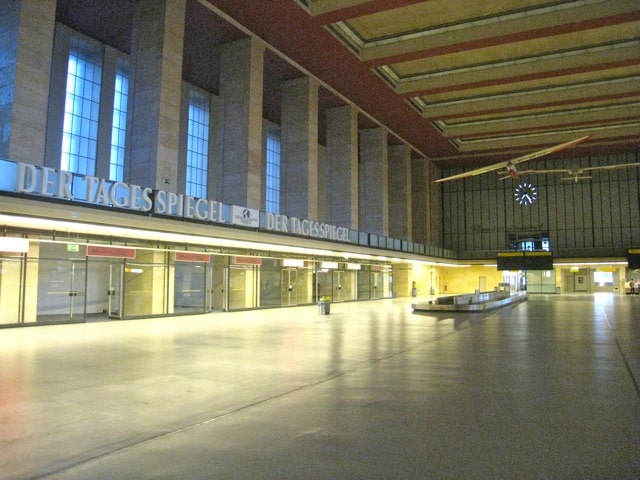 “You may collect your bags at Terminal 2”

And because there actually was a lot more going on that just me getting all sappy and emotional about an airport, wouldn’t it be nice if I showed just a few pics of the actual festival that was the reason we were there in the first place?

The Berlin Music Festival was happening on a couple different stages, underneath the terminal roof. In addition to the musical acts that were playing for two full days on stage, there were other live art performances there, including some great live graffiti artwork.

I was there because the amazing and talented Yvonne of Just Travelous (talented meaning not only a wonderful blogger, but one that has a blog in her native German…. and English), managed to score a couple passes from the Berlin Tourism Board for the event. And I was lucky enough to be around when she got them and did the appropriate groveling to be permitted to tag along. Plus, I think I offered to buy drinks or something of the sort. 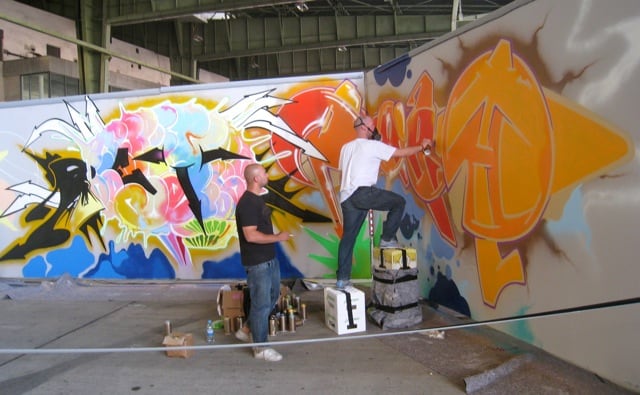 there was a fascinating area where artists were doing live art 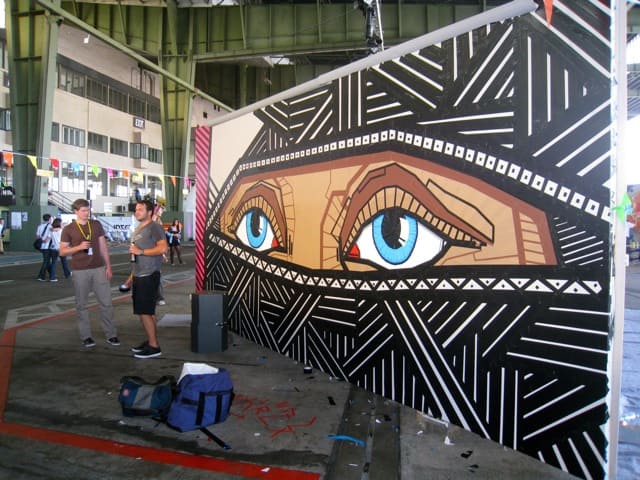 the eyes of the world are on you… well, ok, maybe just the artist’s rendering 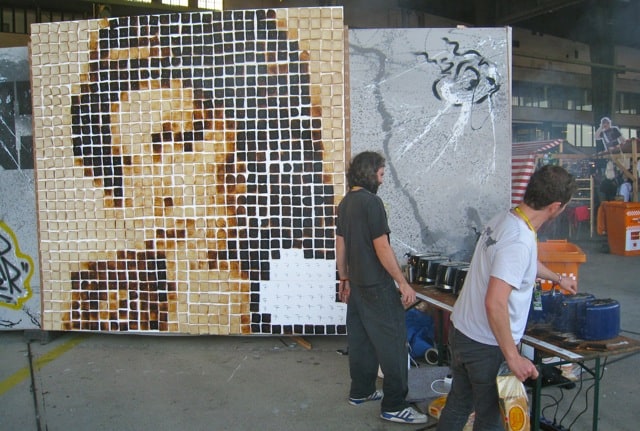 Yes, he is doing a portrait… out of burnt toast 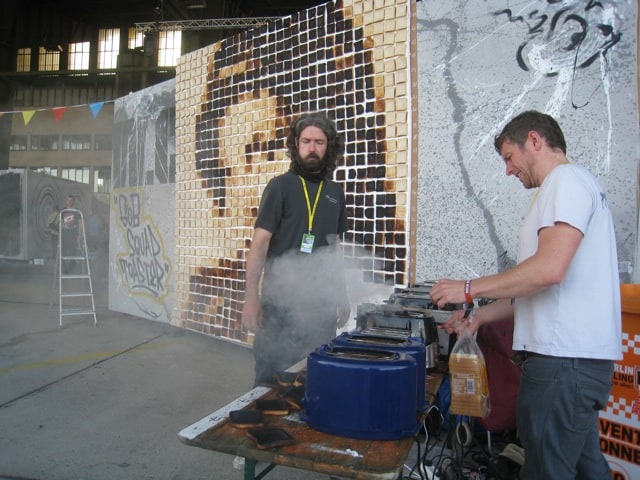 I told you. Jeez, you might believe me next time. 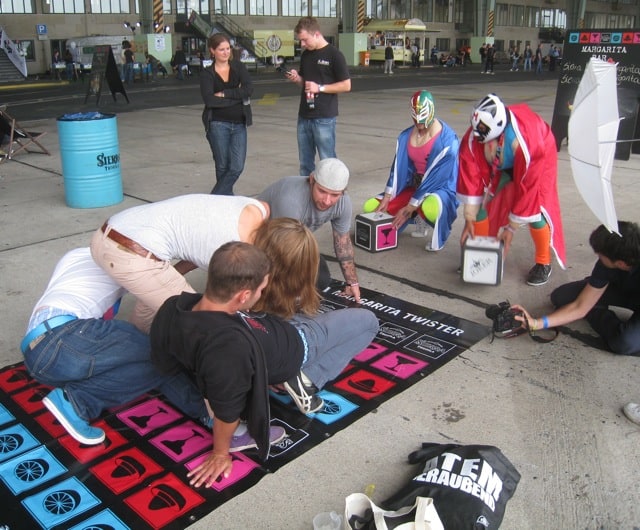 See the two guys dressed in costume? They are in charge. There was liquor involved.