The variety of my lodgings in the last few years has varied from the worst hotel in the world to one of the nicest near the Dead Sea. I like to think that I can handle about anything the world throws at me, at least in the travel realm.

But given the choice, I’m perfectly happy being the lapdog drooling on the face of five-star luxury.

On the first day of my trip to South Tyrol, I found myself at Adler Spa Resorts in Ortisei, which is a very pleasant forty-minute drive from Bolzano through two of the famous valleys in this region. Due to their generosity, I got to spend three completely and totally relaxing nights there, including use of their spa facilities and a couple great massages. Before I hopped on the first of four trains to get me from London to Bolzano, I told myself that I deserved a good year-end spate of sublime relaxation.

I’m not sure I deserved this much sublimeness though.

This place made me feel a little like James Bond. And not any ole’ James Bond — the only James Bond that was 007 just one time, George Lazenby.

On Her Majesty’s Secret Service was the sixth Bond movie, and the first without Sean Connery (who would actually come back in the next one,Diamonds Are Forever, for his last appearance in the role). There was an entire part of that movie, filmed in Switzerland just to be clear, where Bond was staying in Blofeld’s mountain lair of wellness and happiness.

The Adler is built into the side of a mountain and as I walked around the many corridors taking y0u between the lobby area, the restaurant and bar area, the spa area(s), the pools and the different areas containing rooms, it just had that feel of a perfectly designed mountain lair.

Well, except for the evil villain trying to take over the world and the beautiful woman sneaking into my room, of course.

I knew I should have used my fake James Bond ID. 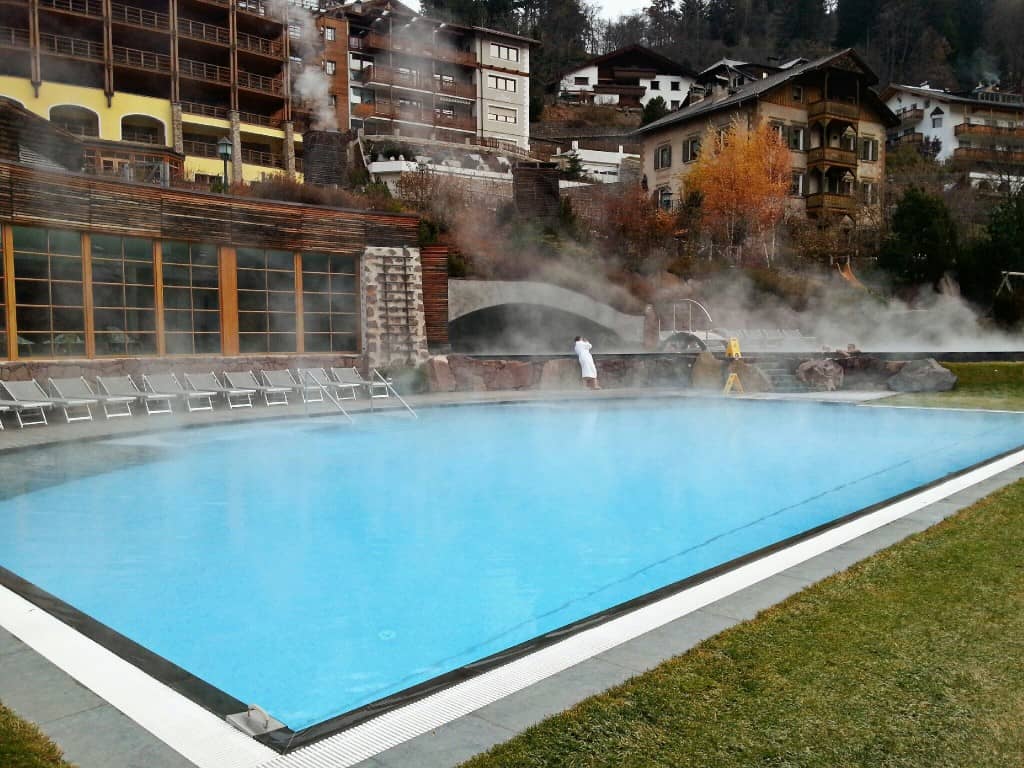 The Hotel Alder was both massive and subtle, in that it was not only built into the side of the mountain but also and around a couple buildings in town. The residential area that I stayed in had a separate elevator down to the outside and the first time I exited there, I almost got lost, since it was so far away from the entrance to the hotel I’d gone into the day before.

Its an impressive place in scope and also in the seriousness that it takes its wellness mandate.

At its heart, this is a hotel that is centered around the concept of wellness, which is very important in South Tyrol. There are scores of different options available here to pamper, purge, and revitalize your body, including massage, saunas, hot tubs, relaxation areas, multiple heated pools, therapeutic treatments, mud packs, ayurvedic treatments and more.

Almost too many options to choose from, here’s a link to their various wellness options. 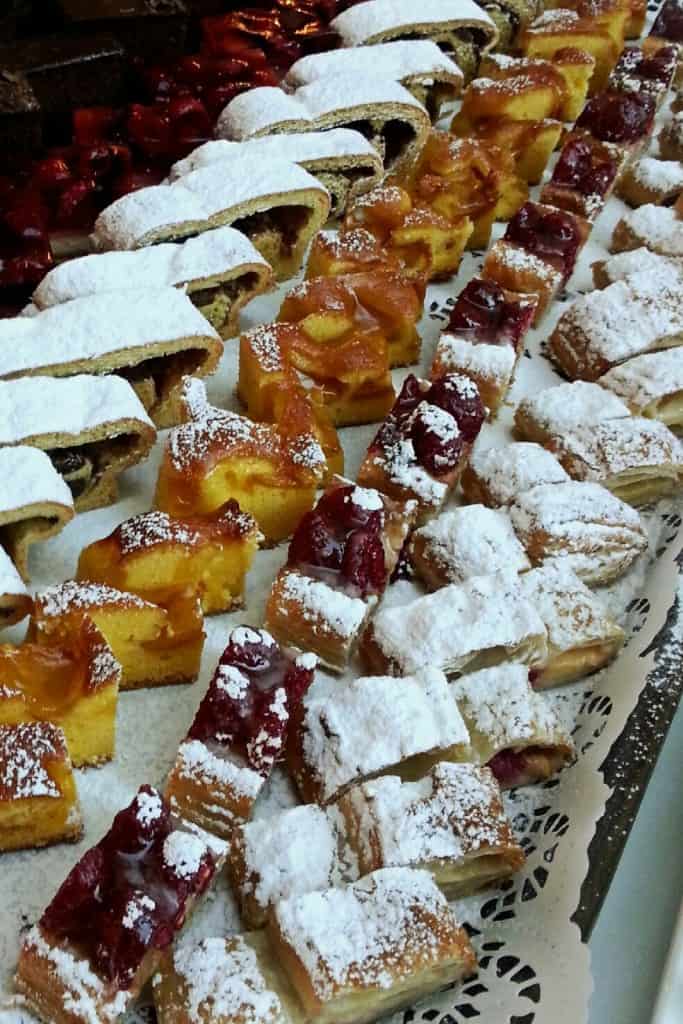 part (only part) of the free, daily afternoon dessert table

I have never been much of a food photo fan, but the ease of being able to pull my phone out, instead of my bulky DSLR, and snap a couple quick photos prior to digging in has slightly converted me to at least adding a few food photos to my resume.

It helped that I ended each night seated at the same table in the restaurant with the same name tag every night, which made me feel much more honorable than I am in reality… 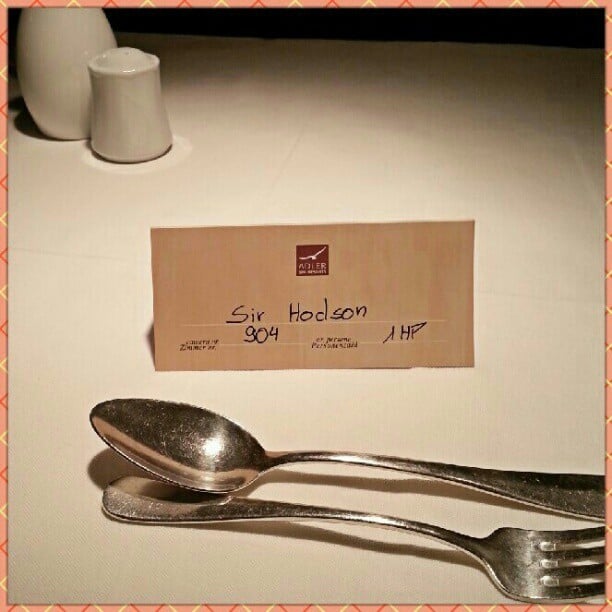 My evening food routine was the highlight of my day. I took my most honored seat, then ordered off the fixed priced menu with different options daily. Got a bottle of local red wine. Grazed a bit from the smorgasbord of options at the buffet, then to my ordered food, and about half of that bottle of excellent wine.

Then I’d finish up, take the remainder of the the bottle of wine up to the bar area, where they had a very hot heat lamp outside under which I’d smoke my nightly cigar.

Perhaps not the kind of wellness that they intended here, but worked well for me. 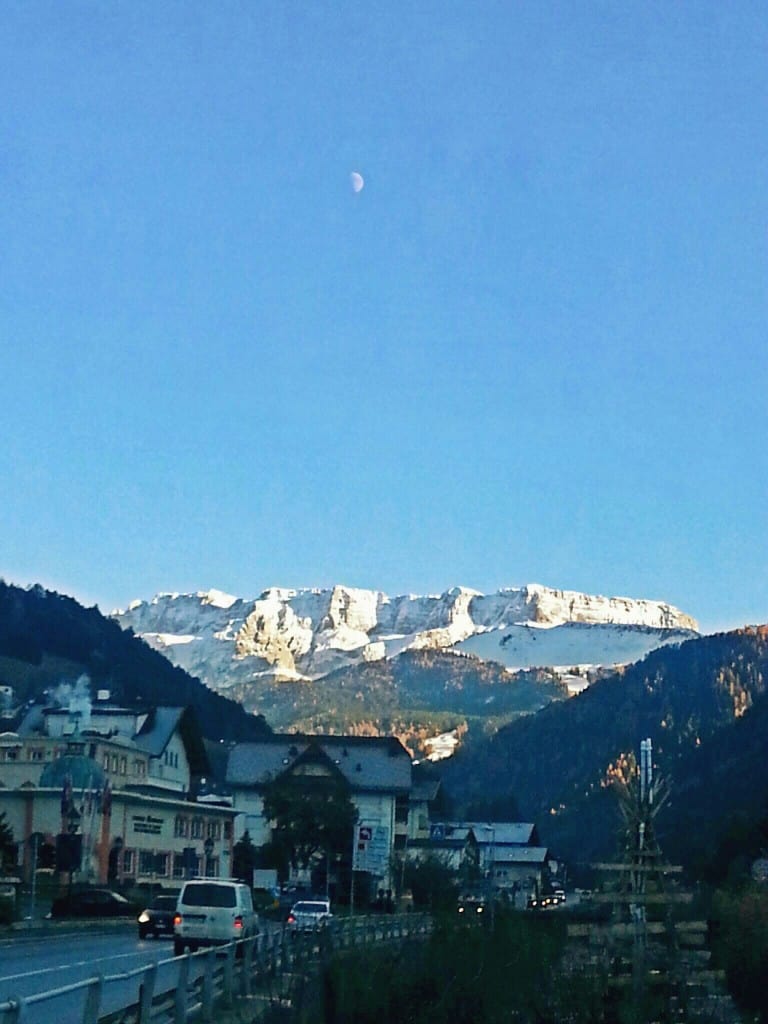 the view of the Dolomites, plus early Moon rising, from town

Everyone in South Tyrol I met told me the same thing right off the bat: “November is the worst month to visit South Tyrol.” It’s the month that a lot of people here take off. Many of the hotels and restaurants are closed down. It’s the period after the vibrant Autumn colors have faded and prior to the opening of ski season.

All I can say is that if this is the worst month to visit — I’ll be back plenty of times in the future. I can’t wait to see this place in a better time. I was fully impressed as is.

Summertime at Hotel Adler (from their website, since I was there in November)

Given the chance in recent weeks to do a little traveling on behalf of Samsung, to test out their Galaxy SIII phone in the field and see if I could recommend it as a good tool for travel. Bottom line: the phone has been a revelation and great addition to my traveling-tech backpack.

Thanks to Samsung for sponsoring a few of my activities recently in South Tyrol and gifting me a Samsung Galaxy SIII. All views expressed here are my own honest opinions, and do not reflect the views of Samsung, the South Tyrol Tourism Board, or Adler Spa Resorts. Honestly take a look at those photos… how could I NOT love it?

What do you want in a luxury hotel?