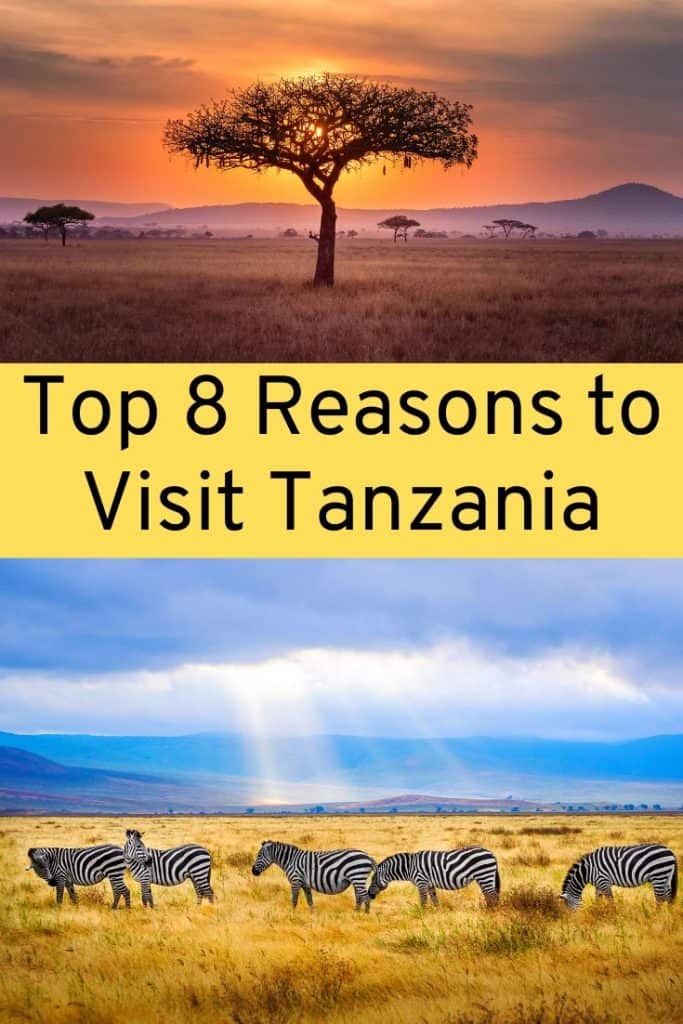 A couple of days ago, I was thinking about why I decided to go to Africa in the first place. I mean, it’s not the obvious choice for your first ever solo trip is it? So here are 8 of the best things to do in Tanzania.

Tanzania was the reason. I wanted to go to Tanzania! I found it fascinating. For me, it epitomized the image of Africa – Kilimanjaro, beaches, safaris, it had it all.

Back in 2008, around the same time as I decided I wanted to take some time out to travel, I started sponsoring a little girl who lived there. Soon an idea began to form: I would visit her and explore the country. The rest of my Africa plans just developed from there.

And I’ll let on to a little secret… Tanzania is every bit as great as they say. Really. If it isn’t on your travel radar, hopefully it will be after I tell you about a few of my favourite places!

The Live Version of the Lion King in the Serengeti

No ideal Tanzania itinerary would be complete without a trip to the spectacular Serengeti, home to pretty much every animal you could hope to see on a safari. The Serengeti is adjacent to the Masai Mara in Kenya, and if you’re lucky, the annual wildebeest migration will be passing through in time with your visit. It really is a live version of The Lion King!

Be prepared though. We’d been happily watching a giraffe family – mummy, daddy and baby giraffe – chilling out on the open plains before driving away to look for some elephants. After driving for around 5 minutes, the radio buzzed and another guide told us to come back to where we just were. We did a quick turnaround and when we got there, baby was no more. She was lunch for a pride of lions, mummy and daddy giraffe watched sadly from a distance, whilst a hyena waited patiently for the scraps, and behind him was a jackal waiting for his turn. It’s the ‘Circle of Life’… or something like that.

Whether you’re looking for a top end safari lodge, or a very rustic camping experience, you can find it all in the Serengeti. Either way, you’re likely to be lulled to sleep by lions roaring in the distance. If you’re camping, just remember to shine your torch around and look for eyes before you get out of your tent! The Big Five are all in the Serengeti.

Visit an Elephant Retirement Home at the Ngorongoro Crater

On your trip to the Serengeti, I suggest you tag on a visit to the Ngorongoro Conservation Area, a huge, collapsed volcano. The landscape is stunning, especially from the top looking in. 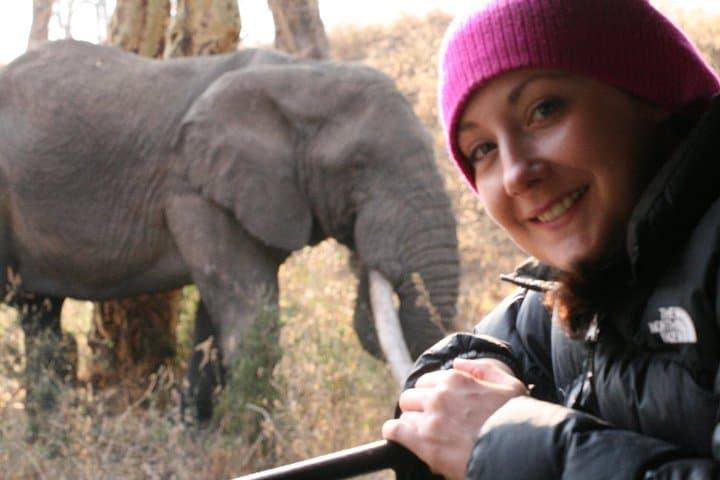 Inside there is an abundance of wildlife. We saw hyenas, (endangered) black rhino, hippo, lions, cheetahs, but most of all elephants. Old bull elephants. Ok, so it’s not an actual retirement home but Ngorongoro is unique in that the elephants are all older bulls. It’s as if they have thrown up their trunks and said “I’m done with all that competing, I just wanna live out the rest of my life in peace, munchin’ on some trees.” They have a strange calmness that you don’t see in many elephants elsewhere. But you really need to go to experience it!

My highlights included seeing a herd of zebra accidentally running into camp whilst we were having dinner and an elephant stopping by the camp, too. Both caused quite a stir!

Climb to the Roof of Africa

In July 2009, I set about my biggest challenge to date (and still to this day) – climbing Kilimanjaro. Those six days, were probably the best and worst days of my entire life. I’ve never been so sick, hungry or tired, whilst at the same time feeling totally at peace and alive. The physical challenge was immense – I lost around a stone in weight – but the mental challenge was harder. Perhaps more so because I climbed alone. I had a guide and porters, but no other first-timers to share the experience with. This also meant I had no-one to moan to either; I just had to suck it up and get on with it! 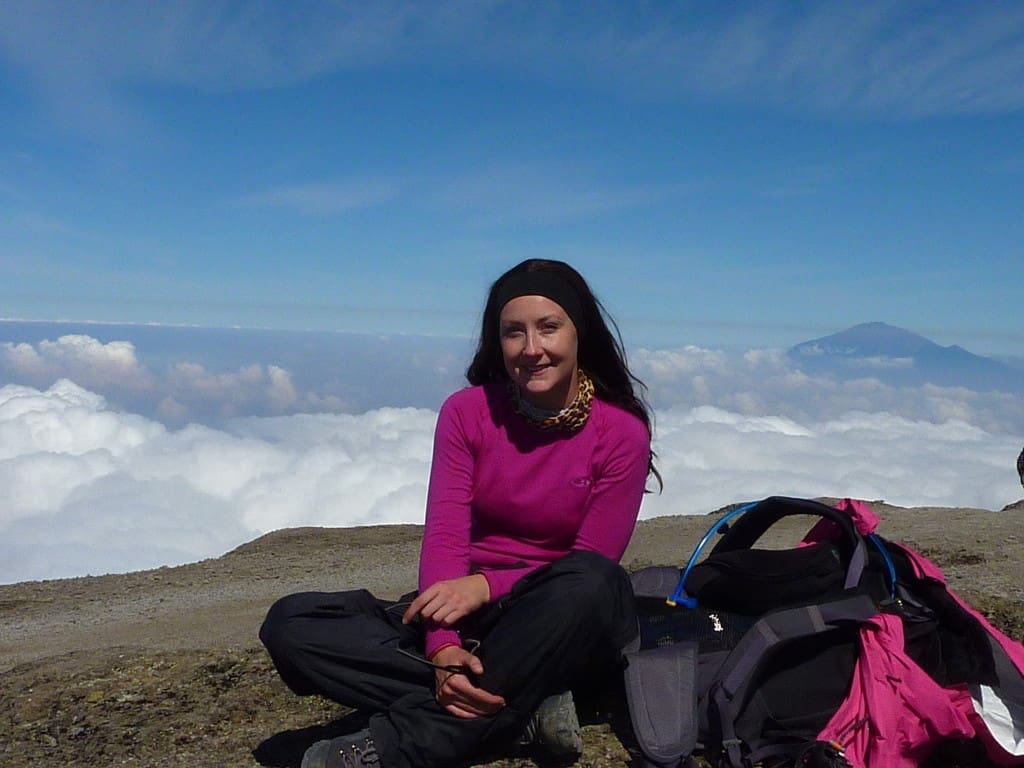 I chose the Machame Route. Starting off in the rainforest, you will make your way ‘pole pole’ (slowly) upwards, one small step at at time. The landscape changes dramatically over the course of the mountain, and the closer you get to the top, the more it feels like you are on another planet. Strange trees and plants appear and then give way to volcanic rock and glacier. From day two we were above the clouds, a strange limbo between heaven and the earth (or hell depending on how the altitude sickness is coming along)!

I still don’t quite understand how I made it to the top, but I did. Pure stubbornness maybe? Believe me, if you are looking for the experience of a lifetime, climb to the ‘Roof of Africa’!

Even the name makes me excited! Zanzibar, known as the Spice Island, is a former slave hub. It’s an intriguing place, full of history and sorrow but still so vibrant and magical. Spend at least one night in Stone Town, more if you can. You’ll wake up to the beautiful sounds of the call to prayer early in the morning before wandering the streets, admiring the architecture and beautiful doorways. You’ll get completely lost, but that’s half the fun. 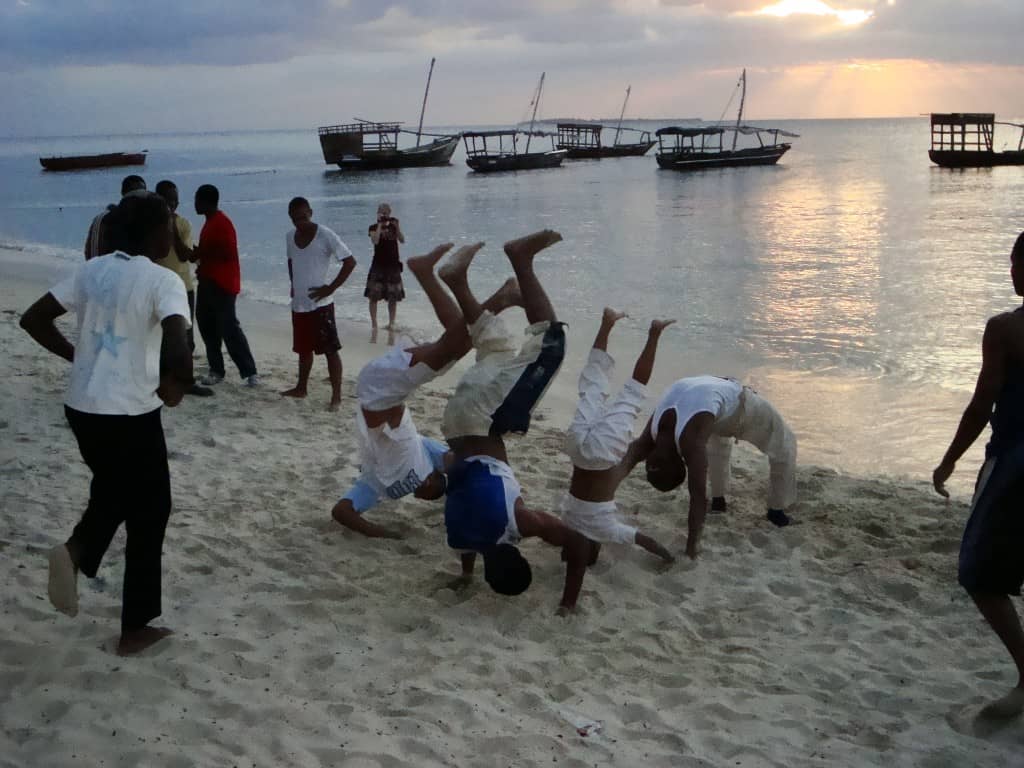 Take a Spice Tour and visit the old Slave Market. Just before sunset, take a trip to the Africa House for cocktails and then head to the Livingstone Bar and Restaurant and watch the boys do capoeira on the beach. Walk along the seafront, and if you’re feeling mischievous join in with the ‘fun’. At night there’s the food market, something you do not want to miss!

Be sure to visit the beaches of Nungwe and Kendwa. Nungwe is a little quieter and the perfect place for a romantic dinner on the beach. Kendwa is the place for dancing the night away to reggae music with the Maasai and the Rastas. 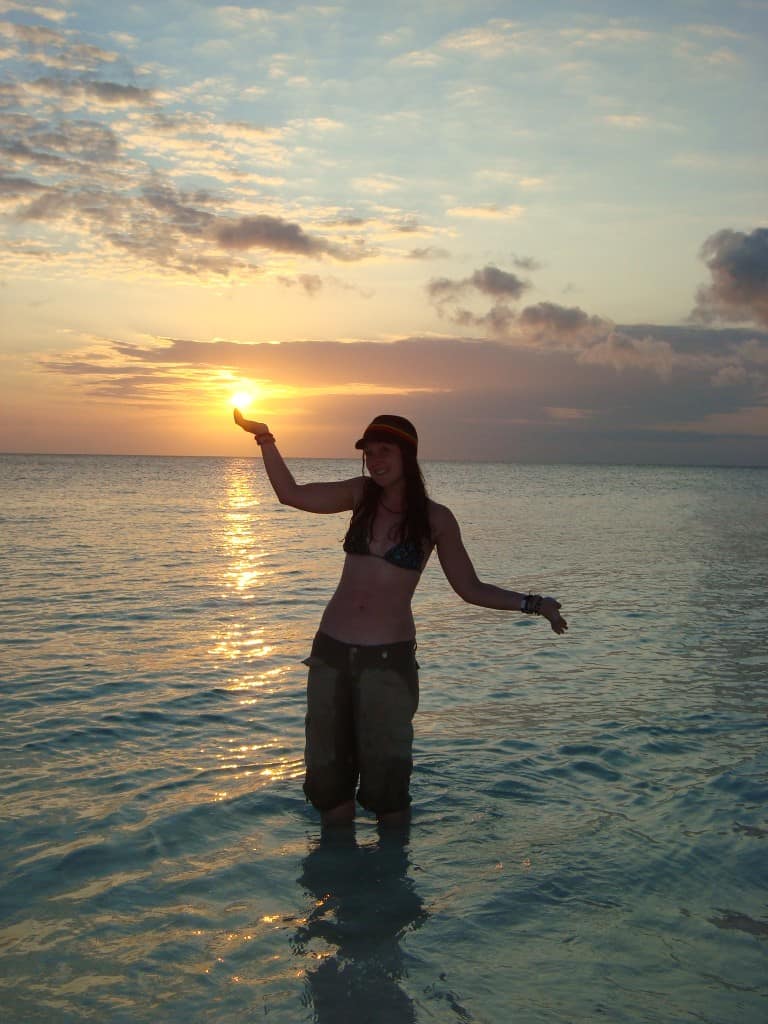 Visit the Old Capital of Bagamoyo

I spent most of my time in Tanzania living in the coastal town of Bagamoyo, an hour north of Dar es Salaam. I was volunteering at the Baobab Home, running a summer school for the children who live in an around the home. 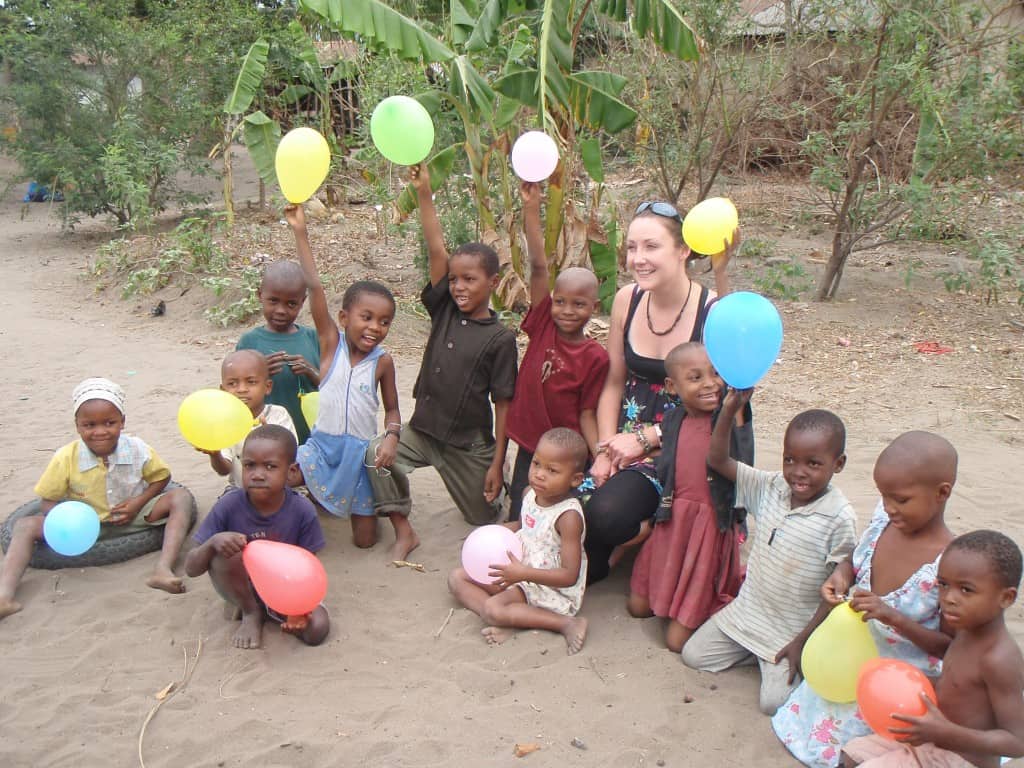 Each morning I would get up at sunrise and run (ok, I mostly walked) along the beach and watch the sun come up over the Indian Ocean.

Bagamoyo is steeped in history, but a place that tourists rarely visit. In the 19th century, it was an important hub in the slave and ivory trade, due to it’s position opposite Zanzibar. The word Bagamoyo actually means ‘lay down your heart’ – a sad tribute to the slaves who passed through or died there. If you go, visit the Bagamoyo Museum and the Kaole Ruins. 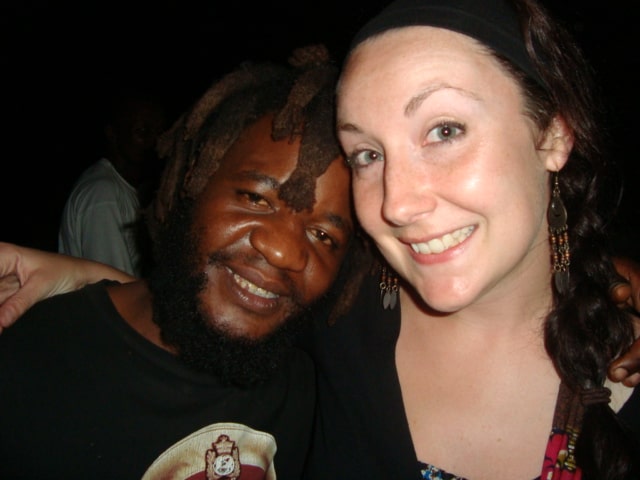 Nowadays, Bagamoyo is mostly known for being a fishing village, as well as a place where dhow boats (traditional African sail boats) are made. It also has an amazing arts scene, with the Bagamoyo College of Arts. They hold classes as well as lots of concerts. I watched the Miss Tanzania competition here, as well as attended my first reggae concert. Bagamoyo has a a large Rastafarian population, some who became good friends during my time there. My friend Rasti, a very talented painter who runs art classes, showed me how to make coconut rice and beans from scratch, and Lumilezi, another artist, taught me how to dance to reggae properly! Rastas rock!

Take the Tazara Train to Zambia

Taking the Tazara train is one of best ways to travel across Africa. The two-day train ride, is far from luxurious, but it is an epic adventure! From the window of your cabin, you can take in the magnificent views and watch the scenery change from green and hilly in Tanzania, to flat and golden in Zambia. 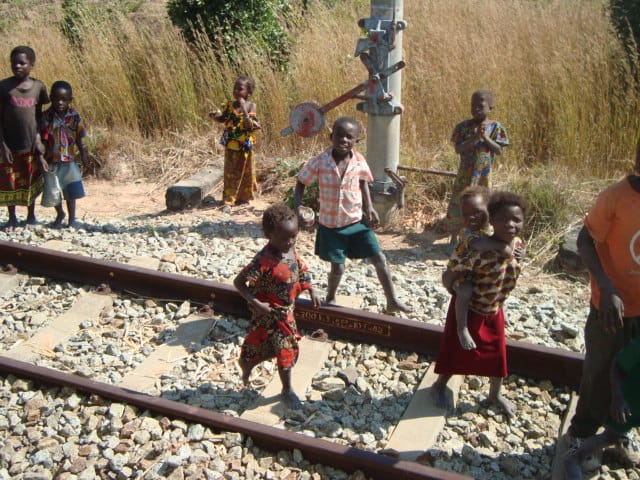 The tracks are lined with people, coming to watch the train pass or to sell bananas, water, SIM cards and a whole host of other things when the train is still. One of my favorite things to do when we stopped was hop off the train and go and have a chat with anyone who wanted to. I was coming the other way, from Zambia, so I was practicing my Swahili before I arrived in Tanzania. My mispronunciation caused quite a few giggles. Just remember to be flexible – my train arrived 24 hours late!

I’ve written about this before, but Tanzania is the place where I’ve seen some spectacular sunrises, and sunsets! With its position on the Indian Ocean, watching the sunrise from either the coast of mainland Tanzania or from Zanzibar is always a treat! Especially when you get that moment when a traditional dhow boat sails past in perfect silhouette. 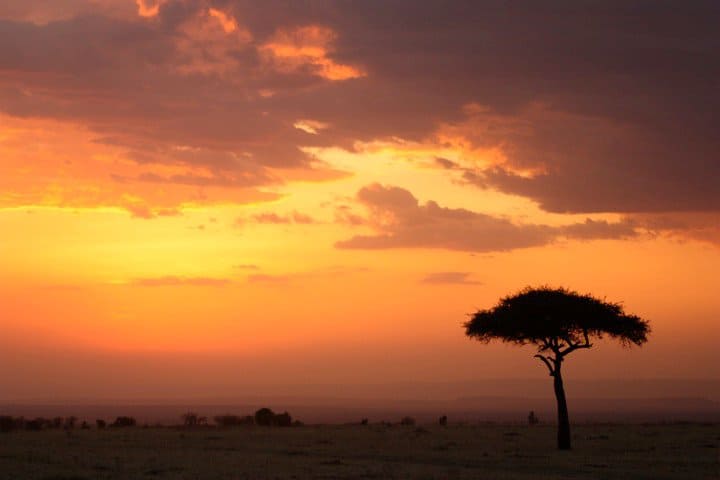 As for the sunsets, well, the best best place to see one of those is in the Serengeti. Due to the sheer size of the place, there is literally nothing around for miles and miles. You know that iconic African image – a sunset, an animal or two and a lone acacia tree? Well, the Serengeti is the place you’ll see that!

Oh the food! I love Tanzanian food! It’s a real mix of traditional African food, with a strong Arabic/Indian influence, especially along the coast and in Zanzibar.

In Bagamoyo, my diet mostly consisted of fruit for breakfast, samosas, chapatis or mandazis (like a donut) for lunch, and rice and beans or plantain with a small portion of meat stew for dinner. I’d buy these from the metal container restaurant next to my house. One night we went out to a proper restaurant for dinner (below). All that was on the menu? More rice and beans! Still to this day, every now and again, I get a mad craving for rice and beans – although when I left, I never wanted to see a plate of rice and beans again. 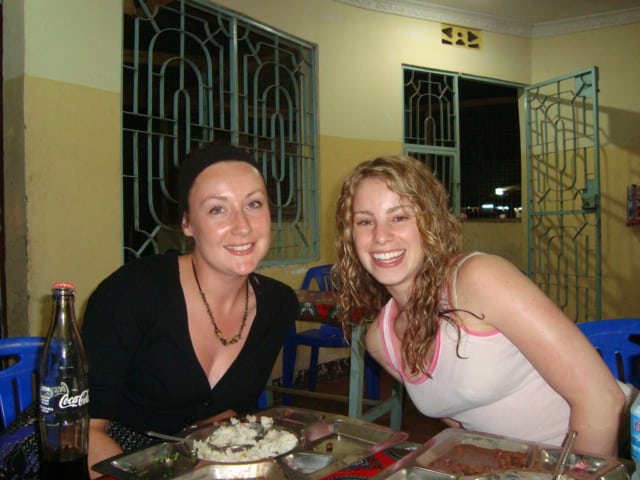 On the coast and in Zanzibar, fish is widely available. We sometimes walked down to the beach and bought red snapper straight from the boats. In Dar es Salaam, there are a couple of big fish markets. Ugali is another popular food, as it is all around Africa. Ugali is a thick maize porridge (resembling mashed potato), which is usually served with a relish and occasionally meat. One of my favourite foods was chipsi mayai, which is basically a chip (french fries) omelette. 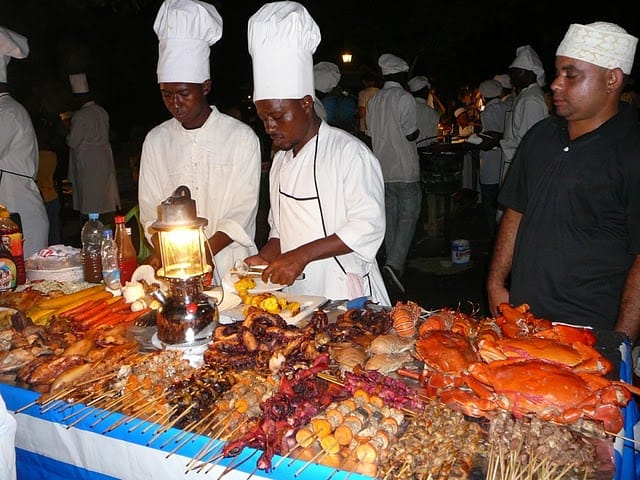 The Stone Town Food Market is the place to go for a massive selection though!

I’m a massive tea drinker, but we didn’t have a fridge and milk is not widely available anyway, so I switched to drinking delicious chai. In terms of alcohol, Konyagi (like a gin/vodka) in plastic bags was my poison of choice, usually mixed with a still Fanta (yeah, I don’t know why either) or a Mirinda soda. I’m also quite partial to a Kilimanjaro beer!

So, there you have it! Some of my top Tanzanian experiences!

Have you been? Do you want to go? 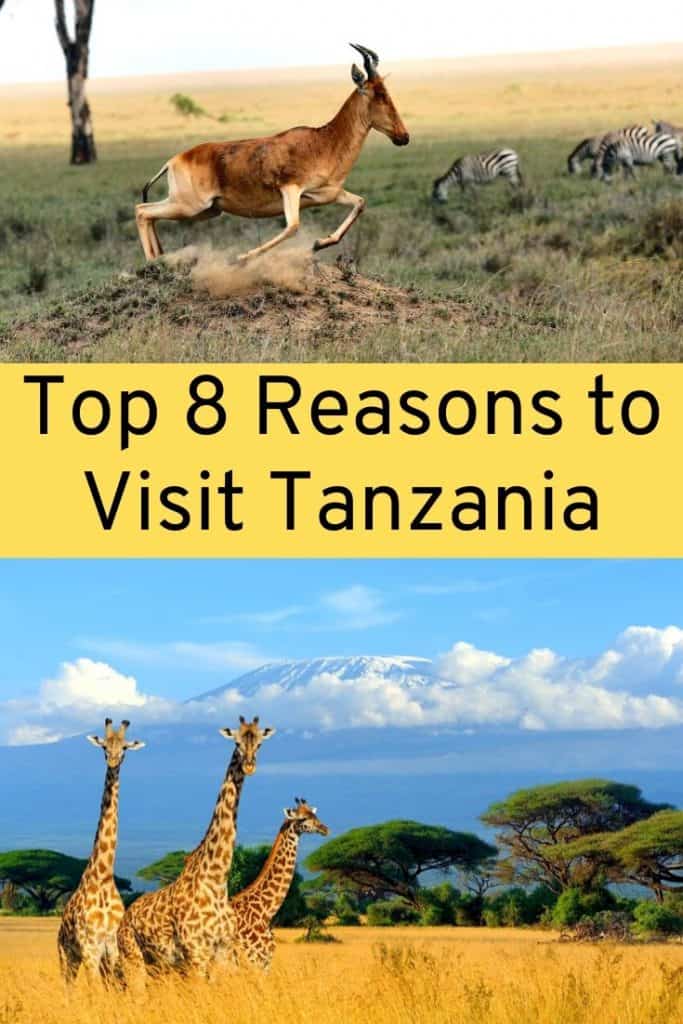 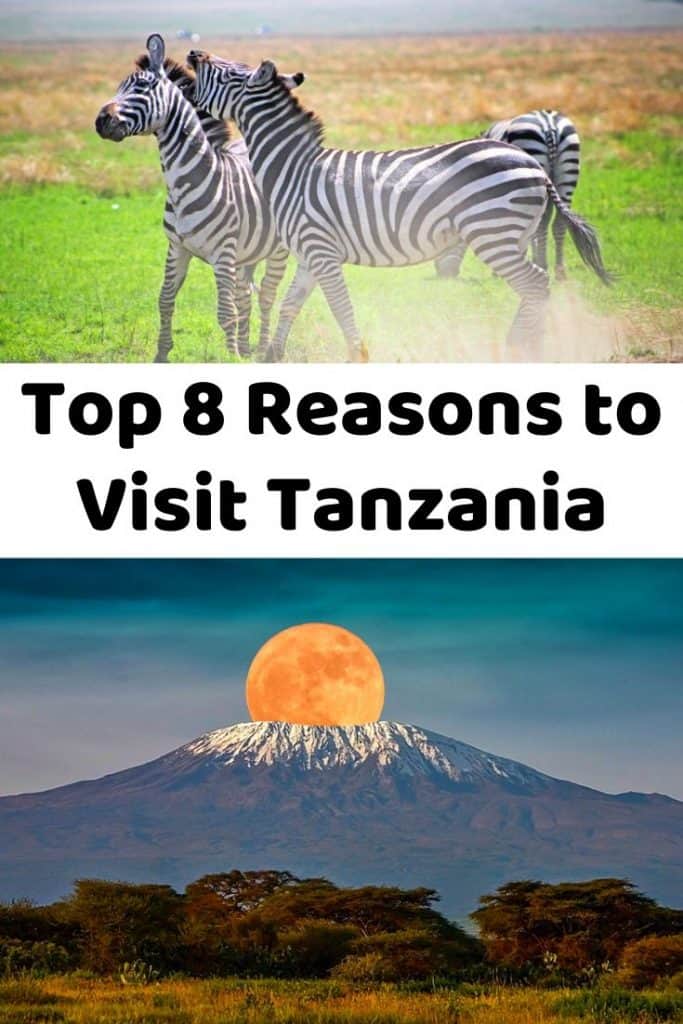 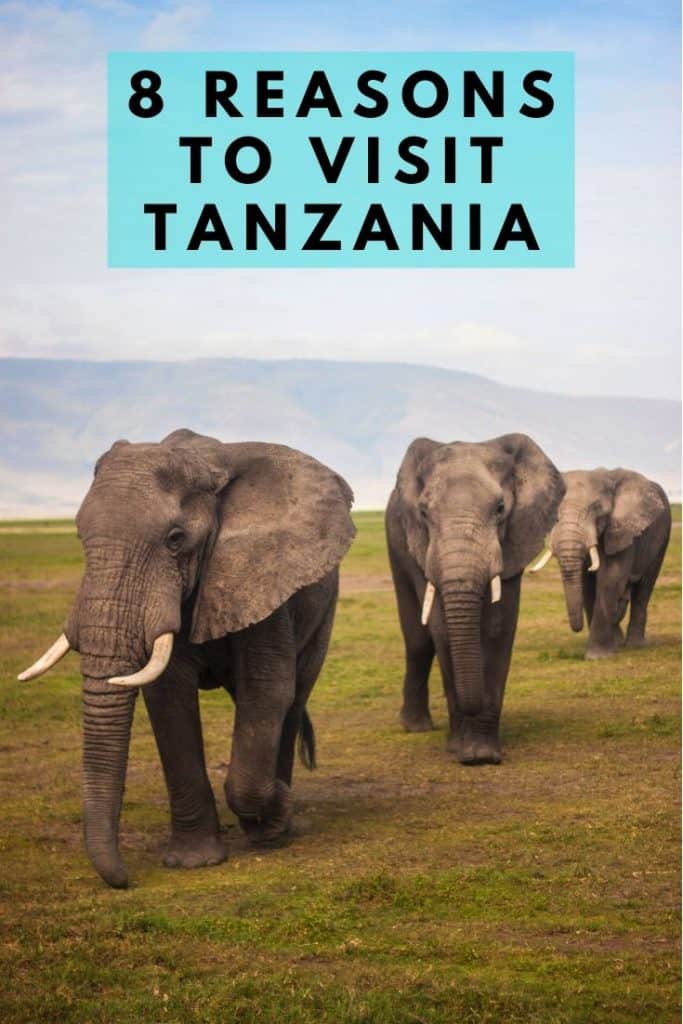 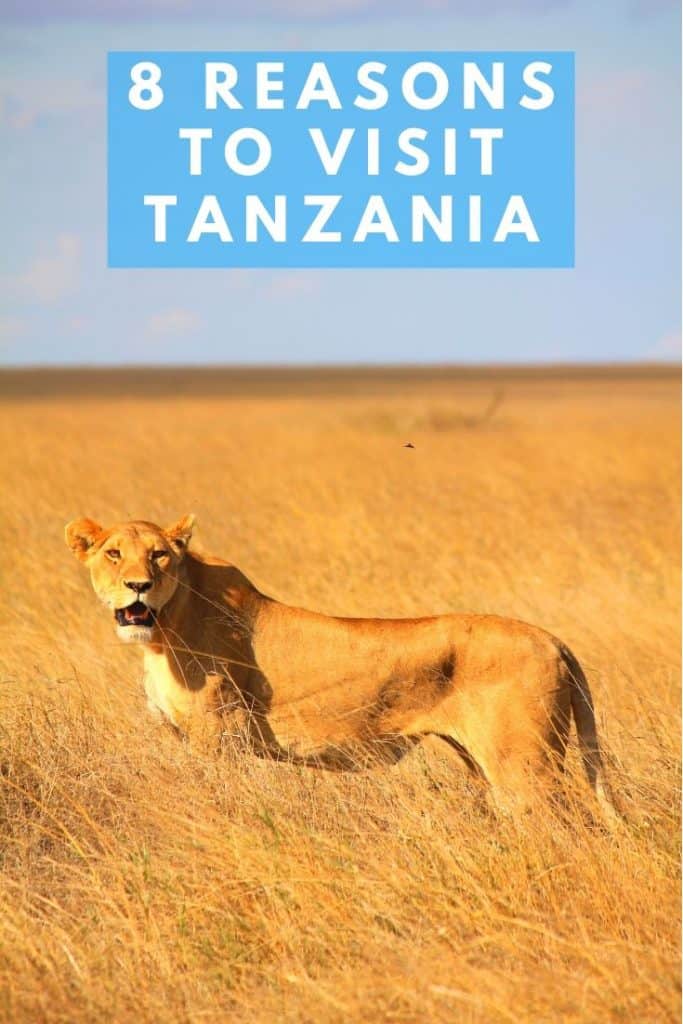