Since I was a very young boy, I have always wanted to drive a team of dogs through a forest trail heavy with snow on a crisp winter day. I’m sure dog sledding is many a Canadian boys’ dream, but, if you grew up in town and your family dog was a poodle, it was probably going to remain a dream, at least for a while.

That was true for me until this year when we were invited to Northern Edge Algonquin for A Taste of Maple experience — where we were offered a chance to go dog sledding. 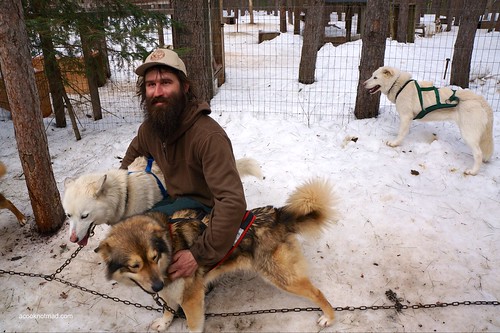 Ed Schmidt and his Sugardogs

Ed Schmidt and his Sugardogs

A short drive away from our beautiful accommodations, we met up with Ed Schmidt and his Sugardogs on a piece of land that held his kennel and about fifty very enthusiastic sled dogs. Not every dog in the pack was a blue-eyed Husky like you may imagine, but all were friendly and looking for a scratch behind the ear and some loving attention. That’s because Ed raised each dog himself, starting them off living with him until they were ready to move to the big kennel.  My two lead dogs were actually Husky-Beagle mixed (picture a large blue-eyed Beagle). 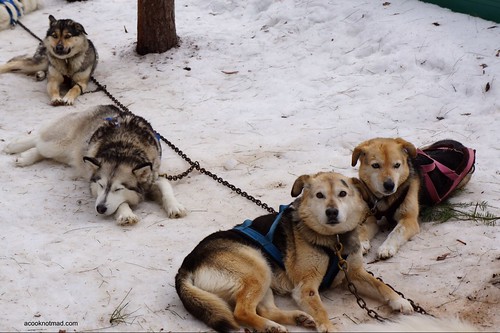 About to realize my boyhood dream

The time had come and I was about to realize my boyhood dream.

But first we had to have a lesson on how the sleds are rigged, the dogs are harnessed, and most importantly how to drive the team. It turns out that there is quite a lot for the musher to do in order to keep the sled on the trail and the dogs happy. As the musher, it would be my job to apply the foot brake properly in order not to run over the dogs going downhill and use copious amounts of body language and man handling to the sled to run smoothly down the trail and slip between the trees.

Standing at the back on the the two sled runners only lasts until the first corner or hill, where you may have to hang off to one side with one foot on the runner or jump off the runners completely in order to help the team up a steep hill or over an obstacle. The goal, we were told, was for the dogs to always have a taught harness without going slack and without holding them back and in any circumstance to never let go of the sled, never!

Rigged up and ready, with Nat seated nervously in the sled, my team of six dogs were raring to go, barking excitedly and bouncing vertically in anticipation of me releasing the brake. A firm “Lets go!” as I popped the foot brake and we took off in hot pursuit of the other teams.

It was just as I had imagined it would be as a kid, a beautiful day in the woods shared with a team of eager and dedicated dogs having fun in the snow. Nervousness melting away, we all settled in and I felt as though we were doing quite well, except for the occasional glance back from the dogs when I botched on the brakes or completely failed and dumped the sled on its side, coming to an abrupt stop.

Narrowly avoiding huge maples as the team pulled us down a very narrow trail cut through the pristine wilderness, Nat and I laughed and cheered as we cut hard corners and even popped over jumps; all while trying to earn the respect of the team by keeping up my end of the bargain by braking correctly and keeping us on the trail. To say I was having fun would be an understatement. 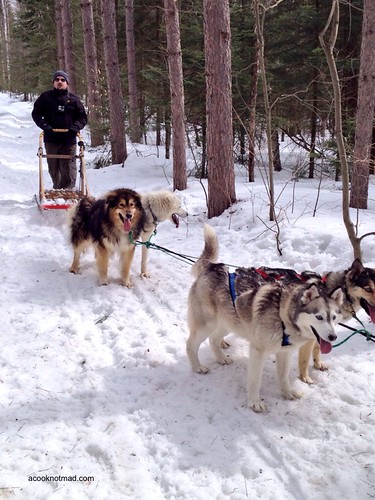 Unfortunately, like all great things, before we knew it our run was over and we were pulling back into the kennels.  Sad to not be able to keep going longer but stoked by our time together, we showed our appreciation by giving some belly rubs and loving to the stars of the day, the dogs.

Back at the Northern Edge lodge, tucking into our delicious dinner, we all shared our stories of wild corners and hairy wipe outs and we all said we would jump at the chance to do it again. 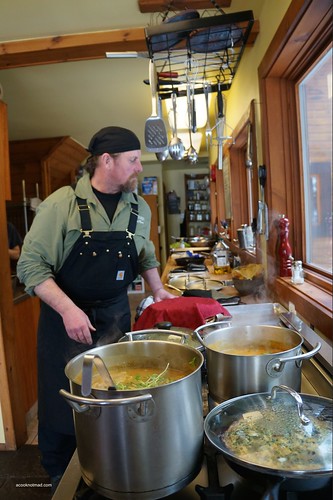 In the kitchen at Northern Edge Algonquin

Thanks to Ontario Culinary Tourism Alliance for inviting us on this great adventure.