Having a car gives you the freedom to build your own adventure. You don’t have to schedule your day around train or bus timetables, you don’t have to carry your backpack halfway across town to said bus or train stations, you’re not restricted to a set route or having to travel at set times, and there are places you can travel to that simply aren’t on bus or train routes.

It’s also a great way to see a country when you’re short on time. We certainly would not have been able to see as much of Slovenia (including a side trip to Zagreb and the Plitvice Lakes in Croatia) as we did in nine days had we not chosen to hire a car.

Ok so I don’t drive (I passed my test at 17, narrowly missed colliding with a lamp post a few days afterwards and then decided that perhaps driving wasn’t for me!) but my boyfriend Stu somewhat willingly accepts the driving responsibility, as and when it arises. The way I see it, I’m the one who researches, plans, organises and books every single detail of our trips away (yes I like it that way but it does take up a lot of my time) so doing a bit of driving from time to time is the least he can do in exchange. Obviously he sees it differently.

But travelling as a couple is all about compromise, and if it hadn’t been for the compromise we made regarding our latest trip to Spain, I wouldn’t be writing this article now.

If our eight days away had been left entirely up to Stu, we would have spent the entire time skiing or snowboarding on the slopes of the Sierra Nevadas – as we have done many times before. If it was up to me, I would have chosen Fez and Chefchaouen in Morocco or a few days in Helsinki followed by a boat trip across to Tallinn. Don’t get me wrong, I love Spain and I love skiing but I wanted to explore somewhere I hadn’t visited before.

So the compromise we struck was to spend a few days skiing and snowboarding followed by a mini road trip around Andalusia’s Pueblos Blancos (White Towns), starting in the ruggedly beautiful town of Ronda.

Ronda is supposedly one of Spain’s oldest settlements, situated 180 kilometers southwest of Granada, on the edge of the Sierra de Grazalema National Park. Its old Moorish town, La Ciudad, and the largely modern Mercadillo quarter are split in half by the gaping river gorge of El Tajo.

Ronda’s primary tourist attraction is its iconic Puente Nuevo (new bridge), which was built to link the old and new parts of town.  It towers dramatically 120 metres above the canyon floor. 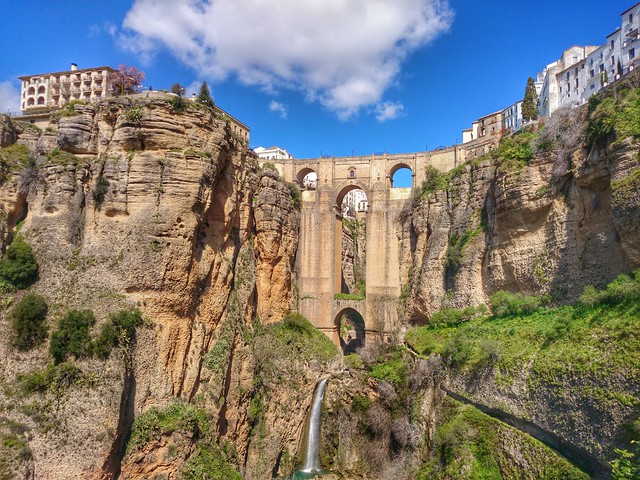 Set along a narrow river gorge and famous for its cave houses (once used for storing wine) that have been built into the rocks overhanging the Rio Trejo, Setenil de los Bodegas has ridiculously beautiful, ridiculously narrow streets that I would not advise attempting to drive a brand new hire car through. 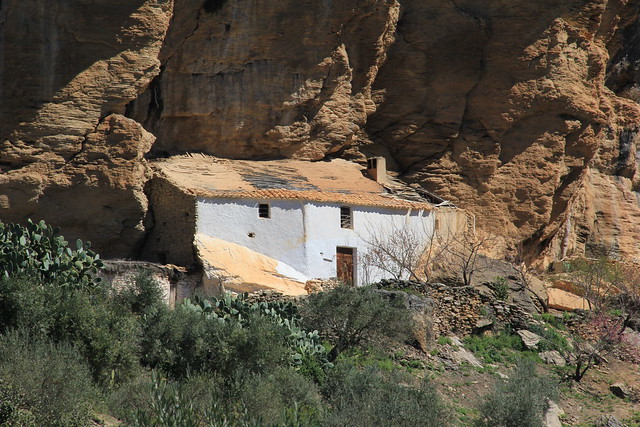 Instantly recognisable by its imposing neo-Renaissance church and Almohad castle that tower boldly above the town’s dense cluster of white-washed buildings, Olvera is one of the most visually stunning of all of Andalusia’s Pueblos Blancos. 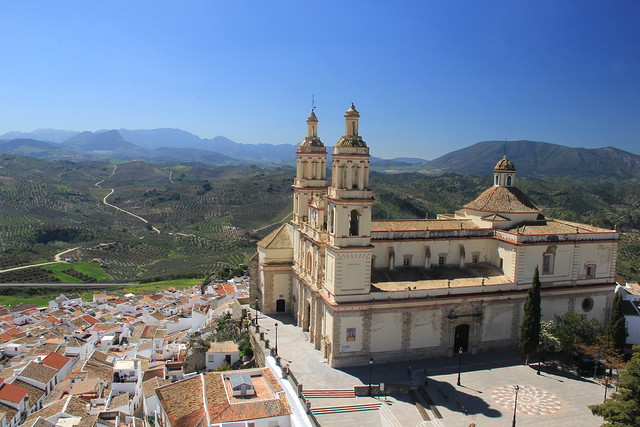 Its surrounding hills are also covered in olive groves and the area is famous for producing some of the best quality olive oil in Andalusia.

The scenery we passed during our drive to and from this town was some of the most stunning of our entire trip. We followed narrow switchbacks as they snaked their way through the mountains, every corner we turned bringing with it an equally incredible photo opportunity. We also managed to get up close and personal to some Fallow Deer (at least, that’s what we think they were!) and the odd mountain goat. 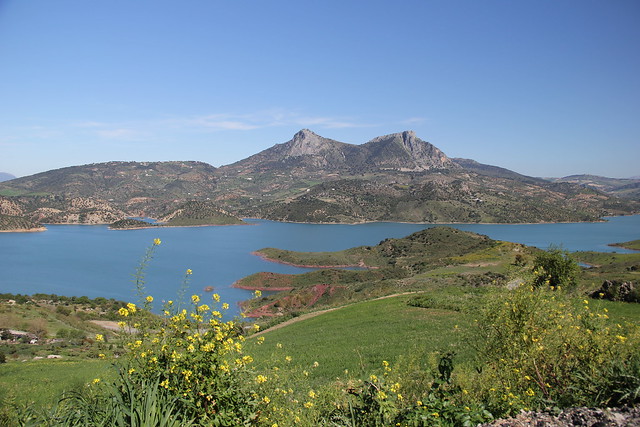 My favourite of all the Pueblos Blancos we visited, Grazalema is situated at the foothills of the Sierra del Pinar mountain range, and is surrounded by limestone peaks, verdant vegetation and hiking trails stretching out in every direction. 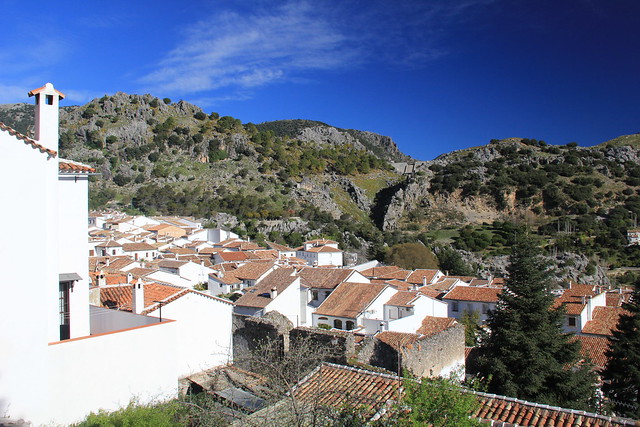 You can walk down cobblestone streets flanked with pristine white-washed buildings, pot plants and vibrant pink and purple flowers spilling out of their decorative wrought iron balconies. 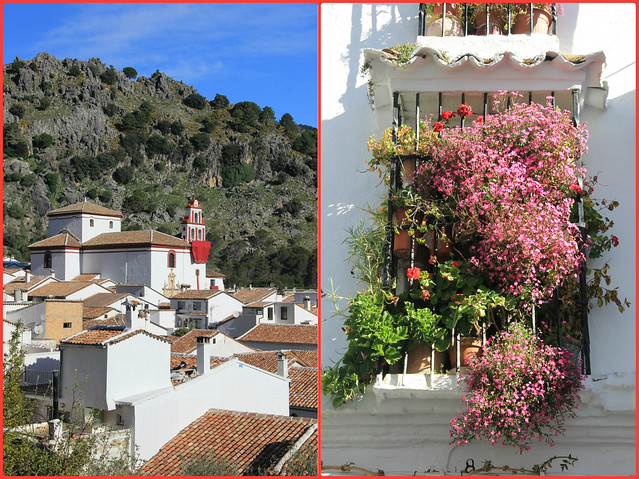 As the evenings draw in, the comforting smell of woodsmoke fills the air and the happy sounds of children playing echo all around you.

Of all the Pueblos Blancos, Villaluenga del Rosario sits at the highest altitude. It’s also one of the smallest, with a population of just 471 inhabitants. There’re a few sights to see here (including a 16th century church and a bullring constructed entirely of stone) but the main reason we stopped here was to visit its artisan Cheese Museum.

Papayo cheese is unique to this particular area of Spain, as it’s made using milk from a goat that can only be found in these parts.  Imagine how gutted I was when I discovered that the museum was closed on the one day we happened to be passing through. 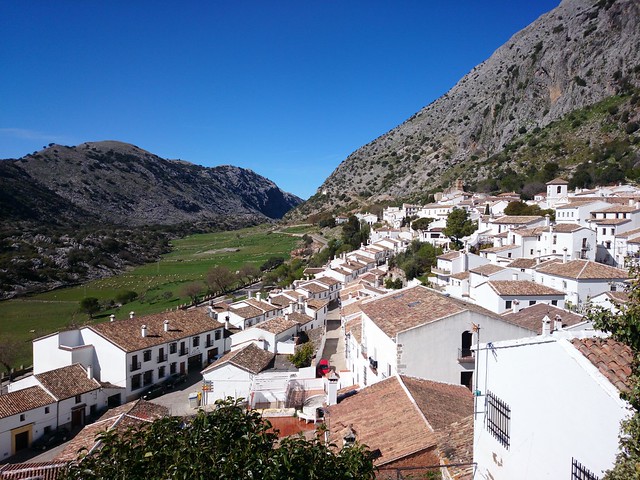 Arcos de la Frontera began life as a Roman citadel, turned Moorish during the 11th century and is now Christian. It occupies a dramatic location, perched atop a steep sandstone cliff and is one of the largest Pueblos Blancos, so exploring its narrow, hilly, labyrinthine streets will keep you entertained for hours. 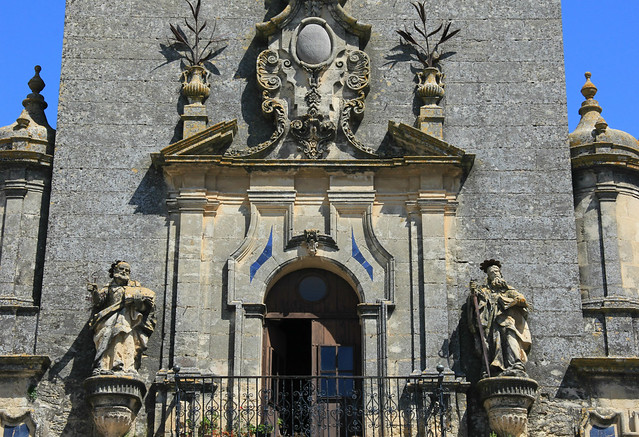 We rounded off our road trip in Malaga. Unfortunately we failed to realise that we were arriving smack bang in the middle of the Semana Santa celebrations, and that much of the city centre had been made off-limits to vehicles as a result of this.

But, three hours and a couple of cervezas later, we couldn’t have been more pleased about our ‘bad’ timing. The city was alive with elaborate processions, music, and colourful-costumed revellers dancing in the streets. It was a world away from the tranquil streets of rural Spain that we’d been driving through just hours beforehand.

Tips for Booking a Budget Skiing or Snowboarding Trip