I’m jinxed. Was going to say cursed, but that word doesn’t have the right feel. Cursed feels more severe, more substantial. This is not some affliction that somehow handicaps me substantially in my life. My jinx only seems to happen when I travel alone internationally – and many would say the mere opportunity to take these trips itself makes up for my slight travel mishaps, but whatever.

I apparently cannot travel abroad without some leg of every international solo trip I take screwing up somehow. I’m now four for four in European trips.

On this latest trip, I didn’t have any problems at all going over. Didn’t sleep on the plane much, which makes for a pretty hellish first day in Europe, but the flights went perfectly fine and I met up with Steve and Dave when I got in Munich with no complications. I was actually thinking to myself on the plane over, “is this to be the first flawless trip?”

On the way back, I thought my mishap was going to be on the first leg of the trip, from Prague to London.

Prague has a really nice airport that appears to have been built recently. Not surprising, since the Czech Republic was Soviet controlled and a non-tourist destination until fifteen or so years ago. Now it’s a hot spot and need a bigger airport to handle all the tourists. When I got there and got up to the counter to get my ticket, the airline person looked me up on the computer and then spent about five minutes clicking through various screens. That’s not a good sign. She ended up telling me that she had to get her supervisor to come over and help her and she asked me to step to the side and wait for him or her. Yea – that’s not a good sign either. Ten minutes later the supervisor came over. Gave me the ticket from Prague to London and said that I’d have to recheck in London, but that I was confirmed on the flight from there to Chicago and then on to Northwest Arkansas. I had little faith that would work as planned, but I was going to make it to London at least.

Made it to London. Wrote a little blog about Heathrow Airport that should appear down underneath this one somewhere. Rechecked my flight to O’Hare and got on my flight to Chicago with no problems. I was almost in the clear.

I’ve really always liked O’Hare. It could have something to do with the fact that I was born in Chicago. Might just have a soft spot for it because I can lay some tenuous personal claim that it was my original airport. I remember years and years ago reading that O’Hare was the busiest airport in the world and taking some sort of pleasure in it. When Atlanta or Kennedy Airport or whichever it was took over the top spot in the mid-80s, I was kinda pissed off. Strange how you can have irrational attachments like that survive for such a long time.

We had a little problem landing in O’Hare because of some weather pattern in the area. In the back of my head, a little nagging feeling began to start. I was somewhat assuaged when we landed after only a short delay. We ended up landing only 15 or so minutes late. Plenty of time to get to my last leg, the flight to northwest Arkansas. I got my bags. Seamlessly made it through customs (does anyone really get checked in customs, even post-9-11?). As I was walking out with my luggage to the area where you had to recheck it to get to your next flight after going through customs, the person waiting there asked me what my next destination was. I told her and she pointed me over to the customer service desk. I walked over and asked about my flight.

Cancelled. Not delayed. Flat cancelled because of the weather. Damn it. The jinx strikes again. 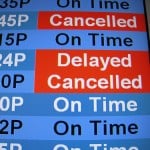 Was it raining? No. They could land in this weather, but couldn’t take off? O well – not going to argue with anyone about it because (1) its not going to do any good and (2) better safe than sorry, I suppose.

Although I was annoyed I went ahead and needed to see about getting them to set me up at a room somewhere and get rebooked for a morning flight. Although it’s really worthless to argue with the airline people at the counter for cancelled flights because of weather there were a damn large number of people venting on the poor ticket counter people.

“I have a vitally important meeting in the morning. What am I supposed to do?”

“Do you see that I have 3 small children traveling with me? Cannot believe you cancelled this flight. Arrrgggg.”

“I will never fly this airline again.”

Incredible. It’s the weather. Get down on a knee and start cussing the big Man/Woman/It upstairs. Sam the ticket agent didn’t cancel your damn flight. He’s just making $11 an hour to listen to you be a jack-ass.

I handed over my boarding pass to XNA. They quickly rebooked me on a flight that left around eight the next morning. I asked about them setting me up with a room and was told that the airline didn’t have to get you a room if your flight was cancelled because of weather, since it was out of their control. Bummer. They did hand me some coupon or voucher and said that the airline had some deal with this hotel to get a reasonably cheap room. They said the shuttle to this hotel would be outside the northernmost baggage claim.

So I follow directions and head out to get my shuttle. Figured I’d get a crappy meal at the hotel restaurant, get some reading down and maybe write out some of my thoughts from the trip. When I got outside and started walking around to find the shuttle, the rain started. And picked up quickly to semi-monsoon status. At least I knew they weren’t lying about the weather.

I walked back and forth out around where they told me to catch the shuttle. No sign of it. There were a bunch of people milling around catching cabs and shuttles to various local hotels, but no sign of this shuttle at all. I start asking other shuttle drivers if I’m in the right spot to get this one and no one has heard of the hotel. Not a good sign. I decide to just hop a cab there. I get in the cab line, which went pretty quickly, and get into a cab. Hand him the voucher before I get in and ask if the hotel is nearby, since I don’t feel like getting raped by another cabbie. He’s never heard of the hotel either. He asks another cabbie nearby and that guy hasn’t heard of it either. Not a good sign. He then gets into the cab and pulls out some pamphlet with directions to hotels near the airport and can’t find it there either. He looks at the voucher again, which doesn’t have the address, sees the name of the hotel is something like Addison Comfy Inn and says “I think I can find it – I know where that town is.” Hmmmm – I don’t think so. I decide to just hop one of these other shuttles to another room.

I ask the first shuttle guy if there are any vacancies at his hotel. No luck. Second guy has the same answer. I’m getting the drift. This could be ugly. Never have slept in an airport before.

I go back inside to use the hotel phone thing they have at every airport. List of hotels with pictures and such and phone where you dial 32 to get the Marriott listed there. I try to find a relatively cheap hotel. Pretty quickly, I understand that there are no cheap hotels near major airports where there are thousands of people stranded by cancelled flights. Most are booked. The ones that aren’t are running around $300 a night. Doesn’t that make me feel special. I finally break down and book one. Go outside and their shuttle actually shows up.