Heathrow is a hellish experience once you get there and getting to Heathrow is no picnic either. On signs and flat screen monitors throughout the various terminals it bills itself as “the busiest airport in the world.” While that might be great for whoever owns it, it certainly isn’t that great for anyone that has to use it.

I seriously doubt today was an overly busy day in this human conveyer belt. This was a mere normal weekday afternoon and there were still hordes of people going though the various lines you have to navigate. I don’t like most people to start with, but I really dislike them when they are all bunched all up together somewhere. And people in lines are very rarely in the type of mood to make them more appealing.

Last year, my sister, her husband and their two daughters, ages 5 and 8, flew back from Heathrow direct to LAX the day after the big bomb scare in Britain. It was the one when some Islamic radicals were supposedly going to try to blow up some planes with bombs compiled from ingredients contained in small carry-on containers for various liquids. It was a very public coup for the British government – one that the U.S. government immediately tried to take more its fair share of credit. A good bit of the plot was later discovered to be overblown by the Blair and Bush administrations in political trouble at home and both needing a ‘victory’ on the War against Terror, but its unpatriotic for us to question the War. I wonder if this blog is going to be added to my FBI file? 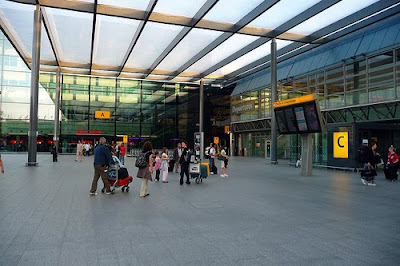 Regardless, for my sister and her husband, it was a long, long day of travel. If she’d been more excited about her London accommodation it would be one thing, but…. They spent around twelve hours in various security lines and then just sitting waiting around to board their plane. They were then were rewarded with a ten hour flight to LAX. Almost a twenty-four hour travel day — and that’s with a direct flight.

While the time spent just waiting around doing nothing must have been bad enough, the time spent grounded was compounded ten fold by the added security precautions slapped in place that day. The officials at Heathrow declared that day that you could not take anything onto the planes. No laptops, no Ipods, no books, no toys to keep kids distracted for what ended up being close to a 24 hour day. Nothing. Nada. Not even finger puppets. Before you went through the security gates, you had to check everyone you had into your checked baggage. Thank god that those two kids are truly some of the best and most well behaved I’ve ever met.

My mother called me a few times that day to determine whether I thought my sister and her hubby should just cancel the flight because of safety concerns. I reassured her that the safest flight that her daughter and grandkids would ever be on in their entire lives was a flight out of Heathrow on that day. They went through something like 5-6 different full security checks. If you were ever going to blow up on a plane. . . it wasn’t going to be that day, at least from that airport.

In any case, back to my little day at lovely Heathrow. After going through the winding security line to get up the metal detectors for Terminal 3 (they suggest setting aside 45 minutes – that’s about right on a weekday afternoon like I was traveling on – God knows what it is on a busy travel day), I then follow the signs that supposedly lead me to the gates. Suddenly it appears that I’m in a line to enter a huge duty free shop. I back up, turn around and walk back, looking for another sign leading me to a different area that leads to the gates, because I obviously hadn’t gone in the right direction. Don’t see another option. Everyone coming out of the metal detector/security area seems to be going through these people who are relooking at your passport (in case you somehow metamorphosed into someone different after you passed through the other half-dozen or so places you have to show your passport and ticket) and then into what certainly looks to be a huge duty free shop. I’m not interested in shopping, but it appears I have to.

I enter the line, show my ticket and passport, and get waved in. It’s a combination of Disney World and Vegas. Just the bad parts.

Disney World and Vegas are eerily similar to each other in one very important respect – they are almost perfectly crafted to get every possible penny out of your pocket. Truly amazing. Vegas has been written about frequently. The sounds of the slot machines when they pay out, which they place throughout the casino and not just in one area, leads to an internalized feeling that everyone is winning. It’s funny now that even when coins aren’t used, the sound of hundreds of coins hitting the payout slot still sound when you electronically hit a jackpot. The way the floor layouts are set so that you have to walk through the casino every time to get to the elevators up to your room. Or that you then have to walk back through the casino to the restaurant from the elevator section. Disney World is the same way. Take the Pirates of the Caribbean ride and when you exit your little boat, you then exit through the Pirates of the Caribbean shop, where small children scream, “I want that sword!!” or “Mommy, gimme that hat” that they just saw on the ride. Brilliant. Of course the modern marketing perfection also ruined my childhood memories of that ride from years back, but ‘o well. Fond childhood memories are overrated, I suppose. Buy more stuff.

The placement of the duty free shop so reminded me of the Pirates of the Caribbean ride. This time instead of small children loudly clammering for cheap, plastic toys, you got to enjoy the sight of grown ups quietly scooping up grown-up toys. And there were some expensive grown-up toys. “Honey, how does this Bvlgari watch look on me?” “Hmmm. The Chanel purse or the Dior one?” You couldn’t avoid the massive shop, even if you wanted to. Luckily I had a good stay in a hotel in London to get my energy up to deal with this.

I successful navigate the aisles of the duty free shop without being sucked into a spontaneous purchase and find my way out of there. The layout of the terminals in Heathrow is quite unique, not that I’ve seen a lot of the world yet. There is a large central area where all the shops and restaurants are located. This is the area you enter after you exit the huge duty-free shop. Plenty of seating and televisions and the like. Shops of all sorts and restaurants all around the place. 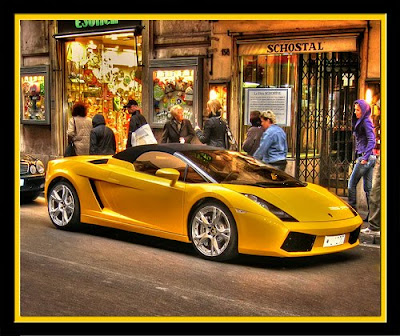 Rolex, Harrods, Cartier, Hermes, Mount Blanc, Ferragamo, Versace. High-end stores everywhere. An excess of excess. A guy raffling off a yellow Lamborghini. In an airport terminal. That car looked a bit of place, to say the least. 20 pounds to enter. Was shipping and handling included for the winner? Cigars, jewelry, men’s and women’s clothing, fine wines and foods. Rodeo Drive in an airport.

There are large screens that have the lists of flights and the respective gates. If you get there far enough in advance of your flight (as you basically have to these days), your flight doesn’t have an assigned gate when you get to this collection area. As such, you are forced to wait around in this shopping area.

I’m sure there is a logic to this layout that those in charge claim is related to efficiency of the airport, but to my eyes, it looks more like another reason to keep you in the areas where you are supposed to buy stuff. Even if you wanted to go to a gate and wait you couldn’t. There aren’t any seating areas up in the gate area, until you go through the check-in line at your gate – and you obviously can’t do that until you know which gate your flight is going to be at.

I’ve got three or so hours to kill, so I decide to get a nice lunch. I grab a seat in Brasserie Chez Gerard. Pretty fancy for an airport. Ended up sipping on a half-bottle of pinot noir from Burgundy eating a tasty lamb burger with goat cheese. Yea – turns out that life ain’t all that bad after all. The bill is in British pounds sterling. I pretend to forget the exchange rate as I sign the credit card receipt so I don’t have to ponder the cost of the meal. I silently curse George W. Bush for the exchange rate. Thanks for taking us from a budget surplus to a huge deficit, Georgie.

After I finish lunch, I go out and see that my flight has been assigned to a gate. As I walk to the gate, I see sign that says, “no shops or restaurants past this sign – make sure you have got everything you need.” This seems to confirm my belief regarding the reason they organized the terminal the way they did. Walked to the gate area, which was Spartan to be generous. No frills at all, probably because there is nothing to buy here. All the time and money on the consumer section. I felt good that I didn’t have to pay to go to the bathroom.

Through another security area at the gate. Another search of my carry-on bag. On the flight for the trip back across the pond.

Up, Up and Away: Israeli Security and Easy Jet Adventures