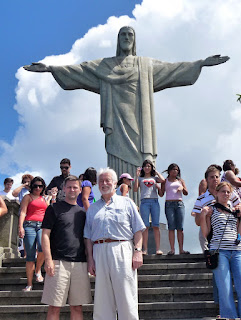 The MOL Wish docked in Rio de Janeiro before breakfast and after everything cleared immigration and customs, we had more than a half-day to explore the city. It is vast and huge megacity, with well over 7 million people in metropolitan area. The shipping agent set Thomas and Jasmine and me up with a car and driver for the day, for $40 each. Pretty good price to get driven around all-day and taken where you want. He first drove us to the large football stadium in the middle of town, the Maracana, where the four – yes, four different, major football teams for one city – four teams play their games. I suppose it was the first stop on the tour because he was Brasilian. . . and their priority is, no doubt about it at all, football.

We then went off to the top of the mountain with the famous statute of Christ overlooking Rio, Christ the Redeemer. It took ten years to make and quite surprisingly, there were no major accidents or injuries during construction. It is made out of poured concrete and covered with soapstone. It was completed in 1931, after nine years of construction. From the road below, you take a 20-minute trolley car ride up to the peak or take a taxi all the way to the top, which is 710 meters high. It is huge. And quite impressive. Not only up close, but also from the various places in the city that you can see it.

What surprised me when we got up there was how mountainous the immediate surroundings of Rio are. There are a variety of mountains that rise up from sea level to 200-300 meters strewn all over the place. From the top of Corcovado, the hill that the statute sits atop, you can see and entire city and its various 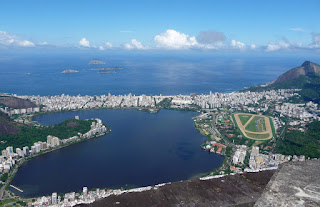 beaches spread out before you. It is a truly beautiful sight. Off to your right is Ipanema beach, famous for the song ‘The Girl from Ipanema.’ To its immediate left is Copacabana beach, one of the most famous in the world. Unfortunately, as I have the uncontrollable jute box in my head, it almost goes without saying that I had that damn Barry Manilow song in my head all day. Then left of that is a 300-meter tall mountain that frames the entrance of the harbor and then Flamengo beach off to its left.

It is quite spectacular. From Corcovado, our driver then took us down past the major beaches. We got out and took some pictures. I verified that Brasilian women wear the tiniest bikinis known to mankind (unfortunately, as is always the case at th 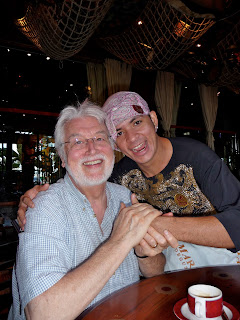 e beach, many of them should have been wearing more clothing). And we then ate lunch at an all-you-can-eat seafood place that was a total tourist joint. Great food. Massively overpriced. But so cheesy it was almost worth it.

Flamboyantly gay waiter who called himself MacGyver (see his th

eme song below), dressed in a pirate uniform, as all the wait staff was. He didn’t really walkaround, it was more a combination saunter/shimmy/dance effort. Though the Jones’ live in San Francisco, even they were impressed. Knickknacks were tied up to the ceiling – chairs, old lamps, various ropes and such. Basically it was Pirates in the Caribbean. Alas, without Keira Knightley (or Johnny Depp, for you ladies out there).

On the way back, we had the driver stop by a supermarket, so we could buy some munchies and stuff to keep in our rooms for the 8-day ocean crossing we were embarking on that evening. In addition to some chips and crackers, I bought a 12 pack of beer for my refrigerator. I was unaware that bringing alcohol on board was a customs violation.

Our driver didn’t speak any English, but when we were putting our bags back into the car to head back to the ship, he grabbed the bag with the beer and put it under his seat. Then, in that sign language/part-real language thing that I’ve gotten moderately good at, he told me that we would have to sneak the beer past the security check points, so I didn’t get busted. I was hoping that the punishment for getting caught, after my pleading total ignorance of any knowledge of customs procedures, was merely going to be confiscation of the beer. I really didn’t want to think about any other alternative. 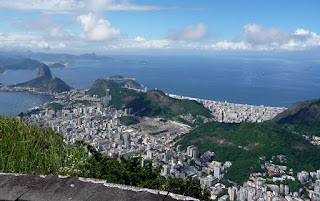 Of course, of the three ports I had been to on the MOL Wish, Rio was the only one so far that even minimally cared about security – those articles you have read about a fear of someone smuggling in a nuclear weapon through one of our ports?? Don’t know about the security when the ships get to the U.S. and off-load, but it didn’t seem to difficult to get anything on board out here. We pulled up to the first checkpoint and our driver immediately hopped out of the car with our passports. The security person asked him to open the trunk, took a quick look inside, took the passports in to the office and we were on our way in a couple minutes. The driver got back in, pointed to the truck and the beer under his seat, smiled and basically said, “see, I know what I am doing.” I agreed. 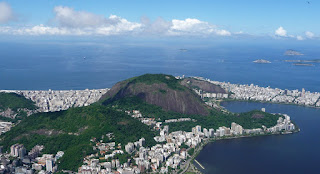 Next checkpoint was even faster and then we got to the last one, quite close to the ship. There were two security guys in a car parked there. We pulled up and our driver was obviously asking to take us the last couple hundred yards to the stairwell (which was located behind a couple 18 wheelers and out of sight of the security people for my unloading of the contraband). It was obvious that these two guys wanted nothing to do with that. His car was not authorized to go any further.

Our guy kept on in a conversation with the two security guys that I imagined went something like this: “Hey guy. You gotta drop them off here.”
“Come on guys, look at this lazy Americans. They don’t want to walk those 200 meters to their ship. Let me go.”
“Sorry. Rules are rules. This is as far as this car can go. Tell them to get off their pampered asses and walk. They are no better than anyone else having to follow the rules.”
“Guys, guys. I have been dragging them all through town for hours, pretending not to understand English while they prattled on about Rio, and their ship and traveling. I’ve played this perfect all day – my tip probably depends on this. If I have to drop them off now, it is going to cost me. Come on. 3 minutes. Do it for my wife and kids.”
“Christ, can you believe this guy Lennie?”
“Let him go George. What’s the difference to us? Hell, they might call their embassy and create an incident if we make them walk.”
“OK buddy — 3 minutes. That’s it. And no way we are letting you carry their stuff up to the ship for them. They have to at least do that.”
“Ahhhhh. Thanks.”

And as I sit here and drink my Antarctica Cerveja Pilsen in my cabin typing this – I think this whole smuggling thing is quite worth it. 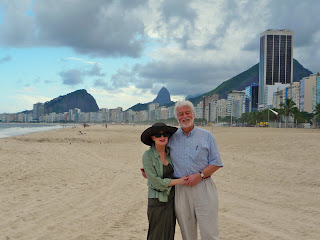 Jasmine and Thomas and on Copacabana (anyone recognize the last scene from ‘Fletch’?)

What to know before you go to Rio de Janeiro