Skip to content
Home » Destinations » Asia » 5 spectacular things to do in Sabah, Borneo

The very word Borneo conjures up images of lush forests, remote outposts and wildlife as it still exists in few places on earth. Rapid development threatens an environment which is both diverse and fragile as well as a traditional way of life fighting hard for survival.

The Malaysian province of Sabah, known as the ‘Land Beneath the Wind’, sits at the top of the island of Borneo, the rest of which is occupied by Sarawak (also Malaysian), the Indonesian province of Kalimantan, and the tiny Sultanate of Brunei.

Most people visit Sabah either to climb Mount Kinabalu, Malaysia’s highest peak and a World Heritage Site, or to get a PADI certificate in some unbelievably beautiful spot, like Sipadan Island.

Not being in an athletic mood I did neither, but what I saw was so much better than what I thought I would see.

I could list plenty of memories that will forever stay with me but if you choose only five experiences – in addition to climbing or diving of course – these are the ones that will really stick. At least they did for me.

1. Watch the sun set over the South China Sea

I’ve seen my share of stunning tropical sunsets, but nothing prepared me for this spectacle. It was like walking into an impressionist painting, its primary colors jostling one another, the clouds slowly stretching, dissipating, until they too went out in a burst of violet and ochre. Whatever the reason — proximity to the equator, humidity, air purity — all contribute to making this one of the most astounding sunsets in the world. The best views? In Kota Kinabalu, Sabah’s capital, try the Sutera Harbor, one of the nearby islands, or Tanjung Aru Beach. 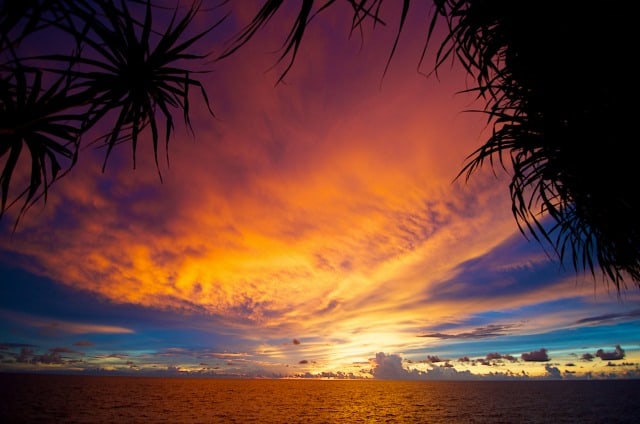 An irresistible sunset over the South China Sea – unretouched, unenhanced… as is.

2. Spot the monkeys along the Lower Kinabatangan

Possibly the one dream I most wanted to fulfill when coming to Sabah was to spot the monkeys. Not just any monkeys, but the endangered proboscis monkey, a pot-bellied redheaded giant found nowhere else on earth and whose nose reminds me of, well, a limp male organ. These animals travel in packs, dangling from trees just beyond your line of sight. Most often they offer a tantalizing speck in the distance, but once in a while they approach within telephoto range, and that is a treat. If wildlife is what drew you here, spend a day or two along the Lower Kinabatangan, where rainforest and river meet. And if you can’t get to the river, at least visit the Labuk Bay Sanctuary, where you can watch them in captivity. 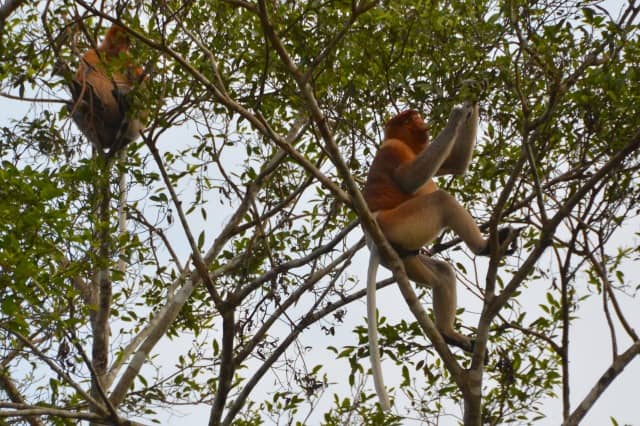 This proboscis monkey is one of 2000 left in Sabah; only 7000 remain worldwide.

3. Enjoy a homestay with a Rungus family

Every effort to preserve an indigenous culture threatened by modernity is worth supporting, which is why I stayed with a local family for a few days in northern Sabah. Remember that without visitors, most working-age Rungus – the most traditional of northern Sabah’s indigenous groups – would be headed towards city jobs. Rungus cooking, dancing, weaving, fishing, bee-keeping… all these once-dying activities are being revived within the homestays and passed down to younger generations now that travelers are creating a demand for them. And if you want something even more traditional, a few old-fashioned longhouses that were in disrepair have been spruced up, their rooms available for overnight stays. If all you need is a mattress on the ground and a mosquito net, this could be your homestay experience.

Read about what Gi2C did to prepare for the move and what type of company they did their internship at to get ideas for beginning your own internship opportunity in China. 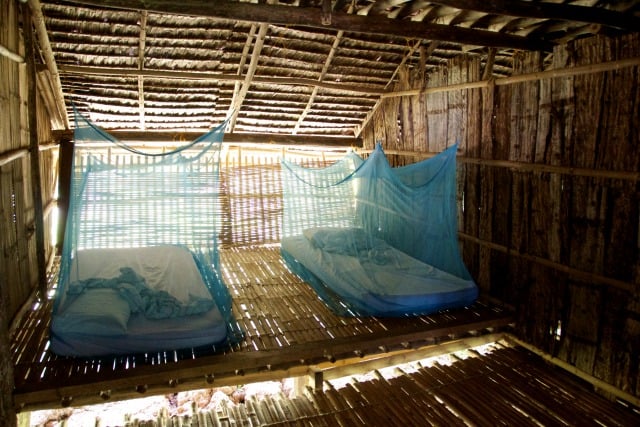 Accommodations are available in Rungus longhouses but they are quite basic, with communal showers and toilets.

4. Take a nightwalk in the rainforest

You may not particularly like leeches, those tiny black invertebrates who survive by falling on your skin and sucking your blood. But the occasional leech encounter is worth it just to experience Sabah’s nocturnal habitat. It is, I can assure you, at least as impressive as what you’ll see in daytime – but different. You can rent rubber boots and leech socks anywhere guided walks are offered – and do take a guided one. Not only are local guides better than you’ll ever be at spotting elusive night critters, but they’ll also make sure you actually get back to your starting point. Eventually you’ll forget about leeches and steamy jungles, and your eyes, now sharper and more attentive, will be attuned to the slightest twitter of wings or shine of a furtive eye. The forest will hum and hiss and envelop you in a way it never could when the sun is high. 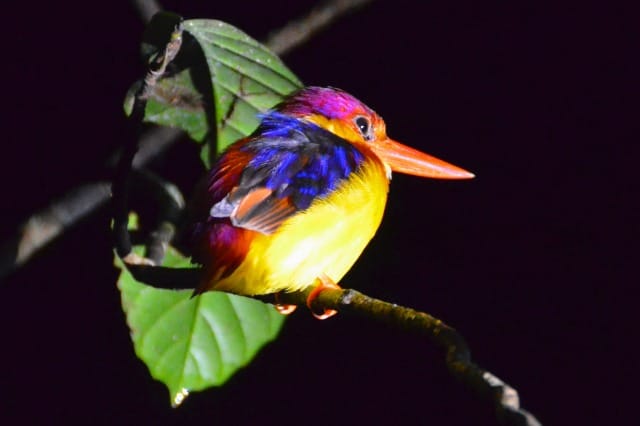 Most species visible at night can’t be seen during the day, like this colorful kingfisher.

5. Fall in love with Sun Bears

Falling in love is not too strong a word for what happened when I met these young ones. It was accidental – I was at Sepilok Orangutan Rehabilitation Center watching, well, orangutans when a guide mentioned a sun bear sanctuary opening soon across the road. Playful as puppies, these bears are the smallest of the eight bear species. They are in dire need of protection because of the destruction of their forest habitat for palm plantations, poaching for body parts (paws and gallbladders), and for the pet trade. So when you visit Sepilok – and you must – drop by the Borneo Sun Bear Conservation Center and watch them at play. Tearing yourself away will be difficult. 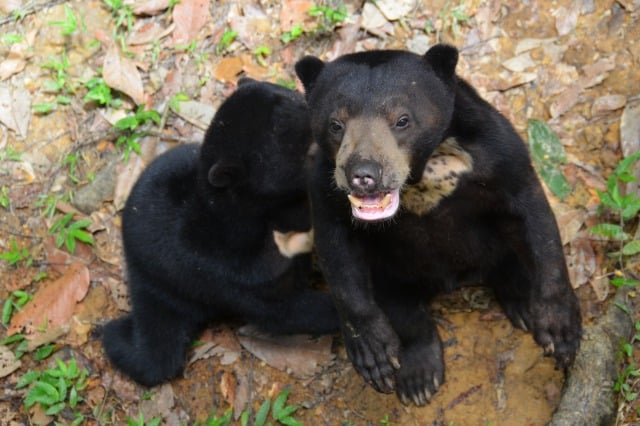 One sun bear cub nuzzles another; notice the characteristic beige markings on their chest.

What lingers when I think of Sabah is the word diversity. Culturally, the province has a mix of indigenous groups, mainland Malaysians and many people of Chinese descent, affecting everything from clothing to cuisine. Its tropical wildlife is unique, with some species found nowhere else on earth; that wildlife is thriving despite the threats as the government ramps up its conservation efforts. And then, whether you’re deep in a lush green rainforest, climbing a spectacular mountain, or simply sitting under a swaying palm frond watching the water lap at your feet, the sheer beauty of a landscape that so far has escaped destruction is possibly the greatest reward of all.

Leyla Giray Alyanak is a former foreign correspondent with a passion for travel and improving people’s lives in developing countries. At 43 she made a major decision to reinvent herself and left to travel the world solo for six months. She was gone more than three years. In 2007 Leyla created Women on the Road, an online resource that empowers women to travel solo. Please join her on Facebook and Twitter. All photos by Anne Sterck.

The Best Things to Do in Panama: A Guide to Sights, Stays, and Fun

7 thoughts on “5 spectacular things to do in Sabah, Borneo”