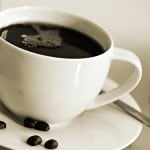 • Generally, I’ve been pretty depressed by the state of coffee in South America. It is strange to me that there are excellent coffee growing regions all around – Brazil and Columbia in particular – but they still serve crap, instant coffee in so many places. When I took a coffee plantation tour in Panama, the tour guide referred to the low quality coffee beans drying on the ground (with stems, leaves and so on mixed in with them) as “Nescafe beans.”

• While we are on the topic of coffee, I like just a small bit of cream or milk in mine. Just a small, little bit. The first few times I ordered coffee in Latin America, I saw “café con leche” on the menu. Leche is milk. I figured, “perfect, coffee with a little bit of milk or cream in it.” Ahhhh – not so much.

Coffee con leche is about a half and half mixture. About half milk and half coffee. And that’s a pretty horrible combination in my book. It reminded me somewhat of one of my roommates during freshman year of college, Dave Rubin.

We drank a lot of coffee that year. I suppose we thought that a few cups of coffee in the morning was some sort of sign of us finally becoming adults. One day I was doing the dishes and washed out a couple coffee mugs that Dave had used – and there was about a half inch of sugar at the bottom. I’d never noticed before, but he poured a ton of sugar in with every cup. “Would you like a little coffee with your sugar” became the roommates’ refrain to him every time he poured a cup.

He’d fit in well down here. They seem to like everything served sweet here. I’ve thrown away more than a half a dozen cups of coffee because they came to my table with sugar already in them.

By the way, if you want to order just plain, black coffee, its “café negro.”

• Sidenote story from freshman year in college. Before I went away to school, I only wanted three things from living away from home: (1) a liquor cabinet, (2) a kitchen, so I could cook for a dinner date — and assumably impress the hell out of some woman — and (3) the ability to stay up all night without answering to anyone.

Number 3 was a success. Too frequently. Number 1 existed, but was stocked with such horrible liquor that my father refused an offer of a drink the first time he visited. I don’t think I had a single date my freshman year of college, so number 2 was a bit of a failure. I did get to witness Dave screw up making a grilled cheese sandwich though – that was amusing. 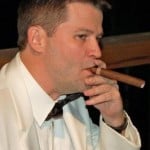 enjoying a Padron at my goodbye party (black tie optional)

• I love smoking cigars. Back at home, my cigar habit was getting to be somewhere in the five to ten cigar a week range. I really got to like a Nicaraguan cigar called Padron. They were smooth smokes and very reasonably priced – I could get a box of 25 of them for under $100.

As we all know, you can’t buy Cuban cigars legally in the U.S, because of the really stupid embargo on all things Cuban that has far outlived it usefulness, except in courting Cuban-American voters in Florida.

So I’ve been cigar shopping in a few places in Central and South America and the reverse problem appears to me here – you can ONLY buy Cuban cigars down here. And though I do love a nice Montecristo #2 occasionally, Cuban cigars are just way, way, way overpriced. I’m used to paying $3-4 for a cigar, not $12-18 per cigar.

So as a strange result of being in places where you can buy Cuban cigars . . . I am smoking very infrequently. I wouldn’t have figured on that.

• I’d say far less than half the time at the places I’m eating dinner there is salt and pepper on the table. That’s probably a good thing for me – I’m one of those people that habitually salts and peppers my food before even tasting it. As a cook, I know that is stupid, but I can’t seem to stop. In addition, especially in Central America, when they bring out salt and pepper – its salt . . . and then hot sauce not dry pepper, as we are used to.

• I mentioned in a previous blog about all the countries that the U.S. has either invaded or attempted to overthrow their government. There is a strange dichotomy, in my mind, of countries we screwed with and their choices of currency. Two countries stand out. We messed with Nicaragua famously for years, with the Contra War. Strangely enough, they have pegged their currency to the U.S. Dollar. Although they have a local currency, the Cordoba, its value is set against the U.S. Dollar – as our currency goes up or down in value, so exactly does the Cordoba. And although we invaded Panama a few decades ago and took out Noriega, their currency is the U.S. Dollar. The greenback is alive and well in the land of the canal.

If I was running these countries (and Daniel Ortega just go elected President of Nicaragua a couple years back – he of the Sandinista revolution and the target of the Contra War for all those years), I don’t know if I’d be happy having my country’s financial status tied so directly to the country that has screwed with us.

• Keeping with the theme of money, it is really, really nice to go to the ATM machine in some of these countries. In Chile, for example, one U.S. Dollar is worth about 600 Chilean pesos. This doesn’t mean much in terms of how much things actually cost (Chile is actually pretty expensive, compared to a lot of other places down here), but what is great is getting the receipt from the ATM machine showing your balance in pesos.

• And on the topic of currency, did you ever wonder where all the Sacagawea dollars went to??

Ecuador. Ecuador is another country that uses the U.S. Dollar as its currency. But when you get change there, you often get the one dollar Sacagawea coins back. The first time I got one back, I did a double-take when I looked at it. They were issued in the U.S. in 2000 and 2001. I feel confident in saying that I’ve never seen a single one in circulation back home. I saw dozens of them in Ecuador. 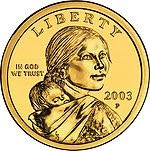 I wonder if they just loaded up big cargo planes with all of those coins and sent them down to Quito. “Here you go boys. We aren’t using these things. Go crazy.”

• And lastly on the subject of change – NO ONE has change in South America. It is truly amazing how many times, when I hand over a 20 or 50 or 100 peso note, the person in the store asks if I have exact change for what I’m buying.

One night in Quito, Ecuador, I went out to a bar with three of the girls I was traveling with for a week or so. The bar was fairly crowded – I’d say there were 50 or so people in there, drinking and dancing. I went up to the bar to buy a beer. The beer was $3. I handed him a $10 bill and he shook his head and said “I can’t change that.”

It was a TEN dollar bill. In a bar, for God’s sake. A fairly crowded bar at about 10 p.m. How the hell can you run a business and not have two one dollar bills and one five dollar bill in the cash register?

Yesterday, in Bariloche, Argentina (a very popular tourist town with no shortage of money around) I went to a store to buy a windbreaker. The store was a big one on the main commercial street in town. In fact, the store was a North Face store. The jacket I bought was $72 pesos. I gave her a hundred peso note. She asked me if I had two more pesos, so she could just give me $30 pesos in change. I checked my pockets and told her I didn’t have any small change.

She asked me to wait. Went to the back room for about 5 minutes, obviously in search of change and ended up coming back out and just handing me the $30 pesos in change. It wasn’t really a big deal in the scheme of things, but this store gave up $2 pesos. . . just because they didn’t have change in the cash register.