Some small thoughts I jotted down on my ride back after climbing down Mount Kilimanjaro from the village at the park entrance to Arusha:

• There are a large number of small bars that line the major roads in Africa, almost all with a Coca-Cola sign out front that has a picture of a beautiful black woman 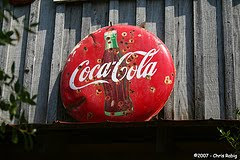 One of the bars I saw on this particular day was the Agape Canteen. Agape is most often used in the States in conjunction with the name of some church, e.g. Agape Baptist Church of Loneview. I thought it was odd to see a bar named in the same fashion, so I went ahead and looked up the definition to make sure:

a·ga·pe 2 (ä-gä’pā, ä’gə-pā’)
n.
1. Christianity Love as revealed in Jesus, seen as spiritual and selfless and a model for humanity.
2. Love that is spiritual, not sexual, in its nature.
3. Christianity In the early Christian Church, the love feast accompanied by Eucharistic celebration.

• The road between Moshi, which is a fairly large town near the foot of Kilimanjaro, and Arusha, which is the biggest city in the area, is about sixty kilometers or so. Between the two are a collection of small villages.

I saw a lot of guys riding old, one speed bicycles on that part of the highway. They each had 5-6 plastic, yellow jugs strapped to the back of their bikes. After seeing a couple dozen of these guys peddling along, I asked Eyan what the story was. He told me that they were bringing 20 litre jugs of fresh water to a market 10-15 kilometers away to sell. Luckily, the part of the road from the well to the market was slightly downhill. He told me they sold each of the jugs for 200 Tanzanian shillings.

The current exchange rate for Tanzanian shillings is about 1,250 shillings per U.S. Dollar. These guys were biking 20-30 kilometers round-trip for about a dollar.

There is a phrase that has been knocking about in my head for a few months now: the good fortune of the geography of birth. Get used to hearing it from me frequently. Any of our souls could have emerged anywhere on this vast planet. Count yourself lucky that you ended up where you did – cause it ain’t nothing more than good luck.

• Another common sight in Africa is chickens running around free everywhere. When you go into the smaller villages, you regularly see dozens of chickens and baby chicks just wandering around everywhere. The question that I still haven’t gotten a good answer for is how everyone keeps track of whose chickens belong to whom.

The other thing that popped into my mind was the old joke we’ve all heard a hundred times: why did the chicken cross the road? As I saw three chickens crossing the highway in front of our car, I thought that we’ve all probably used that phrase numerous times in our lives. . . and never seen a chicken actually cross a road. Even if you grew up on a farm, your chickens were probably cooped up or in some fenced-in area.

By the way, they did make it to the other side.

• There was a road sign that I really, really wish I would have gotten a picture of on this particular road. It was just a simple rectangular sign, black writing on a white background:

Just generalized danger, I suppose. Words for all of us to live by.

• This isn’t a particular image from that one car ride, but one that has applied all through East Africa: you see guys holding hands all the time here. Its not a homosexual thing – friends just walk down the street holding hands. In fact, I’d wager that homosexuality is close to a stoning offense in many of the places I’ve been, so seeing guys (rarely women – just guys) walking around holding hands is a bit disconcerting.

“Not that there’s anything wrong with it.”

• One of the other sights you encounter on a regular basis is women walking around carrying baskets or other large objects on their heads. It is amazing how they can keep this stuff balanced on their heads as they walk around. Some of the baskets or whatever are really damn big, and must occasionally weigh a lot. And for the most part, they walk around without ever using their hands to keep things balanced.

On the this road I saw a variation of this that I hadn’t seen before. There was a middle-aged woman walking down the road with a large woven basket on her head, practically overflowing with corn. It had to have weighed more than 20 pounds. Her left leg was amputated above the knee. She was walking using crutches in both of her arms. Amazing balance.

• Another one that has nothing to do with this particular car ride, but my mind was wandering when I was making notes. Ugali. You just have to try it. Try to make sure that there is some sauce with it that gives it some flavor though.

• And some of the roads lately (not this one, but I’ll put this comment here) have been horrible. Simply horrible. I’ll write about one of the overnight bus rides I took separately, but one of the general observations I want to make is that although the roads are poor – and as a result, your vehicle is rarely traveling that quickly – there are speed bumps all over the place. Your car or bus might only be going 25-30 miles per hour, but anytime you get near any populated area you are going to have to go over a speed bump about every 100 yards or so.

It’s obviously a good thing that there is a concern for public safety, but if you are in the back third of a bus (none of which have any suspension after getting assaulted on these roads), you get a little sick of getting tossed about so often when banging over these speed bumps. And while we are on the topic of public safety – speed bumps area good start, but perhaps the same governments that are mandating those might want to think about a little stricter licensing policy before letting some of these folks loose on the roads in the first place.

• Last observation for this post is another sign I saw on the road that I absolutely loved. It was the same as every single other side on the road. Same Coca-Cola sign (which is used for shops, groceries, bars – almost everything). Same block lettering. Same, small run-down building.

I’m still upset that I didn’t make Eyan stop the car. I would have liked to have met that store owner. And maybe bought something there – one can never have too much happy.

more random notes on Ethiopia, including some odd pirated DVD’s

Short (not) thoughts on a good dinner (Panama City)