It is a bit funny to me that I am writing and posting this particular blog on the day before the exact halfway point on my trip. Tomorrow, June 15th, I will have been on the road for exactly six months (though I’m seriously doubting that I’ll be able to make it all the way around, without using a plane, and make it back in a year). The conversation that prompted this blog happened on December 16 – the 2nd day of my trip. It has taken me that long to go through my notes and write this one. 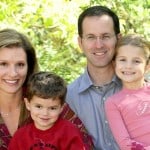 Pete and his lovely family

One of my good, and really smart, friends on this planet is a guy named Pete Kappler. Pete was one year behind me at the University of Texas at Austin. I can’t recall exactly how I met him, but I think it was because we were both chess players. Addictive chess players at the time. We met when I was a sophomore and Pete was a freshman.

Second semester that year, I took three classes. My grades: A, D, F. The only reason that I got a D, instead of an F, in that one class was that it was a Russian Literature class and the Professor was on exchange from Mother Russia. I took the first test (then didn’t show up for the second one or the final) and he didn’t think he could fail anyone that passed any of the tests.

The specific reason for that semester’s poor grades was that Pete and I, and another friend named Dave Rubin, played chess at my apartment about 14-16 hours every day. Well, not just at my apartment, we also played frequently at the Austin Chess Club, we formed the University of Texas Chess Club, and we played in tournaments all over Texas. I didn’t make it to class very often. I think Pete did a little better than Dave and I that semester, but I don’t think his performance was exactly stellar.

I had different reasons for poor grades in other semesters. Chess was just my addiction de jour.

Pete went on to graduate from UT with some sort of math degree, I think, and eventually went out to California and landed with Google. He ended up as one of their top programmers and eventually moved into a management position. He got married to one of the best women I’ve ever met, Jeri, had a couple great kids and moved back to Austin. I don’t have life envy of many people – but I’ve got more than a bit of life envy of Pete.

On the second day of my trip, I took a train from Dallas to Austin and Pete picked me up at the train station. We went back to his house, dropped off my stuff, and went out to get some dinner and drinks. We talked about Google, about married life on his part, single life on my part, about the Longhorn football team, and also about how both of us felt way too “plugged in” in today’s society.

We ended up talking about that last topic for hours over the next two days. Both of us are basically internet addicts. He at least has an excuse: his job. I, on the other hand, feel a constant compulsion to just see what is going on at all times.

The internet is sort of like heroin to me – and the needle is constantly plugged into my arm.

When I was back at home, I probably checked espn.com once or twice an hour – just in case there was some new sports news or analysis article posted that I wanted to read. Instant message program always on in the background. Clicking on the “check mail” button on my email program about every ten minutes or so. Reading an article, on whatever topic, and then clicking on every hypertext link inside the article that takes you to more content. News sites. Sports sites. Newspapers online. Blogs. Texas Ranger forums. You name it, I’m reading it.

Except I’m not really reading anymore. One of the articles I read last year (and I actually read it – the magazine in my hands, shockingly) was an article in The Atlantic about how our brains were being rewired by how we read online these days. Almost everything in this article applied to me.

The Atlantic Monthly — Is Google Making Us Stupid?

I don’t read anymore. Truly read, that is. I just skim. I’m constantly scrolling down to see what the next link is, or when the article is about to be finished. I’ll notice that I will ‘read’ 4-5 paragraphs without have any recollection at all of what I’ve read. I sometimes will read an entire article online, click onto something else, and then when I try to recall what I just read, literally ten seconds ago, can’t even remember the topic.

It’s particularly punishing to me because I used to be an excellent reader. I love to read. My book addiction is one of my longest lasting (and most productive) addictions of my life. I’ve probably got around a thousand hardcover books back at my house. When I die, the Fayetteville Public Library is going to throw a huge party in my honor after they get my bequest. In college and in the years I lived in D.C. (before the internet), I used to read for hours and hours and hours at a time. Every Sunday morning, I would go out and buy the New York Times and the Washington Post and read them from beginning to end, an effort that would usually take the better part of four hours. . . and lots of good coffee.

And as I told Pete, I think I’ve almost entirely lost the skill of concentrated reading. Last year, I took a month off to go to Nicaragua and see whether I could put up with myself for an extended period of time. A trial run for this trip. I took about 7-8 books with me, including some James Joyce.

I just couldn’t read it. I tried. I tried four or five times to get started with it, but the language was so dense, I just couldn’t manage to concentrate. I would read for a few pages and then realize that I had absolutely no recollection of anything that had just happened on those pages. I eventually gave up and just read all the other books I brought with me.

When Pete and I were talking about all of this, we found that we had both evolved – or devolved – in this same fashion. It was as if some of our intelligence was just slipping away, and neither of us were old enough for that to be the natural course of things. And Pete has a much big reservoir of intelligence than I do – I need every bit of rainwater I can hold on to.

I told him that one of the reasons I was excited about the trip was that it should offer me much more ‘slow time’ that I ever get at home. Times when I can’t just click a mouse and get on the internet. Times when there is nothing else to do than read a book or think about life, absent the ever availability of friends’ conversations. Time away from the phone. Away from work. Away from much of what had become my life. 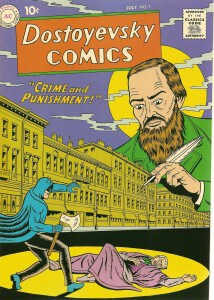 maybe I should have read the comic version (via artsjournal.com)

reconnecting with books. Big books. I knew I was going to read a variety of things that were easy reads, but I promised myself I would make one last effort to tackle some of the classics. Crime and Punishment was the big one I brought with me. As I told Pete, if I managed to make it through it, so much the better. But if my brain was so fried at this point that I just couldn’t read at that level anymore, this was the time to figure that out. I wouldn’t be happy if my big reading days were over, but I was content with that possibility.

I’ve made it through about half of Crime and Punishment so far. I was generally right about having more slow time – and removing the availability of distraction has helped a great deal. Its not easy and currently I’m reading two other books instead, but I will finish the damn thing before I get to St. Petersburg. And I will walk around that town with Crime and Punishment in my hand, opened to the map in the beginning, and attempt to find some of the landmarks from that book. I would have never guessed that day will be one of the highlights of the trip, but although I’m not there yet, I feel certain it will be.

And then pick up another book of substance. Because rebuilding one’s brain in the 21st century is going to take some concerted efforts. I better get to it while I’ve still got a few synapses available to fire.

6 thoughts on “Plugged in and unplugging in today’s world”