If you are looking for a short break somewhere in the British Isles, then why not consider a weekend away in the beautiful Devonshire city of Exeter. Exeter hotels and travel to and from the city can be found at very reasonable prices and with so much to do you will be rushed off your feet to fit it all in.

The newly redeveloped Exeter Quay area is the perfect place to relax and explore on a summer’s day. Just a ten minute walk from Exeter town centre, you will find yourself amongst a great selection of restaurants, galleries and shops – all overlooking the river Exe. The Quay also plays host to a number of events throughout the year, including Dragon Boat and canoe races. 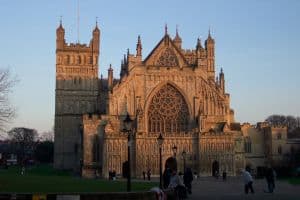 For those of you with an interest in history, a visit to the imposing Exeter Cathedral is a must. Completed in 1400 the Cathedral has many notable features, including the oldest complete set of Misericords and a stunning astronomical clock that dates back to 1484.

Although the Cathedral was damaged during both the Dissolution of the Monasteries and the air raids brought by the onset of World War 2, it has been expertly restored and reconstructed, with one of the most striking features being its imposing vaulted ceiling.

One of the best ways to discover Exeter, one of Britain’s oldest cities, is by the fantastic array of completely free guided walking tours. These tours are provided by the council, require no booking and cover a wide range of interesting subjects – from ghost walks to children’s tours there really is something for everyone. The tours generally last around 90 minutes and begin outside the Royal Clarence Hotel or from the Quay House Visitor Centre.

Another great insight into the history of Exeter is a trip beneath the busy streets of the city to discover the vast network of medieval underground passageways. Dating back to the 12th century, the series of passages under Exeter high street were built to hold the water pipes that brought fresh water from the river Exe to the city.

The Butt’s ferry is a unique variety of ferry that crosses the River Exe. The ferry is hand operated by the use of a cable and has been in use since the 17th century. A novel way to cross the River Exe and as one of only a handful of this type of ferry still in use in Britain, it is certainly worth a look.