Skip to content
Home » Destinations » Africa » Kili and my Tattoo

Climbing Kilimanjaro was the most difficult, and best, thing I’ve yet done in my 42 years. It was simply incredible. Given that I’d made a promise to myself that I’d get one tattoo per continent, my choice for Africa was simple — I needed a tattoo of Kili. 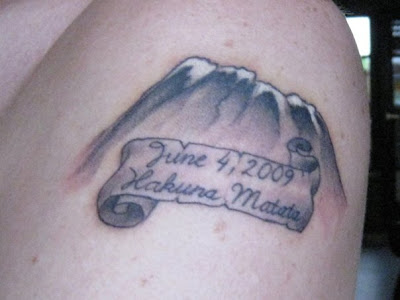 So, here is the explanation of this particular tattoo. First, I got it in Budapest. I wanted to get it in Cairo, but by the time I found a tattoo parlor there, I was leaving the next day to go to Dahab to go diving and I clearly didn’t want a new tattoo combined with underwater activities.

The route I took (Marangu) is considered the easiest, since you sleep in huts every night. It is also one of the fastest routes up and no doubt the most crowded, though there were only about twenty people trying to summit the night we went to the top. On this route, you leave your last hut at midnight or so, in order to try to make the top of the mountain at sunrise. The tattoo has the date that I made it to the summit and also the Swahili phrase, “Hakuna Matata.”

At this point, it is only appropriate to insert the reason this phrase is most commonly known in the United States, via a movie that I’ve never seen, but heard was quite good — The Lion King.

Of course when I posted a picture of this new tattoo on my Facebook page last year, I immediately got harassed by my wonderful friends and their truly unique sense of humor. A lot of comments along the lines of “trolling the school yards, these days?” Quite comic.

Here’s the real story. My guide was a great guy named Eyan, a local from the village immediately outside the Marangu gates. In fact, after we came down from the mountain, we had lunch at his family’s house before heading back to town. He was/is a totally relaxed guy that has gone up the mountain some 200 times or so. Dreadlocks. Chill. Supportive. Everything is going to be just fine.

Ergo, hakuna matata, which roughly translates to “no worries.” During the two days we were hiking, before the summit night, Eyan would occasionally toss a ‘hakuna matata’ my way and I return the same. The hiking wasn’t too difficult in the beginning, but I was starting to feel the altitude as we got higher.

I told Eyan on the day that we were hiking up to the last hut (Kibo) that since I wasn’t feeling altitude sickness and was in pretty reasonable shape that I was going to make it to the summit. No excuses. No turning back. Doesn’t matter how long it is going to take. I also told him that I might end up swearing at myself repeatedly and directing a little self-abuse language at myself, and the mountain, to try to spur me on to the top.

So on the last night, you leave around midnight and climb pretty much straight up 1,000 meters or so, until you get to the top. It was a really tough climb, at least for me. And Eyan was the best guide of all times. Encouraging me. Reminding me to walk slower. Ignoring me when I obviously didn’t want to talk. And probably my favorite on the way up:

Me after screaming obscenities for the last hour at myself and the mountain: “Hakuna Matata.”

O’ yea, we had a theme phrase now. And there was no doubt I was making it to the top with that inspiration. Though I didn’t think that probably should be immortalized on my shoulder for all time. 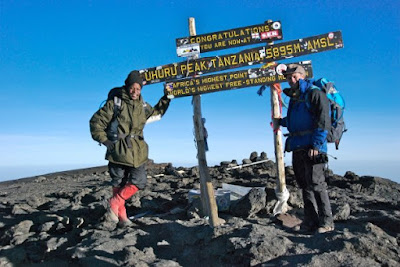 perhaps the most meaningful picture of my whole trip

Visa Day Two – in Nairobi, looking for the Sudan visa

Best Travel Photos I Have Taken on My Journeys

12 thoughts on “Kili and my Tattoo”