On the eve of me getting back on the road — and being pretty damn excited about it — thought it would be a good time to highlight some of the things that I find not-so-great out there on the road, since most of my friends seem to think most everything is wine and roses out there. 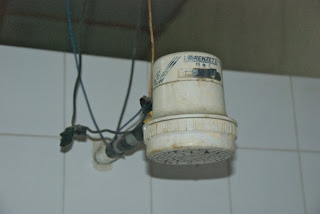 (1) Widow Makers. You don’t run into these too often, but the name pretty much describes the experience. You are looking at a shower head in Central America. The warm water is provided by a basic electrical coil contained in the shower head. Yes — electricity plus water. I think I got a C- in high school physics, but I feel pretty sure that this is not a combination that you should feel overly confident about.  As a result, though I don’t remotely believe it, cold showers are actually better for you.

(2) Visas. Hell, just border agents in general. As an American, I should be the last person complaining about visas and border crossings, because frankly, entering my 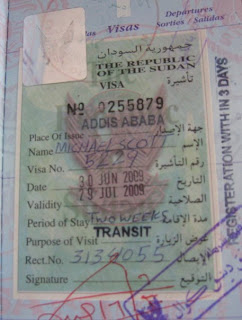 country is the worst. The worst. So every time I have a problem at a border or have to pay $100 to get into a country, I take a few deep breaths and say to myself, “it’s worse for them to come into my country.” Then I get pissed off anyway.

(3) Loud and rude people in dorm rooms. I wrote an entire blog about the hostel/dorm rules, so I won’t go over them all again, save to highlight one of them: we are all sleeping in here. It is 3:30 a.m. I’m glad you had a great night out, but please try to show some respect when you crawl your drunk ass back into the dorm room.  Just be prepared for me to exact my revenge if you violate the rules.

(4) Know-it-All’s. Happens at home also, but the road variation is the person that keeps one-upping your trip stories or craps on your future travel plans. “Well, if you want to go to Cuzco, that’s fine, but if you want a real taste of Inca culture, instead of that touristic garbage, you should go to…..”

(5) Abject poverty. Don’t want to make this one controversial, so let me preface it by explaining one of my philosophies that I’ve come to have as a core belief because of travel: we are all (at least those reading this, most likely) just damn fricking lucky. Our souls just happened to pop out in the United States or Canada or Western Europe or Australia — at least that is where almost all my readers are from. There wasn’t anything to account for that other than dumb luck. Given the population disbursement around the world, we were all many times more likely to be born in a 3rd world country, in abject poverty, with a crappy government and infrastructure, poor schooling opportunities, and little chance of moving up the ladder. We all ought to wake up every morning and just thank the big He/She/It in the sky that we were all lucky enough to arrive where we did.

That being said, what gets to me on the road is how many people are born without those possibilities. How many Einsteins or Churchills or Hemingways or Hawkings have been born out there and just withered away, because they had no access to education, infrastructure, and resources to develop their talents?? The mental resources that we waste as a planet just depress me. As do the direct effects of poverty — deforestation, environmental problems, short life spans, crime, mistreatment of women. Arrrrrggggggg.

To be clear — and to hopefully avoid lots of negative comments — I’m not saying that people in the 3rd world can’t lead happy and productive lives. Some of the happiest people I’ve seen on the planet are poor as dirt. On many days, I wish I was as happy as the kid playing with the stick and the tire on the side of the road…. but I’d also like him/her to have the opportunity, if they want to take it, to get educated, acquire some basic necessities, and perhaps change the world for the better.  Related to this is dealing with begging in the Third World.

(6) Getting ripped off. On the opposite end of the scale, I can’t stand getting ripped off, even it it is just for a couple bucks. It isn’t the money — clearly, paying $3 for something that locals pay $1 for isn’t that big a deal (and might actually help issue #5 in a small way), but I think it is the attendant implication of my stupidity that bothers me. Yes, I realize that you are ripping me off, Mr. Shop Owner. Not all tourists are blissfully ignorant rubes, there for you to pluck like ripe fruit off a tree.

And what REALLY annoys me on this front is when I get quoted a price for something that is eight or ten times the proper price. Look — I expect that you are going to quote me double. That’s fine. When I’m in a patient mood, a little bargaining is part of the fun of travel. But don’t jack up the price to ten times normal, and then when I laugh at you, cut the price down by 80% to get to what should have been your starting price. I refuse to even bargain with you, seeing as you just basically told me, via your price, that I’m the dumbest person you’ve ever seen. Piss off.

(7) Cab Drivers. A specialized subset of #6. I have a true hate/love relationship with cabbies. I despise 90% of them and want to line them all up against a wall and pull a scene from a Quentin Tarantino movie on them, but then one of them completely and totally saves my ass and I mentally reprieve them all. Then the vicious cycle just starts up again.

(8) The price of books. This literally amazed me. Books are ABSURDLY expensive throughout the world. I’m not talking the expense of buying and English language book in the middle of non-English speaking countries here — I expected those prices would be high. I’m talking about the prices of English books in countries like Australia and New Zealand. Or of Spanish books in South America (not that I could read them anyway). Stunned me. Well, except for SE Asia, where you can buy illegally photocopied books at cheap prices. Then again, you can buy about any intellectual property there at pirate rates.

(9) Everyone speaks more languages than me. I’m an American, which basically means I speak English. That’s it. I’m not banging on my country here — there are some good reasons we don’t speak foreign languages here — the primary one being that the US is damn big and English is the language throughout. If I had clients in Texas and they spoke a different language there (like most Europeans find, when they go 300 miles to do business with someone), I’m sure I’d have a lot better language skills.

(10) The search for a good cup of coffee. You wouldn’t think this would be that difficult a task, but ‘o my, it can be. Even in some of the best coffee producing countries in the world (Panama and Colombia off the top of my head), it is tough to find a good cup of Joe. Most countries export their good coffee to…. the US, Japan and Western Europe. Pretty much around the world, you are going to be drinking instant coffee most mornings. I hate instant coffee.

Instant coffee verses cabbies. Now there is a battle that I might pay to see.

That being said, damn do I feel inferior when I’m traveling and run across pretty much anyone, seeing as most other travelers speak three or four languages. If I could wave a wand and have any knowledge immediately implanted in my head, it would be the full working knowledge of a couple of foreign languages.

Hmmmmmm. I know I’ve got a lot more of these small and large pet peeves, but can’t think of any more off the top of my head. Then again, I’d love to hear your contributions — what is not-so-great on the road in your eyes, fellow travelers?

How To Be An English Speaking Tourist Without Being A Jerk