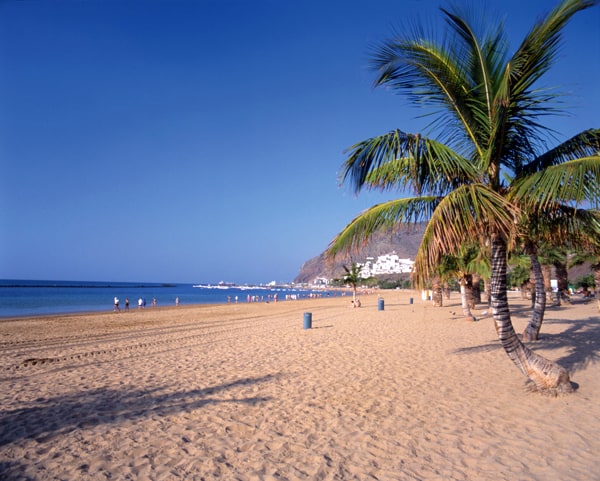 As I line up my shot, a tanned, hairy arm intrudes on the scene. Through the camera’s eyepiece I watch the arm grab a camel coloured kid by the scruff of the neck and yank it into the air.

“Noooooooooooooooooo,” the surprised baby goat cries, at least it certainly sounds like that, as it’s carried to the harbour where it is unceremoniously dunked under increasingly murky waters that only a couple of hours previously would have been described as azure.

The half-drowned kid is released to wander back up the beach bedraggled, bothered, bewildered and possibly even a little bewitched. A couple hundred dry goats on the beach watch its progress anxiously; aware that each and every one of them is about to experience their annual dip in the briny.

El Baño de las Cabras (bathing of the goats) in Puerto de la Cruz, on the Canary Island of Tenerife, is one of the more bizarre traditions on an island that boasts more fiestas than there are days of the year. One municipality alone—and there are thirty others—claims to celebrate more fiestas than anywhere else in Spain with at least 80 taking place throughout the course of a year.

El Baño de las Cabras, held on Midsummers Day morning (24 June), has its roots in a tradition that was carried out by the Guanche Indians who inhabited Tenerife before the conquistadors came along 500 years ago and claimed the island for Spain. It’s believed the Midsummer water has magical qualities and that bathing livestock in them will guarantee animals’ health and fertility.

Many onlookers who stumble onto what looks like a scene of goat genocide in the town’s pretty little harbour don’t know whether to laugh or be horrified. But the herds of goats that fill the tiny beach represent a livelihood for the people who are dunking them; they’re doing what they sincerely believe is good for the animals. I believe them; partly because I see logic in the tradition – seawater has cleansing properties – and partly because I’d just experienced the human version. If it’s good enough for humans, it’s good enough for goats.

Midsummer Eve in the north of Tenerife is party time. In Icod de los Vinos, local lads jump over bonfires for luck and virility—not so lucky if they misjudge their jump. Whilst on the beaches near Garachico the scene is more tranquil with rows of mini bonfires that create a romantic sunset scene.

The biggest celebrations are at Playa Jardín in Puerto de la Cruz where the number of people on the beach threaten to outnumber the grains of sand. It’s a massive beach party with local womenfolk decorating holes in the sand with hibiscus and bougainvillea flowers to bring good luck, whilst the men throw slabs of meat onto disposable barbecues. As the early evening turns into dusk and then night, the setting sun is serenaded by Canarian folk music (a unique mix of Spanish, African and South America influences) whereas darkness prefers more rousing Spanish rock anthems.

When Midsummer’s Day is greeted by a firework display, everyone on the beach strips to their swimwear and heads for the sea to bathe in the magical waters. It’s pitch black and sometimes the Atlantic rollers are boisterous but it doesn’t deter anyone from their ‘lucky’ dip whether they’re toddlers (mum or dad in attendance) or tipsy grandmas.

The reward is a year of good health, heightened fertility and the promise of finding true love.

Although I like weird and wonderful rituals, I don’t believe in Pagan traditions. But every year I make the journey with everyone else… just in case.

As I feel my way in the darkness and the cool water slaps at my thighs I steel myself for my ‘dunking’ and always think how lucky the goats are; they’ve got someone to steer them safely in and out of the sea.

Us humans are all on our own.

Exploring Tenerife, The Island That Has It All