My alarm goes off.

It’s 1:30am here in Tilicho Base Camp, and it’s time to get up for what’s sure to be one of the most memorable mornings of our lives. I packed a small bag full of camera gear last night, and I’m ready to go. Danielle, my girlfriend and travel buddy, has agreed to come with me on this morning’s crazy adventure. There’s just one question on our minds: should we?

I step outside. There’s a mist that’s too thin to be fog yet too thick to let me see stars. I can’t really tell how high the mist goes, but I think I can make out some peaks high above through the darkness. We’ll be heading up there this morning, and with any luck our efforts will be rewarded with a beautiful sunrise on Tilicho Lake here in Nepal. Few people have ever seen Tilicho Lake, one of the highest altitude lakes in the world at 16,200 feet (4910m) above sea level. Even fewer have seen it at sunrise.

Still, I’m not sure. We’ve never walked this trail before and if it’s anything like yesterday’s hiking, much of it will likely involve tiptoeing on twelve inch wide paths with steep 45 degree sloped drop offs, complete with rocks and rubble ready to fall from above at the slightest disturbance. The terrain is hair raising in the clear light of day; crossing it in darkness doesn’t sound particularly fun at all. Then there’s the altitude. Here at Tilicho Base Camp we’re at 13,800 feet (4200m), as high as we’ve ever been outside of a jet airliner. Yet we still have another 2,300 feet (700m) to climb on a path that’s sure to be almost entirely uphill. Most agree it takes about 3 hours. If we’re going to see the sunrise, we need to leave now.

I shine my flashlight forward. The light is rapidly attenuated by the mist and I can only really see about 20 feet in front of me. I point the flashlight down to see what lies in the darkness just inches to my left and I see nothing. It’s an empty abyss that goes as far as my imagination. I can hear the river, previously at our altitude. It’s far below us now, the sound of its rushing water muted by distance and clouds. 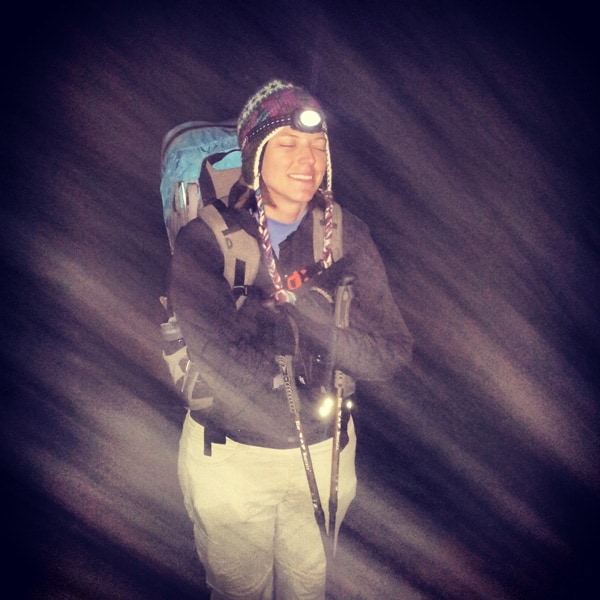 Eyes closed so as not to ruin her night vision as mist goes by in the foreground. We took a few pictures on this break, but not many more on our way up.

Danielle is behind me. I see her headlamp floating, rhythmically swaying left and right as she takes careful steps to follow. I want to make sure she’s okay because our headlamps aren’t powerful enough to pierce through the mist and lend much contrast to this small, rocky trail. Without enough light, it’s impossible to differentiate between the path and the dropoff. This was probably a stupid idea. We develop a system whereby I quickly pace ahead in the darkness to a relatively stable spot, turn around, and illuminate the path behind me with my stronger hand torch such that Danielle can safely catch up. We repeat this on all slopped parts of the trail. This takes a while, but it’s okay because we need to go slowly at such a high altitude.

I’m a bit winded and slightly dizzy from either the altitude or all that turning around or from the near sensory deprivation we are presently trying to navigate. I tell myself if I need to fall, lean in toward the hillside. I can only imagine what Danielle is thinking. I ask if she still feels okay about all of this, halfway hoping she’ll say no so I don’t have to be the one who wusses out. I tell her it’s okay if she wants to go back as it was probably a stupid idea anyway. She agrees that it is stupid but we’re here and we’re making progress, and why come all this way to just go back? We’ll have to repeat the process on the way down, so we might as well keep going up. So we keep going up. 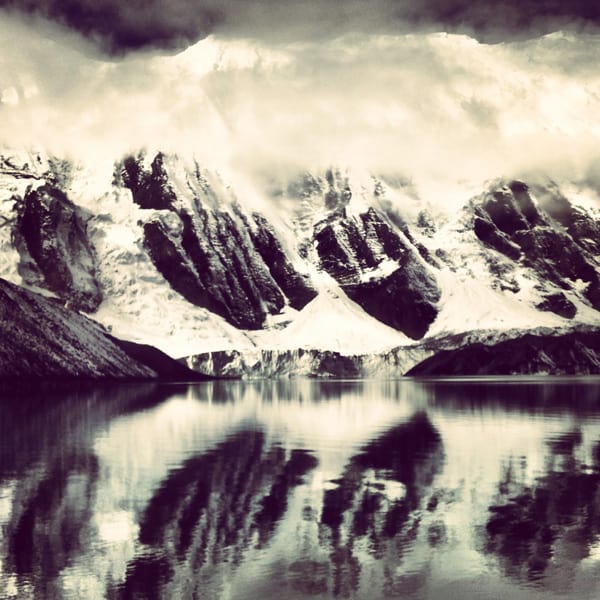 Instagram: Detail of the Grande Barriere on Tilicho from later that morning

I periodically shine my flashlight up the hillside to my right for two reasons. For one, I want to see if there’s any hope of an end to all this mist. But the light continually fades well before any end can be found. The second reason is for safety. We keep hearing crashing, cracking sounds which I can only guess is from landslides at some unknown location ahead of us. I see no rock movement though, so we continue forward.

Pointing my flashlight up into the blackness, I suddenly see two eyes glaring back at me. I stand there, surprised at how calm I am, wondering what kind of animal it is and what I should do about it. Danielle soon sees it too and I can tell she’s shaken. I’d rather ignore it and continue on, but Danielle would rather turn around and make a run for it. The animal gets up before we can decide on a plan of action; its eyes remain fixed on us. My exterior facade of calm inexplicably remains as adrenaline begins to flow inside. We had previously heard a story of a snow leopard on Tilicho sprinting full steam toward a tent, while the occupants frantically closed their cover and hid inside. I would love to see a snow leopard in its element. But I’d rather not see one while we’re standing on such a narrow pathway on such a dark night with such a steep falloff to our side. Funny how the mind assumes the worst in the absence of more evidence.

And so we stood there, leaving our future to fate because there wasn’t much we could do about it at this point anyway. The animal got up and gained definition as it turned its side to us. It looked to be just a deer with not a worry in the world, and certainly without any concern for us. Danielle asked me not to shine the flashlight up the hill any more. I resolved to continue doing so in case of rock fall and in hopes of seeing an end to the mist, but to no longer point out any pairs of eyes I might find staring back. Onward we went. 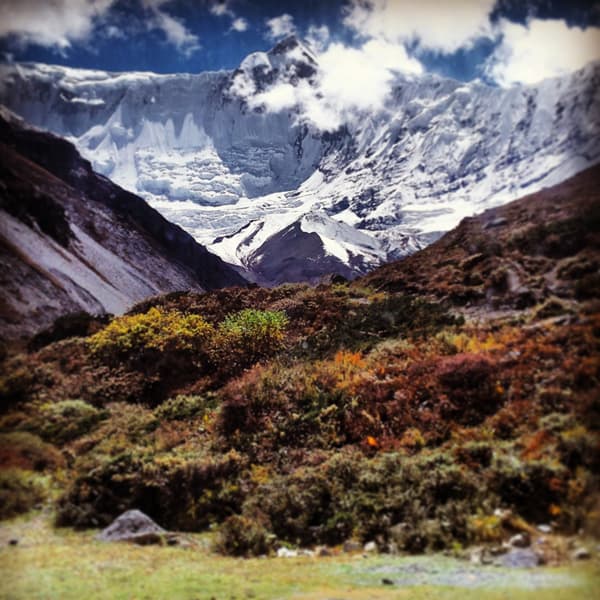 Instagram: View from Tilicho Base Camp in the daytime

The path eventually transitioned from steep, rock covered inclines to more solid dirt ground. This welcome change was met with additional challenge though, as the formerly straight line ascent turned into a series of switchbacks. No longer were we covering any ground forward; instead we were quite literally pacing back and forth and going nowhere but up. There’s something psychologically challenging about knowing you’re not covering any distance, rather just ascending in place. My flashlight could discern only the switchback directly above us before being dulled by the mist, and it was impossible to know how much farther we had to go.

We were forced to take more breaks as the altitude increased toward 16000′. It’s hard to maintain much of a pace up there – just putting one foot in front of the other is a small victory in and of itself. Slowly we went, and our perseverance began to pay off as the path eventually changed from switchbacks to a straight away. The sound of the rushing river far below us faded away completely, and I knew we had finally leveled off at what was likely the last major turn before seeing the lake. 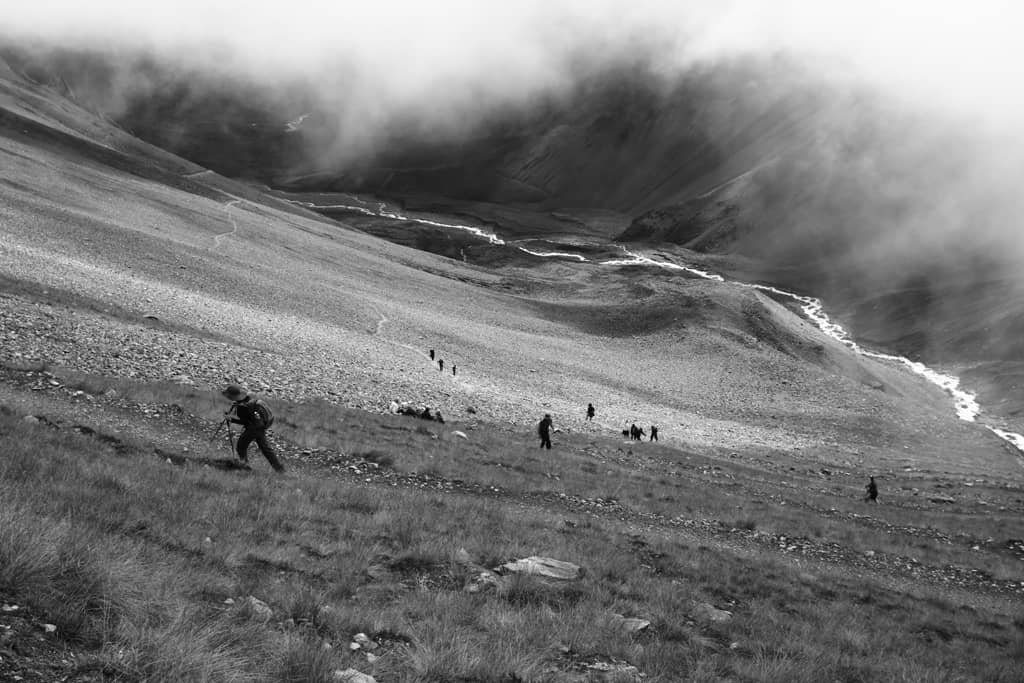 Switchbacks leading up to the lake, I shot this later in the morning as we headed back down

And then we were there

By now it was well enough into morning that the darkness had seceded to a glorious dull blue which enveloped everything in an eerily peaceful light. Even after climbing for 3 hours, the mist was still there and I knew my chance of capturing dramatic sunrise photos was not good. But just being there was an experience in an ethereal, otherworldly sort of way. There was a quiet peace found in being in such an exotic place at such a high altitude, so far from home and having spent nearly two weeks walking there from where we left vehicles behind at the start of our Annapurna Circuit trek.

The sunrise did indeed leave something to be desired, but the experience did not. And the added benefit to having left at 2am was having the lake all to ourselves. I will not soon forget watching the blue light change to grey and finally giving way to daylight on this remote Himalayan lake. 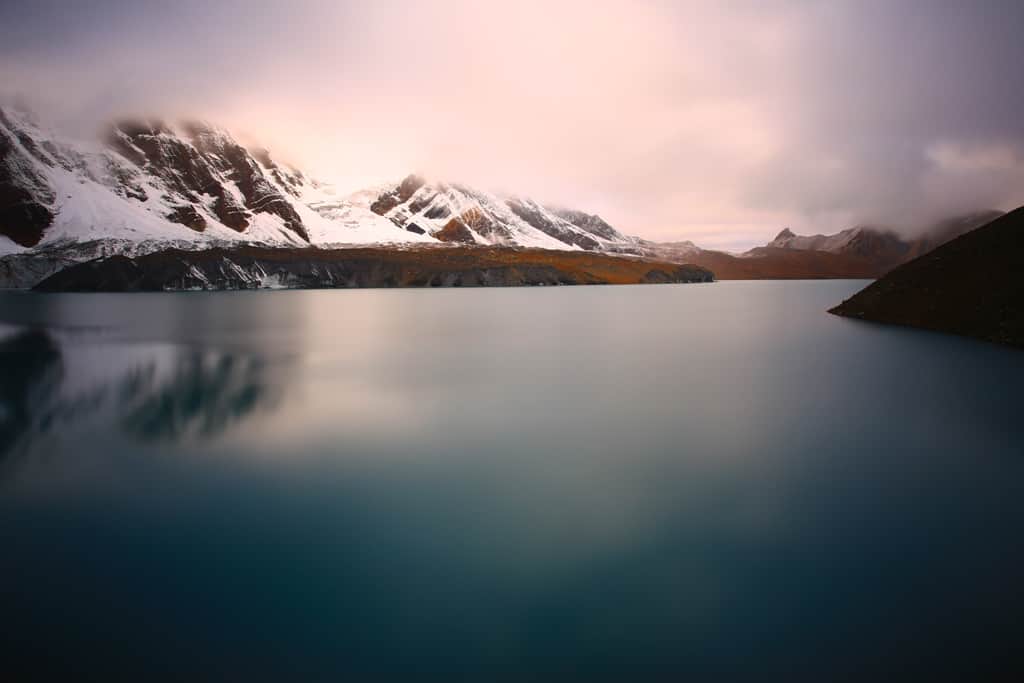 Long exposure of Tilicho Lake at sunrise on a cloudy day

I’ll be giving a lot of coverage to the Annapurna Circuit in the coming weeks. Make sure you’re following me on Facebook if you’d like to see all the latest photos and stories!

Victoria Falls and the Lunar Rainbow

35 thoughts on “Visiting One of the World’s Highest Lakes”