Cambodia is more than just Angkor Wat and the Killing Fields. Yet, when most travelers plan their trips to Southeast Asia, Cambodia is either skipped completely or reduced to a sunrise over the five pine-cone-shaped spires of Angkor Wat and “A day of death,” the crass lingo multiple tourists have used to describe their itineraries that included visits to the notorious S-21 and Choeung Ek in Phnom Penh.

As an avid surfer who rode the best waves in Bali, and a dedicated foodie who ate to his stomach’s content in neighboring Thailand and Vietnam, Cambodia, which lacks waves and gastronomy, was my favorite country in all of Southeast Asia. And it had little to do with Siem Reap or Phnom Penh.

Here are five ways to get off the beaten path in Cambodia:

Kep is a small town in the Southeast corner of the country, where lush jungle borders the sea. While I’ve never been keen on the idea of driving a motorbike, and had convinced my wife that we did not want to look like the countless Westerners limping across Southeast Asia attired in full-body casts or wincing through road-chafed faces, the empty roads around Kep, which resembled scenes from a tropical retelling of “The Motorcycle Diaries,” and the location of a nearby killing cave that I wanted to visit for my book, Traveling the Cambodian Genocide, had us driving the beautiful countryside.

Kep is also the gateway to Rabbit Island – where day-trippers can sway in hammocks and sip back cold Angkors after jumping in the surf, and lodgers can stay in the dozen primitive huts that dot the beach – and home to the crab market, stocked with Cambodia’s best seafood. (A plate of one dozen crabs costs about 10 bucks.)

Note: If you cross into Kep from Vietnam, the southernmost border crossing is without traffic. Though be skeptical of the transportation you arrange in Chau Dac. I had booked tickets to Kep that included a bus to the border and a transfer to an air-conditioned van. Our van turned out to be two motorbikes (which at least got me comfortable with the idea of renting bikes in Kep). Make sure to bring cash with you, since at the time of my visit, there were no ATMs in Kep and Cambodia does not accept or exchange Vietnamese currency, legally.

Hire a Tuk Tuk for the Day

One of the highlights of Cambodia is meeting the people. After years of living in a country plagued by genocide, civil war, and a corrupt, oppressive government, the Cambodians somehow find a way to be optimistic and lovely.

Not only is hiring a tuk tuk for the day ridiculously affordable (and more romantic than a gondola ride in Venice or a crowded floating market in Thailand, if, that is, you escape the city), but drivers will often double as tour guides and provide a first-hand perspective on life before, during, or after the tragic ’70s.

One of the best ways to access their personal histories is to invite the driver to lunch. (It only tacks on a dollar or two extra to your expenditures.) Each time we dined with our driver, they shared their incredible and often sad stories. When we visited Phnom Sampeau – where beautiful vistas from temple-topped mountains are proximal to three killing caves – one of our drivers, instead of lounging in his tuk tuk and catching up on sleep, spent the afternoon hiking with us, sharing with us the history of the place, and telling his personal story. There wasn’t enough time to finish his story atop Phnom Sampeau, so he invited us back to his house to meet his family and tell the rest.

Ride the Bamboo Train in Battambang 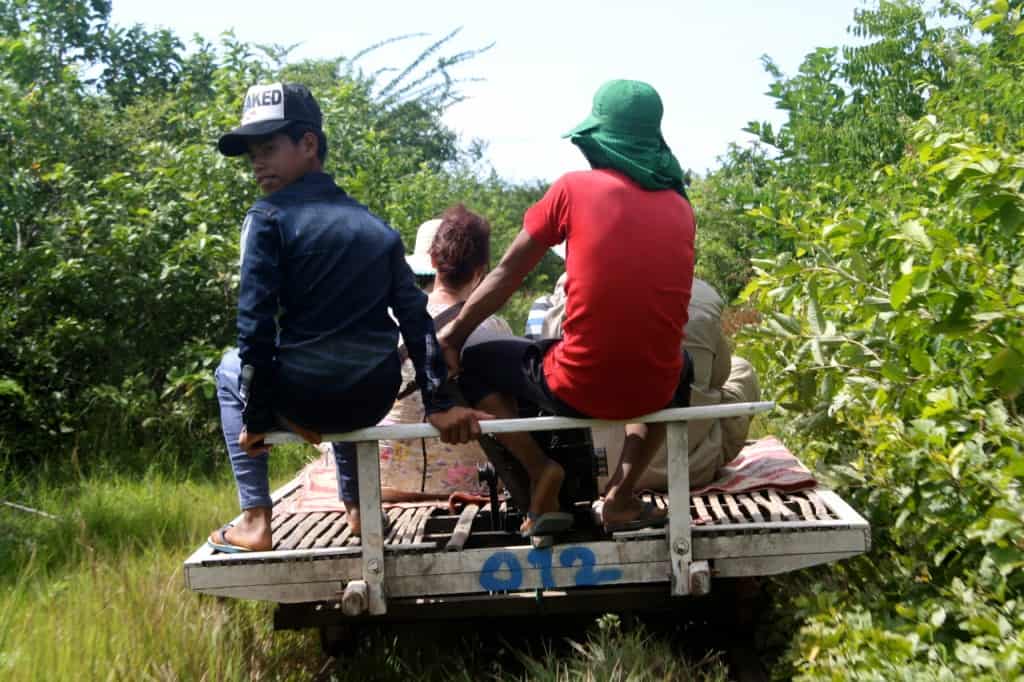 If you want to fly down twisted train tracks and feel like Aladdin riding a rickety, seatbelt-less magic carpet, head to the bamboo train outside of Battambang. These crude vehicles were created after the Khmer Rouge had left the country in shambles. At the time, Cambodians lacked a means to transport persons and goods, so they set bamboo pallets loosely atop steel axles and powered the contraption with old lawn mower engines. (Prior to installing engines, they propelled the carts forward with sticks.)

“Need to get off,” our driver announced after nearly creaming a suicidal dog. Two other bamboo trains had stopped ahead of us. Policy dictated that whichever side of the shared-track had less vehicles, those would be the ones to dismantle. I helped the driver break apart our bamboo train by tossing the pallet and the fifty-pound, barbell-like axles into the tall grass and then quickly reassembled to continue our death-defying ride.

Note: There are other hazards besides potentially getting launched from the speeding train or sprouting a hernia from lifting the axles. My wife nearly lost her head, twice: once to a truck’s bumper that, at the last moment, reversed off the tracks, and again to a cow that had swung its rear in front of our path.

Of course, you’re still going to visit Angkor Wat. That would be like traveling to Peru and avoiding Machu Picchu. (I’m guilty of that, but that’s another story.) While we did visit the temple complex by tuk tuk, as it’s the best way to arrive for the packed sunrise at Angkor Wat and the most efficient mode of travel for reaching the farthest, most intricate temple, Banteay Srei, renting a bicycle in Siem Reap was our best move. As many temples are crumbled heaps of rock or are so small that a quick drive-by would suffice, rolling up on bike and then quickly pedaling away made the most sense.

If you’re looking for a beach scene that’s less rustic than Rabbit Island, check out the ones in the Southwest corner of Cambodia. Sihanoukville has nightlife and a sprawl of beachfront restaurants populated with tourists. If you want sand and solitude, head down to the laid-back Otres, a few miles past Sihanoukville.

Cambodian Cities OTHER Than Siem Reap

Siem Reap, the Tourist Town that I Love