One of the things that immediately strikes you in almost any Third World country you go to is that amount of touts and hawkers that you run into. The vast majority of the places I have been to on this trip have people that fairly constantly 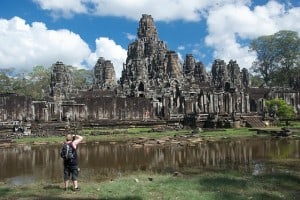 are coming up to you and asking if you want a taxi, tuk-tuk, bus ticket, bracelet, prostitute, meal, tour, and anything else you can think of. In addition to that, you obviously run into a huge amount of begging, depending on what country you are in.

There is a long-standing debate on what to do about this on various travel forums and in guidebooks. The general consensus that I’ve seen is that you should avoid giving money to people begging, even children.

I made the decision before the trip that I was never going to give money to anyone begging. It is basically the motto I followed when I was in Washington D.C. and one that I feel comfortable with. In D.C., I used to give money to the guys that were playing a musical instrument or telling jokes or something, but I’ve subscribed to the philosophy of “don’t just stick your hand out — do something for my money.”

On the issue of touts and hawkers, I frankly wasn’t prepared for the volume and intensity before the trip, but at this point, it is pretty much water off a ducks back. I’ve gotten so used to saying “no, thank you” over and over to people walking up to me that sometimes I accidentally say it to people that aren’t even coming in my direction to ask me for anything.

Southeast Asia is no better on this score, so far, than other places (though South America seemed a bit more mellow, looking back in hindsight). I’ve run into a number of travelers that got very annoyed with the persistence in Vietnam, but Angkot Wat rose to a higher level than Vietnam, in my opinion.

The temples at Angkor Wat are spread out over a fairly wide area. The main circuit of the most popular temples is north of Siem Reap and is about 30 kilometers around. I decided to rent a bicycle for a couple days and ride around to the various temples, instead of renting a tuk-tuk driver for the day. I was needing the exercise and the time alone to mull some stuff over. Plus, just didn’t feel like the interaction of a tuk-tuk guide. 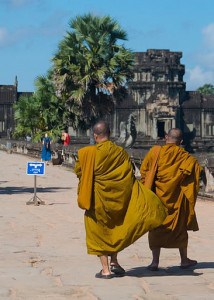 It was a couple long, and wonderful, days. The second day, I went ahead and just did the whole Grand Circuit, 30+ kilometers in 30+ degrees (Celcius — over 100 in U.S. terms) temps. I took a bunch of pictures and stopped a number of times at the various food shacks that are located at about every major temple.

As anyone would approach one of these areas, 7-10 women would come out of their shacks yelling at the top of their lungs “MISTER – eat here, eat here” or “MISTER — cold water? Cold water?” Easy enough to just through a ‘no thanks’ and ignore them, but kind of interesting in its frequency and intensity.

I stopped at one point and got some lunch and as soon as I sat down at a table, a half-dozen kids came up asking me if I wanted to buy postcards, or jewelry (“for your girlfrind!”) or other little trinkets. I politely told them all no – and a couple just stood around and watched me eat. One girl occasionally fanned me with a fan that she wanted to sell me while I ate.

I ate my meal, paid for it, and just as I was about to get up, she handed me a note that she’d obviously written while I wasn’t paying attention. On one side, it had a drawing of a flower with “for you” written on it a couple times. On the other side, she’d written:

“Hello!! Nice to meet you. I give you flower for your ___ [can’t read that word]. You are very nice and friendly. Nice to speak with you. Thank you for coming to see Angkor Wat. I wish you good luck with your job and your family. I hope to see you again – I hope you like my flower. I’m sorry to bother you – I like your smile. From, Heang”

She handed it to me with a smile and I just put it in my pocket, without reading it. When I pulled it out later that night and read it, I felt horrible that I didn’t buy anything from her.

First time I’d had a regret like that on the entire trip.

5 best ways to get off the beaten path in Cambodia

Siem Reap, the Tourist Town that I Love

13 thoughts on “Hawkers in Angkor Wat”