Skip to content
Home » Blog » I Went To Australia With No Money: My Working Holiday 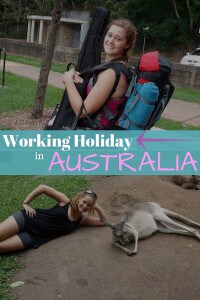 Thanks to having a wild need to make my dreams come true, a serious problem with impulse control, and a stubbornness that only my Mother would understand (because it totally came from her), I went to Australia with no money.

Is that stubbornness or stupidity?

Either way, I spent four gloriously challenging and wonderful months in Australia and thankfully, I had enough sense to obtain a Working Holiday Visa.

After about a month of being care-free beach bums, drinking cheap wine (which is lovingly referred to as goon in the Australian backpacker community), and exploring Brisbane City, my friend Elizabeth and I decided we’d better put those Working Holiday Visas to use.

We had a few different jobs including working at a hostel and working at an office. If you’re ever considering doing housekeeping at a hostel in exchange for free accommodation, I hope you have a solid gag reflex. Do you know what people do in those rooms?

I can’t go into too much detail about the office we worked in because I still, to this day, have no idea what our job was. We were calling people and trying to set up appointments for… something. The highlights of that job were learning what “how ya goin’?” meant and talking to a lady on the phone for half an hour about her garden.

Our first try at answering “how ya goin’?” was “um… we’re walking?” 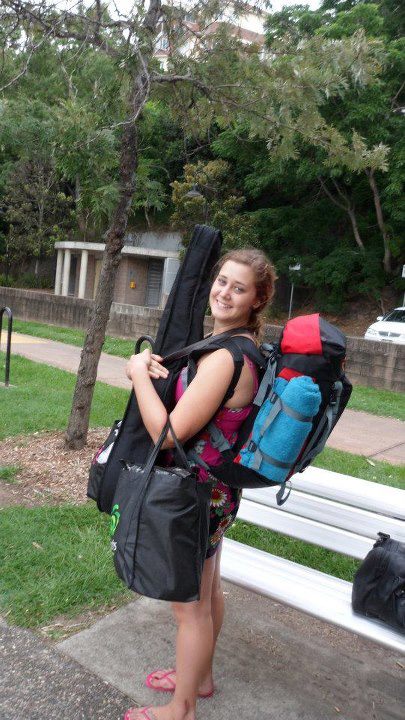 Apparently, no one wants to hire backpackers who plan only on making enough money to quit. Yep, that makes sense. We eventually both got hired to sell make up out of booths in various malls.

“Excuse me, Miss? Can I show you something?”

I rarely even wear makeup and certainly don’t know a thing about putting it on someone else. In our “training”, we were taught how to look someone up and down, point out their flaws, and tell them how our product will fix them. No thank you. I can’t.

They encouraged us to have fun with it. One time I said my name was Connie and (tried to) use a Deep Southern States accent. The customer actually decided to buy something and I got so excited that my accent disappeared.

It was a great way to meet people and learn about different cultures. Some of the people I worked with were from France, England, Israel, and Russia.

You’re Canadian? I hope you’re not lazy like most North Americans.

On my first day, one of the more experienced girls did my makeup for me. Afterwards, I hid in the bathroom for ten minutes. Was I a makeup sales person or on my way to the corner? Serious question.

The “boss lady” was Russian and terrifying. One time she took me on a walk right before a staff meeting. We crossed the street to go talk behind a dumpster and for a fleeting moment, I wondered if she might kill me. It turns out she only wanted to explain to me that she was going to get “a little angry” with the staff but that none of it was directed at me so I shouldn’t feel bad.

This resulted in her screaming for a good hour at the staff about how useless and insignificant they were. I quote, “You are nothing! Zero! You are worthless! You are NOTHING!”

Naturally, I cowered in the corner crying and was from then on known as “the emotional Canadian”.

The ‘boss man’ was from Israel but lived in the Los Angeles. He skipped around the booth telling customers they were fabulous and dished out wild giggly compliments. He was every customer’s best friend and the Pappa Bear of the staff. He’d come up to you after you made a sale and make you feel like you simply strutted out of your mothers womb with a makeup brush in hand. You applied foundation to the zit-infested population of this disgusting world beneath you and left a silk canvas in your wake. Good job, you.

When work was over and night fell he spat out his charisma like it was phlegm that had been building up in the back of his throat all day. He’d light a cigarette and sit around glaring at everyone with hate in his eyes. It was the first time I’d ever been scolded by an angry Iranian man while a terrifying Russian woman flailed around telling everyone how much they all sucked.

Luckily, he seemed to have a soft spot for Elizabeth and I and always made sure “his girls” had enough to eat and were happy. Maybe it’s because we clung to each other and cried so much.

Elizabeth quickly decided she had enough and left. I didn’t have that option because I really needed to make some money.

My acting skills can only take me so far. Eventually, I was done with being told off by everyone who walked by the booth. I don’t really blame them as I don’t like being on the receiving end of that type of sales pitch either. So, I gave up without admitting to my co-workers that I had given up. I’d lean out and quietly compliment people as they passed saying things like “Hello, I like your shoes” or a frantic, “Hi! I don’t want you to buy anything! I just want to say hi!” One lady stopped and whispered, “Are you okay? Do you need help?”

I’m such a drama queen.

My Grandfather had recently passed away and one day, an old man who looked like him was approaching. I smiled and said “Hello! How are you?” He snarled at me and said, “NO! Go away!”

Just like Ol’ Grumpa would have done. It made my day.

After that, I passed the days by trying to find other men that reminded me of my Grandfathers so I could say hello to them. It helped to make all the new and unknown situations seem more familiar.

Of course, no work meant no pay. I told them I was quitting FOUR times before actually leaving because on top of being emotional and dramatic, I am also spineless.

It wasn’t all bad! I woke my flat mates up every morning by pretending to be a singing unicorn; I spent Christmas day on the beach; I witnessed daily Jewish prayers and learned about the Tefillin; I saw a kangaroo in a mall parking lot; I actually managed to sell make up and made some money! 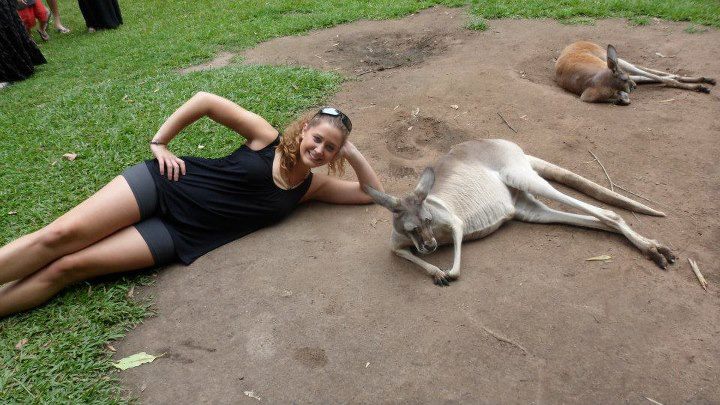 After I escaped (I mean quit, as it turns out I really WAS a makeup sales person and was not getting tricked into working at a brothel) Elizabeth and I decided that we could either keep looking for work in Brisbane or spend one month partying and then go home.

Bring on the party!

Funny enough, this experienced made me fall in love with travel. I don’t believe that travel is all blissful landmarks and sun shining selfies. Travel is facing constant challenges and overcoming them and that’s what makes it so rewarding. I love the unknown, learning new things, meeting new people, and finding happiness in all situations.

The lessons I have taken away from this experience are to always be financially prepared for travel, that I am not a sales person, that I do not have it in me to be intentionally mean to someone, and to smile at everyone because you never know who may be feeling lonely or scared and is looking for Grandpa’s face in the crowd.

One thought on “I Went To Australia With No Money: My Working Holiday”