After quaffing a few of the local shiraz in Napier, I was faced with a decision on how I wanted to proceed to see New Zealand. AC/DC was playing a big stadium concert over in Auckland and I had some friends I wanted to see there. But the weather report wasn’t that great and I figured some good, quality nature sightseeing on the spectacular South Island would be good for my soul, and my liver, so I decided to head down to Wellington and across to the south via the ferry.

With one intermediate stop, of course. During my various tastings in Hawke’s Bay, I had heard (OK, I asked, but same same) that there was a small village named Martinsbourgh in the southeast of the North Island that I should stop by to sample the excellent pinot noir. Since that is one of my current favorites, I thought it would be rude to just rush by and ignore the place.

I took a bus most of the way down from Napier, and then had my first hitchhiking experience here. (Hitchhiking and Niceness in New Zealand). The next day, I rented a bike and pedaled around in a slow, lazy square around Martinsbrough and tasted, and ate, at seven or eight wineries. It was the first time that I’d biked around to taste wine and I have to say it was a simply lovely day. Sunny, but not too warm. The tasting rooms were almost empty. The people pouring were very informative about their wines, and perhaps most importantly, the wines were great. Plus, not that I have the greatest palate to start with, the slow pace of riding a bike around helped keep my tasting ability up to whatever I possess in my unaltered state. And I had the false sense of satisfaction that I was burning off whatever calories I was consuming, though I must admit that calorific guilt isn’t one of the ones that has much of a grip on my conscience. 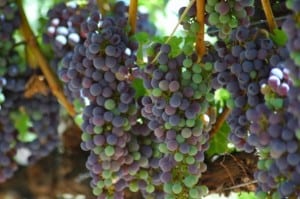 from this comes liquid heaven

The day after my full tasting day was the opening of a two-day fair in town. People came from all over the island to set up booths on and about the town square, selling all sorts of handicrafts and such, and it was such a big deal that all of the hotel rooms for miles around were booked completely, though I didn’t need to camp.  Not that I would have entertained the thought of sticking around a place where there wasn’t anything to do, save for to drink good wine and eat great food, for another few days, it was time to move along.

To Wellington, the capital of New Zealand, in order to randomly stumble upon the Wellington Seven’s international rugby tournament – one of the oddest unplanned treats on my long way around this planet.

Heard (and seen) at the Wellington Sevens Rugby Tourny