Time for a quick series of blogs on New Zealand, in a belated effort to sum up the two months I spent there – the longest time I got to spend on any country in this trip.

I ended up spending about a month on each island. My freighter from Australia dropped me off in a town on the east coast of the North Island, called Napier. Ironically, the only way I could have made it all the way around the world without flying was discovering freighter travel and the travel agent that set up all four of my ship legs lives and works there, so I finally got to meet him in person, after exchanging a few hundred emails with him during the last year.

I have a nice picture of Hamish, but alas, it is on my other computer. Will try to post later.

Napier was a place I had never heard of before in my life, and for the most part, there isn’t any reason I should have, but that didn’t make it any less interesting. Right up my alley, it is the main city in the Hawke’s Bay area, which is one of the better wine producing areas of New Zealand – a country with a hell of a lot of wineries in a relatively small area. The other point of interest for Napier is that it was almost completely destroyed by a huge earthquake on February 3, 1931. New Zealand has quite a volcanic and seismic history, as it is part of the “Ring of Fire” that circles the Pacific Ocean on both sides. 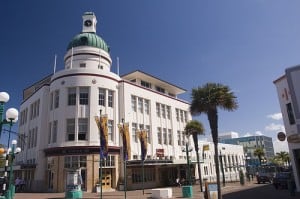 Napier was leveled in the midst of the Art Deco era, which wasn’t the longest lasting architectural era, and was rebuilt predominately in that style. It claims to be the “only entirely Art Deco” city in the world. I can’t say that I have any grounds to contest that bold, and unusual, boast. Regardless, it is a nice little town to wander around in, though the weather was rather poor when I was there (one of the many times that I apparently brought rain clouds to the supposedly sunniest place in New Zealand). They have an annual Art Deco weekend celebration in town on the third weekend of February, to celebrate the town’s overcoming the earthquake.

Unfortunately, I feel fairly confident that I ended up staying in town for more time than I originally anticipated because of the proximity of the wineries and the great food, and not the unique architectural stylings, but the buildings sure were mighty purdy. It is a city that I’d much rather just stay in and not bother camping nearby, for sure.