Skip to content
Home » Blog » Train from Christchurch to Kaikoura

I would like to introduce everyone to Caleb. If you want to be given some reasons to come visit New Zealand (which frankly, everyone should do at least one time in their life), there is no better ambassador than this particular 12-year-old Kiwi.

As much as I love trains, during the two months I staying in New Zealand, I was only able to take one train trip, which just gives me more reason to come back and visit another time in the future. The one short train jaunt I was able to take was an early morning departure from Christchurch up to Kaikoura, where I intended to try to do a little whale watching.

Some tangentia: I’m listening to Nina Simone’s song ‘Sinner Man’ right now, which reminds me of two entirely unrelated movies every time I hear it. First and most obviously, it is the song that is used during the incredibly well choreographed theft scene in The Thomas Crown Affair. Tangentia piled upon tangentia; very, very few remakes are as good as the original, but that remake is much better than the rather boring original, which can also be said for The Italian Job in recent years. Not many more examples of ‘better than the original’ come to mind for me, though as always, I’m open for comments/input.

The second thing that this particular song reminds me of is so obscure that I’m not even sure I am right, but I’ll go with it anyway, in the form of a question to ya’ll. No fair googling it – I’m in the middle of the Pacific and didn’t do so myself. I am pretty sure that Nina Simone is the musical reference made during a pretty fantastic breakup scene in a classic Bill Murray movie. Curious if I’m right about that. Now back to our regularly scheduled programming.

Caleb’s birthday was the day after our shared train ride. His mother, Jenni, was taking him up to Kaikoura to meet the rest of their family, who were all driving up from Christchurch to save money. As a huge train fan, his birthday present from his mother was the train ride. Through the luck of random seating, they sat opposite me over the table we shared for the ride up. His level of enthusiasm was inspiring. I wish I had that level of enthusiasm for. . . well, anything. Not that I remotely want to go back to that age, but being able to look upon it and remember was a nice belated, non-prime number birthday present for me. It was an exceptional few hours. 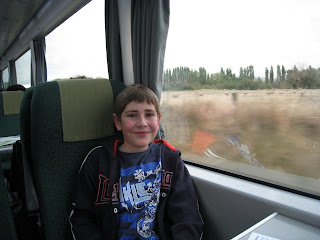 Caleb wants to work for the Department of Conservation (DOC) in New Zealand, which to my eyes, he seems already well qualified to do. He told me about the only native mammal of New Zealand, a small bat, whose name he knew, but I could not jot down quickly enough as he raced to the next highlight of “the greatest country in the world.” I was told of many things and places I needed to see: Stewart Island, the original steam train at Waipura, Doubtful Sound, Lake Taupo, and Mount Hut for skiing in the winter. He could have been a tour guide – hell, I’ve had far less informed tour guides plenty of times on my journey. His mother was concerned that he was rambling on, and he was, and tried to hush him a few times, but frankly, I wanted to hear everything he could throw out there.

There was an open-air car on the train that you could go to in order to get a better view of the passing scenery. As the train got close to our final destination, to a part of the track where it ran right next to the ocean, Caleb and Jenni invited me to join them up there to look for seals. As the fresh air whipped through the open cabin and the morning sun reflected off the Pacific Ocean, Caleb turned to me and said with the absolute certainty that only a twelve year old can muster, “New Zealand is the best place ever.”

5 thoughts on “Train from Christchurch to Kaikoura”