Te Anau is on the shores of Lake Te Anau, which is the largest lake by volume in New Zealand (bringing ‘ya the completely useless trivia). Continuing on the trivial water theme – Lake Te Anau empties into Lake Manapouri, which is only 10 kilometers from Doubtful Sound.

The lakes are at few hundred meters above sea level, and obviously Doubtful Sound is at sea level. Because of the height difference, they were able to construct the world’s largest non-dam hydroelectric plant.

Normal hydroelectric projects dam up rivers, create lakes behind them, and then let out water from the bottom of the lake through the dam passing through turbines, which rotate and create electricity. Because of the heights of these lakes, there was no need to construct a dam – they just dug a tunnel from the lake down to the Sound, and pass the water through turbines on the way down to create the electricity.

It not only is the largest non-dam hydroelectrical project in the world, it creates an absurdly high percentage of New Zealand’s energy, but of course I can’t find the exact number right now. I recall being told something like 60%. Manapouri Hydroelectric Power Station.

Te Anu is the gateway to Milford and Doubtful Sounds, which are two of the more magnificent natural wonders, in a country full of them, including some of the best camping the world.

Continuing with the trivia today – New Zealand and Norway are the only two countries in the world that have fjords, which are large, deep cuts of oceanside land carved out by glaciers. Sounds are actually something geologically different than fjords, but all the fjords in New Zealand were named “Sounds” originally, so the names stuck.

To rectify their vocabulary oversight, when this whole area was made into a huge national park and a UNESCO World Heritage Site, they named the area the Fiordlands, compounding their error by misspelling fjord. New Zealand’s Fiordlands.

Milford Sound is much more visited than Doubtful Sound. There is a road that heads north from Te Anu then turns west through the 1.2 kilometer long Great 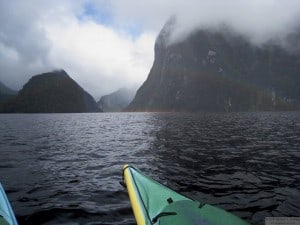 Naked Homer Tunnel Race — where they annually have the Homer Tunnel race each summer — which is a nude race through the tunnel. Runners used to be able to wear shoes or a headlamp, but after a few injuries, the rules have loosened up in recent years and you can wear both shoes and a headlamp now.

Some people race seriously, or at least as seriously as you can naked, and even more slowly race down with beers in hand. At the end, there is a naked Barbie doll and naked Ken doll given to the fastest female and male racers respectively. And a group photo of all the racers in their racing attire, of course. And no, I don’t have the imagination to make all of this stuff up. Naked Tunnel Race.

Instead of doing one of the many boat cruises or airplane tours of Milford Sound (the tiny little Milford Sound airport is the second busiest airport in New Zealand, only trailing Auckland’s for number of flights per year), I did a one-day kayak tour.

Obviously, you can’t see as much of the Sound at kayak speed, but you don’t need to cover much ground to appreciate the beauty of the place.  By the way, check out the sunrise on the way over.

The weather started nice enough for us, but the wind and the rain picked up as we started paddling out and it turned into a little bit of a dicey ride. No one flipped their kayak over, but the waves and wind made it some tough going for us novices. On the flip side, some dolphins swam with us for a bit and the sights were great. 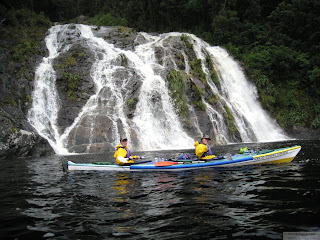 The next day I left for a two day kayak trip in the much less visited, and therefore much more peaceful Doubtful Sound, which was clearly my favorite between the two. It rained slowly but fairly consistently on day one, but the winds were down and we managed about 10 kilometers. We camped that night and there is only one thing anyone can remember about being on land in this part of New Zealand – sand flies. You have never experienced anything like them. ‘O, I know what those of you in Arkansas are saying – “there is no way they are worse than the mosquitoes in the Delta.” Well, I’ve been there, done that.

There is absolutely no comparison; the sand flies win in a bite-off. And it’s not even close. I’ve never been attacked like that in my life. Inside your enclosed tent or the permanent tent they kayak company had at the site where you ate and drank was safe, but expose any amount of flesh to these beasts in between at your own peril. 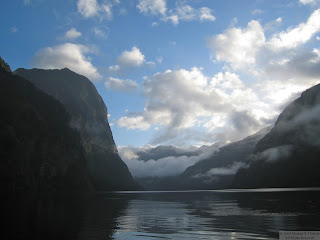 This is also the only part of the world I went to on this trip where I would give the following advice: you want to try to go there when it is raining. Clear, sunny, dry weather is fine – the landscape is fantastic to look at. But if you want to see the Sounds in all their glory, you need to go during or after a good, long rain. Since they are carved almost vertically out of the land, there is very little land on top of the mountains to hold water.

Sure, there are some small lakes and streams up there, which permanently provide a few waterfalls to look at while you are on the sounds, but during or immediately after a good bit of rain, there are literally hundreds of waterfalls. They come from everywhere. It is spectacular, though they dry up quickly.

At the end of day one of the kayaking on Doubtful Sound the rain stopped and day two was completely rain free. There were probably 90% fewer waterfalls visible on the second day compared to the first. Root for “bad” weather. 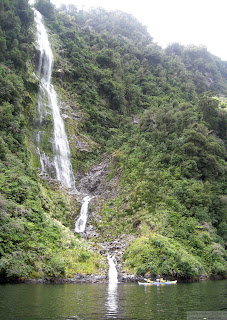 I got back to Te Anu and went out for dinner and drinks with my new kayaking friends at a nice little place in town. A local guitarist was playing in the bar area and the place was packed. Dinner was good, though pricey (this is not a cheap country), and the night was capped off with yet another first for me – my first hitchhike ride without sticking out a thumb.

An American named Kate was hanging out in the bar with us and heard I was headed south to Invercargill the next morning and she was headed that way also. After being assured by my new kayaking friends that I wasn’t an axe murderer, she decided to allow her first hitchhiker and drive me down, once we all pointed out that Kiwis do this all the time – you see, she is planning on moving to New Zealand this year, so we were all just helping to localize her.

Top Monuments and Landmarks to Visit in New Zealand

9 thoughts on “Milford and Doubtful Sounds in New Zealand”