Wanaka ended up being my favorite town on the South Island in New Zealand. Big enough to have plenty of places to eat, shop and stay, but small enough to be completely walkable. It is perched next two one of the two large glacier-formed lakes in the area, and also at the base of some beautiful surrounding mountains. 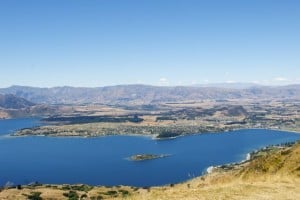 not a great shot, but Wanaka from above

Although I find the place a worthwhile destination in the summer, its claim to fame is as a winter destination, with a number of ski resorts within close proximity. In fact, almost all of the New Zealand Winter Olympic athletes live here.

This was the town that I ran into Nicole, after not seeing or talking to her in the year since we’d originally met in Ecuador. I liked it so much that I ended up staying here for 3-4 days on two separate occasions, coming back here after doing a brief circuit to Milford and Doubtful Sounds and to Invercargill on the southern edge of the country. I didn’t camp there, but there are plenty of great camping spots in the area. It was also the two with the great little local movie theater I wrote about a while back (Movie Time in New Zealand).

Before I left for the first time, I did finally get perfect weather for my first skydive. Good stuff. Surprisingly a completely different feeling than bungee jumping, which is much more frightening. If you are going to do one, go ahead and do both for the comparison.

In tandem skydiving, you are so far from the ground, you don’t get that feeling you get bungee jumping off a bridge, where you can see the ground that your mind is telling you that you are soon going to hit. Plus, in bungee, you are on your own – you have to make the commitment to actually jump.

It is odd to put your legs out of an open door in an airplane, but once you are there, the pro strapped to your back is getting you out of that plane with no assistance or input from you. 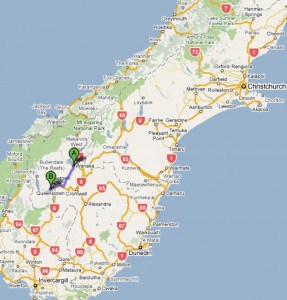 After that excitement – that same afternoon actually – I stuck my thumb out again and ended up quickly getting a ride from Brit living and working back up in the Nelson area I had visited a few days back. I have to say hitchhiking in New Zealand is a lot easier than hitchhiking in most parts of the world.

He was a paragliding instructor (there is a serious abundance of outdoor activities in this country) driving down to Queenstown for a paragliding competition that weekend. Interesting guy. We talked for a while about getting a work visa here, which was easy for him, since Great Britain and New Zealand are part of the Commonwealth, but his German girlfriend had to relocate to Australia, since she couldn’t get an extended visa from here.

One of my favorite quotes in a while was regarding his girlfriend when I asked how he met her. She was taking paragliding lessons at the same place he worked when they started dating. She had then gotten into a horrible paragliding accident, where she had broken a leg, an arm and had numerous facial fractures.

She was hurt badly enough that her family flew her home to Germany for a time, to get some reconstructive work done there. At some point during my questioning him about it, talking about health care in the respective countries and such, he stopped and said, “just to be clear, I wasn’t her instructor.”

He dropped me off slightly outside Queenstown, but it was too far to walk into town, so I quickly got another ride from a local resident. He picked me up and asked where I was staying in town and I told him I didn’t know, so if he could just drop me off somewhere near the town center that would be great.

Queenstown for me can be summed up by his reply when I asked him advice about any good places to eat or drink on town: “I’m sorry, I am a local. We don’t ever go into Queenstown for that. It’s all tourists there – all the time.”

And so it was. I’m not sure I met any Kiwis in the two days I stayed there. Queenstown is touted as the activity center of New Zealand, and it certainly is. You can do one of the world’s highest bungee jumps (the original bungee jump is here also), whitewater raft, book day trips to Milford Sound, and party late into the night like a 20-something year old – which in fact describes the tourist population quite accurately.

I think I’ve decided one of my rules is going to be ‘too young to die, to old to party like a 25 year old.’ Well, it’s more a guideline than a rule.

In this case though, I just simply wasn’t in the mood at all. I’m sure Queenstown is a great place to hang out, but it just rubbed me the wrong way completely, so I hopped on a bus down to Te Anu, which is the small town close to Milford and Doubtful Sounds, which were my next destinations, hopefully for some great traditional New Zealand food as well.