Quick trip down to Invercargill, then back up to the winery area east of Queenstown and south of Wanaka, on the way back up there. Turns out that Kate had some very handy connections in the winery trade, since her brother-in-law runs on of the nicest restaurants in Auckland, so I followed her around for a couple days while she smoozed with various wine making friends and I stood by with a glass in hand. Another bit of good fortune in my hand. I never argue with good food experience or a good wine experience.

After a couple more days in Wanaka, including one excellent night of karaoke featuring an excellent group rendition, or at least a very loud one, of Bohemian Rhapsody, I moved on to Christchurch, the largest city on the South Island by far. Played a little poker there at the local casino and hung out for a few days, then took the short train ride up to Kaikoura (My favorite tour guide, younger division). 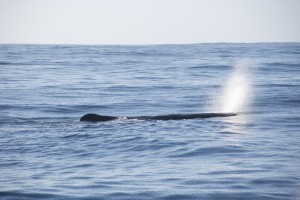 I was only in Kaikoura for a little more than 24 hours and had only one goal in this tiny village – to go on a whale watch trip and see at least one behemoth. The coast of Kaikoura is one of the unique areas (yes, another unique natural wonder in New Zealand) in the world, since just a few miles off shore lies the Hikurangi Trench. It is essentially an extremely deep trench that goes to depths of 3,750 meters (12,300 feet) just a couple miles offshore – deep blue ocean depths. As a result there are sperm whales in this area year-round, and numerous other species that are migrating back and forth between the Antarctic waters and the tropical waters closer to the Equator at different parts of the year. 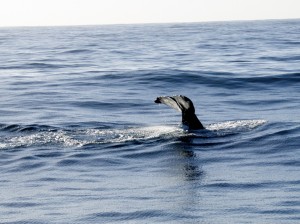 sperm whale about to decend

Sperm whales are pretty fascinating creatures — the world’s largest predator, as one example. It dives up to 3 kilometers (9,800 feet) to hunt. The can dive for up to 90 minutes. Amazing. The guys on the boat said that old whalers called it a sperm whale, because they thought the big cavity in its head was full of sperm. Not sure that is the truth, but pretty funny regardless. Its ribcage is flexible and collapses during dives, due to the seriously high pressures at the depths it goes to. Its favorite food is giant squid and supposedly some of the battles between those two massive creatures at thousands of feet under water are. . . wait for it. . . legendary.

On my boat trip out, I was lucky enough to see two different sperm whales. Unlike some other whales, you don’t see much of a sperm whale on the surface, but when they make their deep dive you can get the quintessential shot of the whale’s tale, but of course my photo editing program is down right now, so I’ll have to upload those pics later.

After the whale watch, I grabbed an evening bus back to Picton to complete the South Island circle, the overnight ferry back to Wellington, and then an all-day bus up to Auckland. Then a day of needed rest, though wishing I was going to do some camping in New Zealand on this trip as well.