I recently finished another book downloaded to my Kindle called Yoga for People that Can’t Be Bothered to Do It by a guy named Geoff Dyer. It is a collection of travel stories and it is a pretty good read.

One of the concepts he talks about is “being in the zone,” which I had previously only thought of in sports terms before. The Zone in sports is when an athlete has a feeling of peace or confidence that manifests itself with a feeling that he or she simply cannot be beaten on that day. You here quotes from baseball hitters along the lines of “the ball looked like a beach ball coming at me — I couldn’t miss it.” Or basketball players saying that the defenders seemed to be locked in concrete or the basket seemed 5 feet across. Or a golfer that can just seem to hit every shot exactly as they imagine in their head before they swing.

It happened to me a few times in days long, long go by when I actually played sports (and my body was less of a wreck than it is now), but you can never experience that feeling too many times. In recent years, it has happened to me at a poker table some — it is as if I can actually see the cards that my opponents have.

Dyer used it in a context that I had never thought of before, in a travel sense. I forget where he said he felt it (yea, I take great notes — there will be a LOT of research needed during the book writing process), but the sense of when he was talking about the zone was similar to how I felt playing sports or poker.

It is a feeling of sublime peace. As if all of the unnecessary distractions in life completely go away. It is truly one of the greatest and most euphoric feelings I have ever experience. Set me to thinking. I’ve now been to 44 countries on this trip. Done a variety of things. Has anything or any place on the trip rose to that level for me? 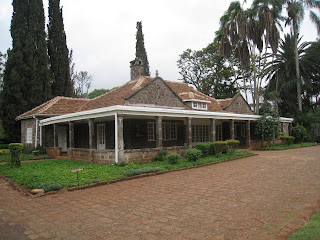 And I realized that there was a place where I did feel that way. The house that Isak Dinesen, a.k.a. Baroness Karen von Blixen-Finecke, lived in for years outside of Nairobi, Kenya.

You probably recognize the picture of the house. It is the same one made famous by the movie Out of Africa

staring Meryl Streep and Robert Redford. The inside of the house is different than the movie, but the exterior shots were basically accurate. I just felt very at ease there — as if I could have lived there for quite some time. Immediately at ease with the place. And the vibe that came from it. I walked through the inside a few times.

The room she wrote in was in the front of the house. Big desk. Large room. So perfect for its purpose. Walked around the grounds lazily for a few hours. I was in the zone. I doubt hardly anyone I know would share that expression for that particular place, but to each his or her own. I’m curious — have you felt that way about a place or an activity on the road?? I’d love to hear yours. Thanks, Michael

My home away from home — Girona and Costa Brava

Article from home about my trip

Chile and the time zone